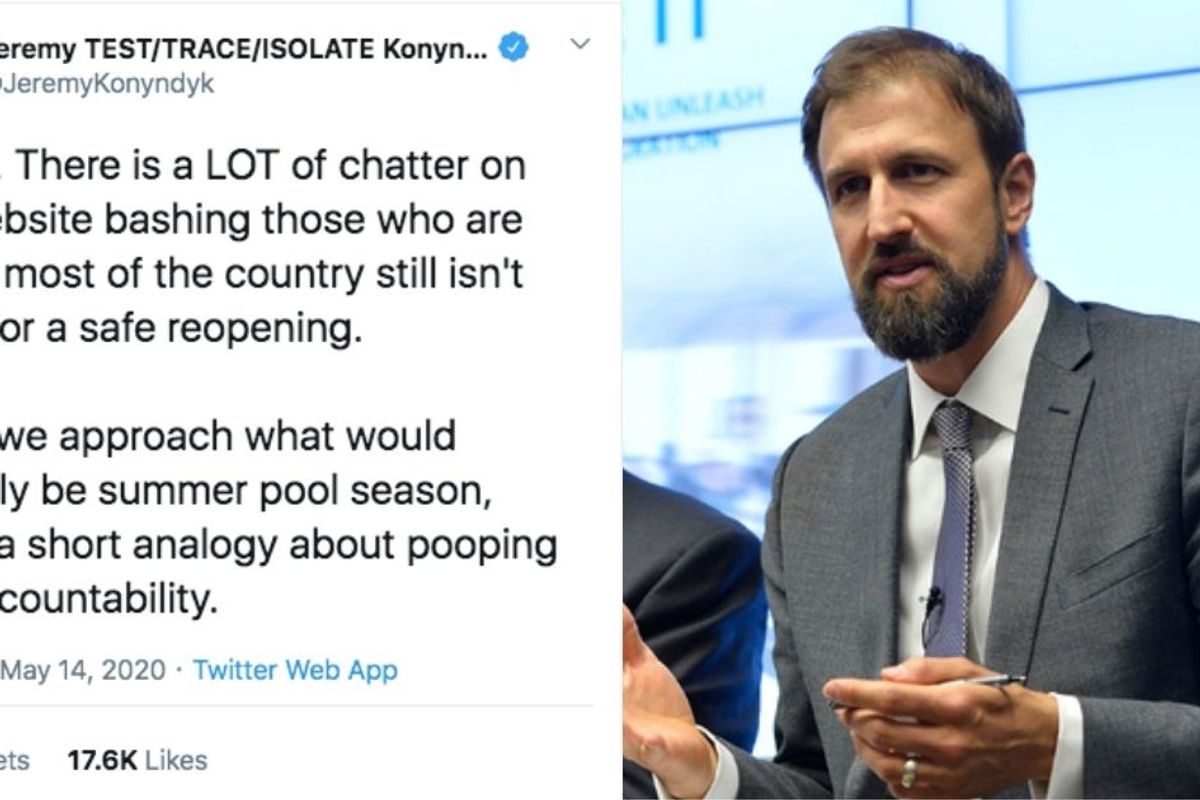 As the U.S. begins to reopen after two months of shutdowns due to the coronavirus pandemic, people are understandably concerned.

Well, some people are. Some people seem to think that the shift to reopening the economy means the virus has miraculously disappeared, that 100,000 Americans dead while we were in lockdown is nothing to worry about, and that those of us who are wary about people going back out into the public are a bunch of fear-mongering worry warts.

Jeremy Konyndyk, global outbreak preparedness and humanitarian response expert and former director of USAID's Office of US Foreign Disaster Assistance, offered an explanation on Twitter for the folks who don't seem to understand the concern—"a short analogy about pooping and accountability."

"Alright. There is a LOT of chatter on this website bashing those who are saying most of the country still isn't ready for a safe reopening. So, as we approach what would normally be summer pool season, here's a short analogy about pooping and accountability.

Imagine you're at the pool, and a kid poops in the water. It happens a few times every summer. What happens next? Everybody clears the pool. That's the initial step to protect people from the poop.

But it's not the end of the story.

There's a next step - some poor soul on pool staff has to go fish out the poop. It's a pretty thankless job.

Then they have to shock the pool with chlorine to kill off bacteria.

And then everyone waits half an hour or so til it's safe to swim again.

You can see where I'm going with this.

If the lifeguards tell everyone to clear the pool, but the pool staff declines to actually get rid of the poop, what happens?

No one can go back in. The poop is still there. Limbo.

Whose fault is it that it's not safe to go back in the water? Who is accountable?

Do you focus on the people saying "clean up the poop before we can go back in safely!"?

Or do you focus on the staff whose job it is to clean up the poop?

And what would you think if the staff started saying - look, just get back in. Be a warrior.

The answer is pretty obvious.

So right now, our country is a big swimming pool with a poop problem.

And the President, rather than fix the mess, is urging everyone back into the pool regardless and saying the 'real' problem is those people who think the pool's not safe yet. They must hate the pool, etc.

And a lot of the public is buying it!!

The President's whole play here is to distract from his failure to fix the mess by focusing the country's attention on people who don't want to swim in a pooped-in pool.

He wants you to believe they're saying you should never go back in.

And if you buy that, he's off the hook. He doesn't have to clean up the poop, and he doesn't get blamed for failing to do so. Win-win for him.

But NO ONE is saying 'never go back in the pool.' They're saying - please clean out the poop first.

And if you're frustrated that we can't, please hold the right folks accountable. The problem isn't the people saying we need to reopen 'safely.'

It's the people saying needn't bother with that part."

Exactly. Without getting cases down to a level where robust testing, tracing, and quarantining procedures will enable us to contain outbreaks when and where they occur, we're just heading into a poop-contaminated pool.

And Konyndyk is right—all of us want the economy to reopen. We all recognize the fact that people are suffering and unemployment is terrible and that lockdowns with no end in sight are not sustainable. However, opening up too quickly and before we have the necessary measures in place to get a handle on outbreaks as they occur will simply put us back to where we were two months ago—facing a pandemic with the potential to injure and kill huge numbers of people. If we just toss up our hands now and say, "Welp, whatever happens happens—if people die, oh well," we will have tanked the economy for no reason.

Let's at least get the poop out of the pool before we start inviting people back in. Reopening is going to have to happen at some point, in some measure, but if we don't do it slowly and safely, we're just asking for a crappier outcome in the long run.