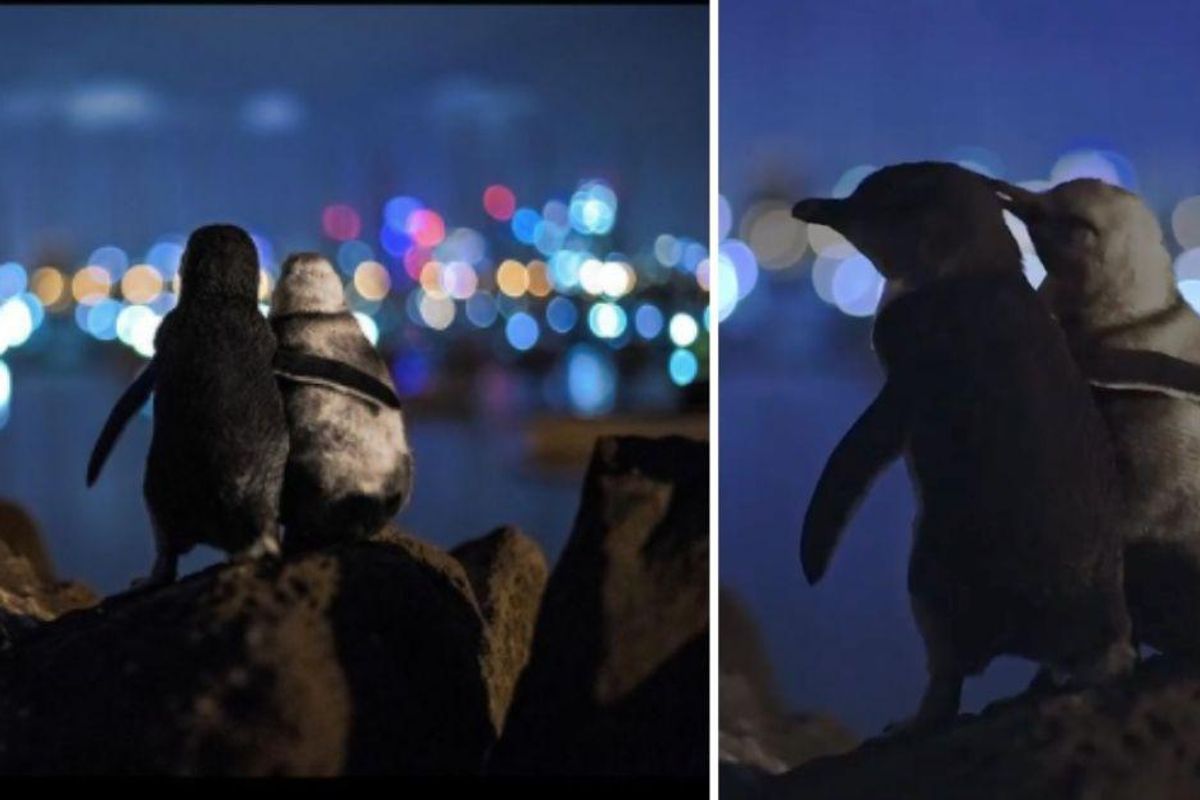 Forgive me as I wax rhapsodic about penguins, but this truly is just the sweetest thing.

Photographer Tobias Baumgaertner has captured hearts around the world with his photo of two fairy penguins, one with its flipper around the other, as they appear to stare at the lights of Melbourne, Australia across the water. At first glance, one might assume that Baumgaertner just got lucky, snapping the photo just as one penguin was stretching or something, but videos he shared on Instagram show how genuinely touching the moment really was.

According to BBC News, St Kilda Pier in Melbourne is home to a colony of around 1,400 fairy penguins, the world's smallest penguin species, and the population is monitored by volunteers. One of them approached Baumgaertner as he was shooting and told him that the white penguin was an elderly lady who had lost her partner and the younger male to the left had also.

"Since then they meet regularly comforting each other and standing together for hours watching the dancing lights of the nearby city," Baumgaertner wrote on Instagram. "I spend 3 full nights with this penguin colony until I was able to get this picture. Between not being able or allowed to use any lights and the tiny penguins continuously moving, rubbing their flippers on each other's backs and cleaning one another, it was really hard to get a shot but i got lucky during one beautiful moment."

"The way that these two lovebirds were caring for one another stood out from the entire colony," he wrote in another Instagram post. "While all the other penguins were sleeping or running around, those two seemed to just stand there and enjoy every second they had together, holding each other in their flippers and talking about penguin stuff."

The photo, which was actually taken in 2019, recently won the Community Choice award in Oceanographic magazine's Ocean Photograph Awards.

Baumgaertner also shared a video of the penguins, showing how close they were. However, he also shared a caveat about anthropomorphizing animals too much.

"I am a dreamer," he wrote. "I believe that it is important to have dreams as they make life worth living and give love meaning. I previously shared these penguin images to spread love because that, I believed, is what the world needed most right now. It was never intended to be scientifically accurate as it was quite obviously romanticized by adding my personal feelings of being separated from and longing for the one I can't live without. I wrote these words from the bottom of my heart and never expected so many people to connect with them.

Like with anything else in life too much of one thing has the potential to become dangerous and while we don't know what goes on in these little penguins I've been advised by the scientific community that anthropomorphizing animals can have a negative influence on them as it "can... lead to inappropriate behaviors towards wild animals". This is especially the case for animals living in such close proximity to the city as they are already dealing with various challenges. I have further been advised that these two could be related, ...the exact relation of these two is at this point probably hard to figure out but I am happy to hear that if they are not friends then they might at least be family.

Either way I believe that this was a truly beautiful and magical moment that spread so much love around the world. I also believe that humans protect what they can connect with and it acts as a reminder that we share this beautiful world with many other beings which come in various shapes and sizes, degrees of fluffiness and colors as well as with specific needs crucial for their survival. It presents us with just one of many reasons why we should protect the ones with no voice to stand up for themselves and most importantly it has shown us that if we care and come together we could change the world..."

Indeed, as the world reels from the widespread losses from the coronavirus pandemic, we need all the comfort we can get. If that comes in the form of a penguin photo that touches on the grief so many are experiencing and the connections that bring joy to our lives, so be it.

Several photos of the penguins are available for purchase on Baumgaertner's website.

From Your Site Articles
Related Articles Around the Web
inspiration