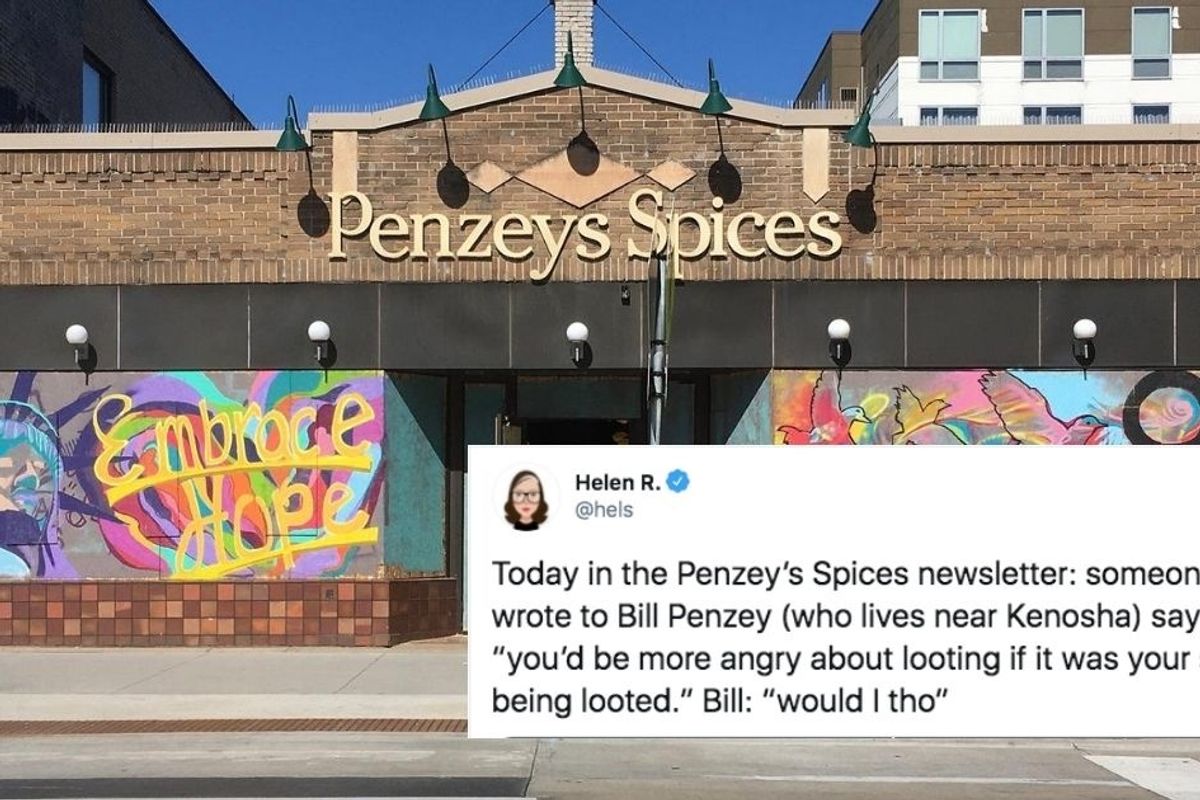 Going against most standard business advice, Bill Penzey has never hesitated to make his beliefs known to the people who buy his products. The outspoken CEO of Penzey's Spices, America's largest independent spice retailer, made headlines when he directly called out President Trump's racism after his election, and this February he published a public statement decrying the "corruption and cruelty" he says have taken over the Republican party.

Penzey, whose business headquarters reside just outside of Milwaukee, has been openly supportive of the protests against racial injustice taking place all over the nation. But after protests in Kenosha became riotous, someone wrote him a letter suggesting that if it were his store being looted, he'd be singing a different tune.

Bill Penzey pondered this idea. Then he sent out a letter to subscribers and explained that no, he actually wouldn't.

"Someone wrote to say that you would be singing a different tune if it was your store being looted. I'm by no means perfect but seriously no, I wouldn't. Human life means everything; stuff, not so much.

Hearing that the NBA Milwaukee Bucks, in response to yet another police shooting of a Black man, this time just south of Milwaukee in Kenosha, Wisconsin, chose in unison to walk away from yesterday's playoff game and were willing to take the loss, for me brought such s asens of hope that the tide will no longer stay unturned.

I agree with them. To me today just feels a lot like April 4, 2018, the fiftieth anniversary of Dr. King's assassination. That day we paid our people and kept things shut because that was not a day for commerce. After some early inquiries about doing the same today it became clear that we were able to do that because we planned ahead and because it was a time before the Coronavirus. To do that today would mean calling to reschedule all of today's touchless pickup orders. As parents of young kids entering back to school phase with all the extra hoops the virus demands, I get that now is not the time to add extra burdens. So no shut down today.

But what to do? My mind went to that idea that we would feel differently if it was our store that was looted. When I asked around: "What if we looted our own store?" What if we took a snapshot of our Kenosha store's inventory tonight and simply gave away exactly that amount of inventory in the coming weeks? Unlike the Minneapolis Uptown store that was in the center of things, our Kenosha location is out by the highway and does not have much chance of looting itself. What if we just gave our spices and seasonings to food pantries and gift boxes to organizations trying to raise money to fund change?

Everyone here was like yes, let's do that. Even my mom at dinner last night cheered on the idea. And as much as we could just look online for worthy recipients, with so many customers in the Kenosha area I would like to start with asking for your suggestions of where things should go...

And please learn the difference between those who simply say law and order over and over again and those who do the hard work of actually achieving it. Until we have a president that respects the laws of this country we won't have order; it's that simple.

And once again, hats off to the Milwaukee Bucks. So much of America's future comes down to voter turnout in the city of Milwaukee. That the members of the Bucks are time and again working to earn the moral authority to ask for that Vote is something big. That their voices reach out to our suburbs and beyond is honest cause for hope. Well done.

And please send your thoughts to those living through the horrors of Hurricane Laura right now. They will need our compassion.

Thanks for healing the world.

And for the record, Penzey's has actually already been affected directly by looting, which is what he's referring to when he mentions the Minneapolis Uptown store. "If sweeping up some glass and replacing a couple windows is a piece of everybody realizing the costs of racism-fueled police violence towards minorities is no longer affordable, then so be it," Bill Penzey wrote in an email to customers at the end of May, after the Minneapolis store suffered property damage and looting in the aftermath of the George Floyd killing.

This is what they did with their boarded up windows:

Way to use your platform and power as a business owner to advocate for change and support those on the ground doing the work, Bill.