People are becoming organ donors in droves thanks to this heroic hockey player. 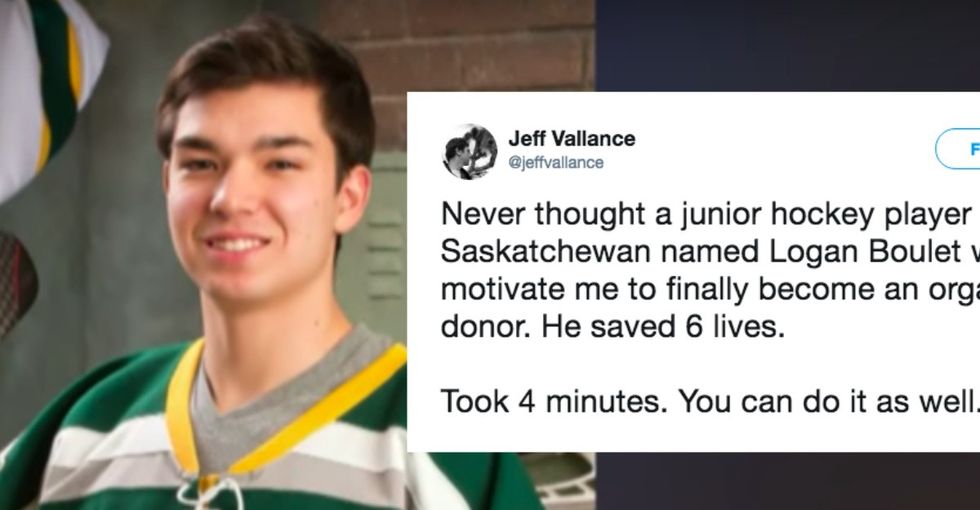 Logan Boulet was one of the Canadian hockey players who passed away after a horrific bus accident.

The Humboldt Broncos' team bus collided with a semi-truck traveling to a play-off game in central Saskatchewan on Friday, April 6. 15 people, including the bus driver, team coach, and several players — were killed.

Just a few weeks ago, on his 21st birthday, Boulet made a heroic decision. He signed up to be an organ donor.

"[Boulet] is a great hero and one of the nicest people you would have been lucky enough to meet," Neil Langevin wrote. "Logan had made it known, and very clear to his family, that he had signed his organ donor card when he turned 21 just a few weeks ago."

According to Langevin, six people in need will receive organ transplants from Boulet.

As with many families across the globe our house is devastated with the news about the Humboldt Broncos. Our great...

Boulet's parents confirmed the positive matches for six of their son's organs to Global News on Saturday. "Even in his eventual passing, he will be a selfless hero," they said in a statement.

A hero whose generosity may save many more lives down the road.

Boulet's selfless act appears to have inspired many to follow his lead, as organ donor sign-ups surged across Canada.

According to a spokesperson for Alberta Health Minister Sarah Hoffman, the province saw a "significant increase" in organ donor registrations over the weekend, the Calgary Herald reported. Nearly 900 people registered between Sunday and Monday — over double the number those days of the week typically see on average. Similar spikes in sign-ups were reported in British Columbia and Ontario, according to CBC News.

Some used social media to express how Boulet inspired them to act. "Never thought a junior hockey player in Saskatchewan named Logan Boulet would motivate me to finally become an organ donor," Jeff Vallance of Alberta wrote on Twitter. "He saved 6 lives. Took 4 minutes. You can do it as well."

While almost all Canadians support the cause of organ donation, just 20% of the country is actually registered as donors. In a country where 4,500 people are waiting on life-saving organs, the surge in sign-ups is welcome.

Americans waiting on the organ transplant list face a similar predicament. More than 116,000 people are waiting on an organ transplant in the U.S., according to the Department of Health and Human Services. More registrations now will save lives in the months and years to come.

Watch a report on Boulet's story from the CBC's The National below:

To learn more about becoming an organ donor in the U.S., visit the Department of Health and Human Services website.