​​People are commiserating about the absurd unaffordability of COBRA health insurance 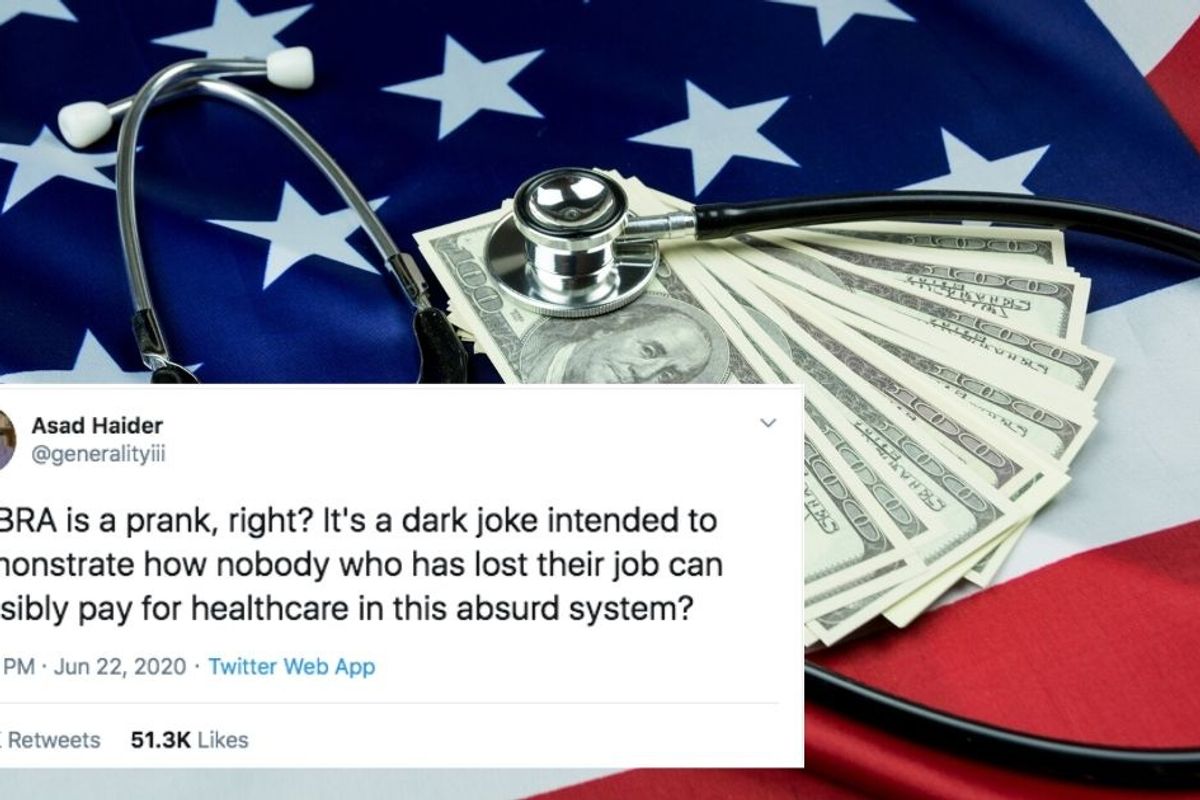 It's no secret that the way healthcare is handled in the United States is a mess. We are the only developed nation without guaranteed universal healthcare coverage. We tie health insurance to employment, which is silly, and we pay far more than citizens of any other nation for medical care that doesn't even result in great outcomes. Even the Affordable Care Act, which helped people who previously couldn't be insured get insurance, comes with a high cost in certain states.

When I talk to people in countries with universal healthcare, they're often baffled by the inane way our system works. But my favorite part is when I tell them, "Wait til you hear about COBRA."

If you've always had a job with insurance, you may have never needed COBRA—which stands for Consolidated Omnibus Budget Reconciliation Act, and is every bit as "Huh?" as the name suggests. Basically, if you lose your job, you lose your employer-provided health insurance. But lucky you, you can keep it for a buttload of money through COBRA. And that's supposed to be a good thing, somehow. Like, people say, "Well, at least you can get COBRA," when you lose your job—as if it's a gift to pay out the nose to keep your insurance when you just lost your income.

A thread on Twitter highlights the absurdity of the whole concept.

I cannot understand how anyone thought it would be mathematically possible to lose your income, still have to pay r… https://t.co/LmMHtQVvJG
— Asad Haider (@Asad Haider)1592853546.0

People rightly pointed out how unsustainable our system is, and how ridiculous it is to think that people who have lost a job can afford to pay even MORE for health insurance than they did when they were employed.

@generalityiii This is exactly why half of all Americans want a single payer healthcare system. When it's all laid… https://t.co/cc7amok9nf
— Jeff Waldorf (@Jeff Waldorf)1592927600.0

Others shared their personal stories.

Others pointed out how it came about and why it feels like it's almost designed to be a punishment.

Seriously, how can someone who has just lost their income afford this?

But the whole thing can basically be summed up by this tweet:

Come on, America. Universal healthcare. Everybody's doing it. And the vast majority of Americans want it. It's an idea whose time has come. And gone. And come back around again. Ad nauseum.

No one should go into debt or die because they can't afford health insurance or health care. It's a travesty that we have not figured this out long before now.

From Your Site Articles
Related Articles Around the Web
health