People are debating what 'appropriate' fatherly love looks like, and frankly, it's just sad 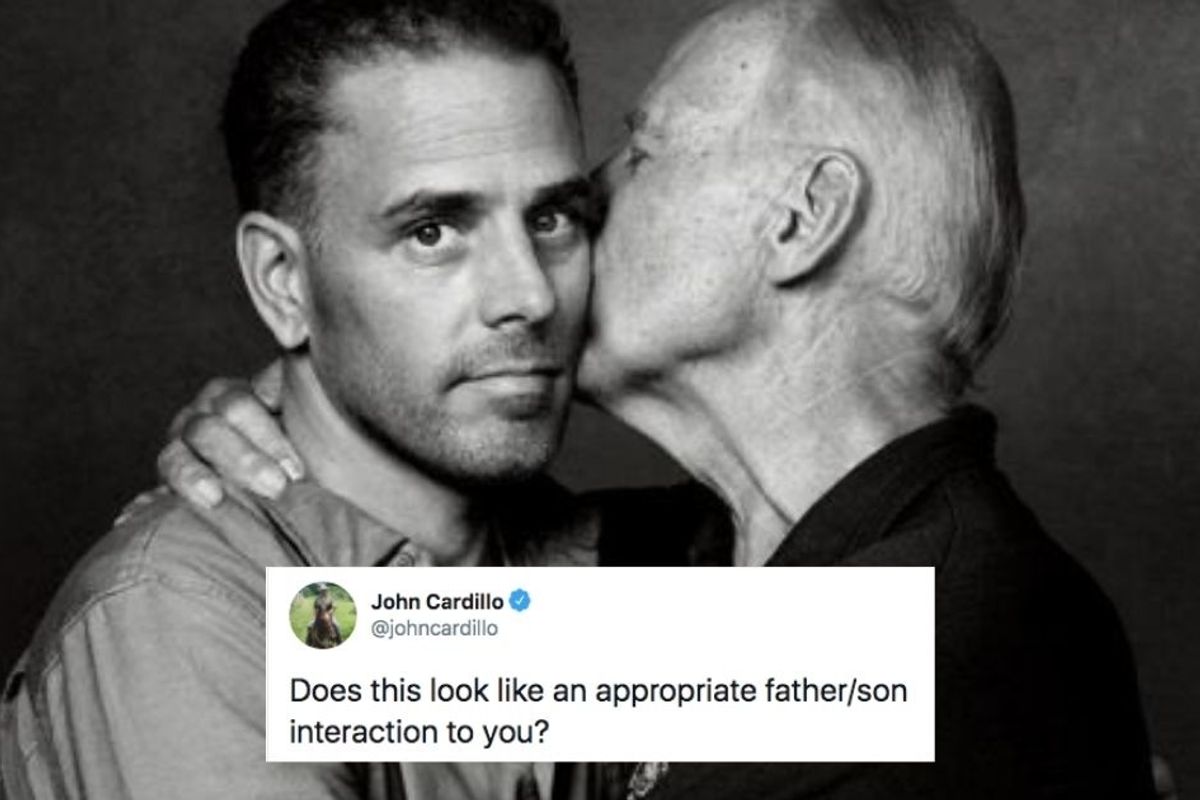 A photo of Joe Biden hugging and kissing his only living son, Hunter, is circulating after Newsmax TV host John Cardillo shared it on Twitter with the caption, "Does this look like an appropriate father/son interaction to you?"

The question is clearly meant to be a dig at Biden, whose well-documented life in politics includes many examples of both his deep love for his family and his physical expressions of affection. While his opponents have cherry-picked photos to try to paint him as "creepy," those who know him well—and who are in some of those viral images—defend Biden's expressions of affection as those of a close friend and grandfatherly figure. (And in fact, at least one photo of Biden holding and kissing a child's face was of him and his grandson at his son Beau's funeral, taken as a still shot from this video.)

Everyone has their own level of comfort with physical space and everyone's line of what's appropriate when it comes to physical affection are different, but some accusations of inappropriateness are just...sad. And this photo with this caption is one of those cases.

Does this look like an appropriate father/son interaction to you? https://t.co/XDMIsgjUKI
— John Cardillo (@John Cardillo)1603327529.0

What people see when they look at this photo says a lot more about them than it does about the father and son in it. And the reactions on Twitter made that point crystal clear.

A therapist weighed in, saying "if anyone looks at this photo and sees anything other than father + son love, I'd recommend therapy until the person knows [the difference between] healthy + unhealthy touching."

Some people pointed out that this kind of affection from a father to a son is something the world needs more of, not less.

Others just matter-of-factly said, "Umm, yes." Like, what is he seeing that he things isn't appropriate?

Not that it wouldn't be appropriate if this weren't the case, but knowing the tragedy this father and son have been through adds greater context to this photo. Biden lost his wife and Hunter lost his mother in a car accident when Hunter was little. And Biden lost a son and Hunter lost his only brother in 2015 when Beau Biden died of brain cancer.

This is a father-son affection that includes a bond that only those who have shared severe loss can know.

Many people shared how the photo made them miss their own fathers and wish they could have one more hug or kiss from their dad.

@RedHourBen @johncardillo I would love to be able to have my father kiss me. He died 32 years ago and I miss him every day.
— James Fraunberger (@James Fraunberger)1603392226.0

@Leslieoo7 @johncardillo My father died when I was 16 years old. I’d give anything for him to be here now, holding me like this.
— Carlos Escondido (@Carlos Escondido)1603330858.0

In addition to pointing out the hypocrisy of Trump supporters trying to paint Biden as inappropriate when there is no shortage of photos of Trump in eyebrow-raising photos with his kids—including one with Ivanka and Eric as kids standing next to Jeffrey Epstein—some people shared how a lack of fatherly affection might explain how people see Trump.

Several people suggested that Cardillo sees the photo the way he does because he himself has daddy issues.

And in one response, Cardillo almost appeared to confirm it, only denying a small, unrelated part of a tweet suggesting he'd been mistreated by his own father.

The fact that anyone would look a photo of a loving father embracing his son and kissing him on his cheek and think "Ew," is truly sad.

Unfortunately, we live in a society where men showing affection is viewed negatively by some people, whether due to toxic ideas of masculinity or homophobia or both. We also live in an era of poisonous partisanship that pushes people to view those on the other side of the political spectrum as evil. Combine that with the QAnon conspiracy theorists obsession with pedophilia, and we've ended up with one of the nicest and most decent men in politics being smeared with posts like this.

Clearly, some people need more parental love in their lives.

From Your Site Articles
Related Articles Around the Web
family