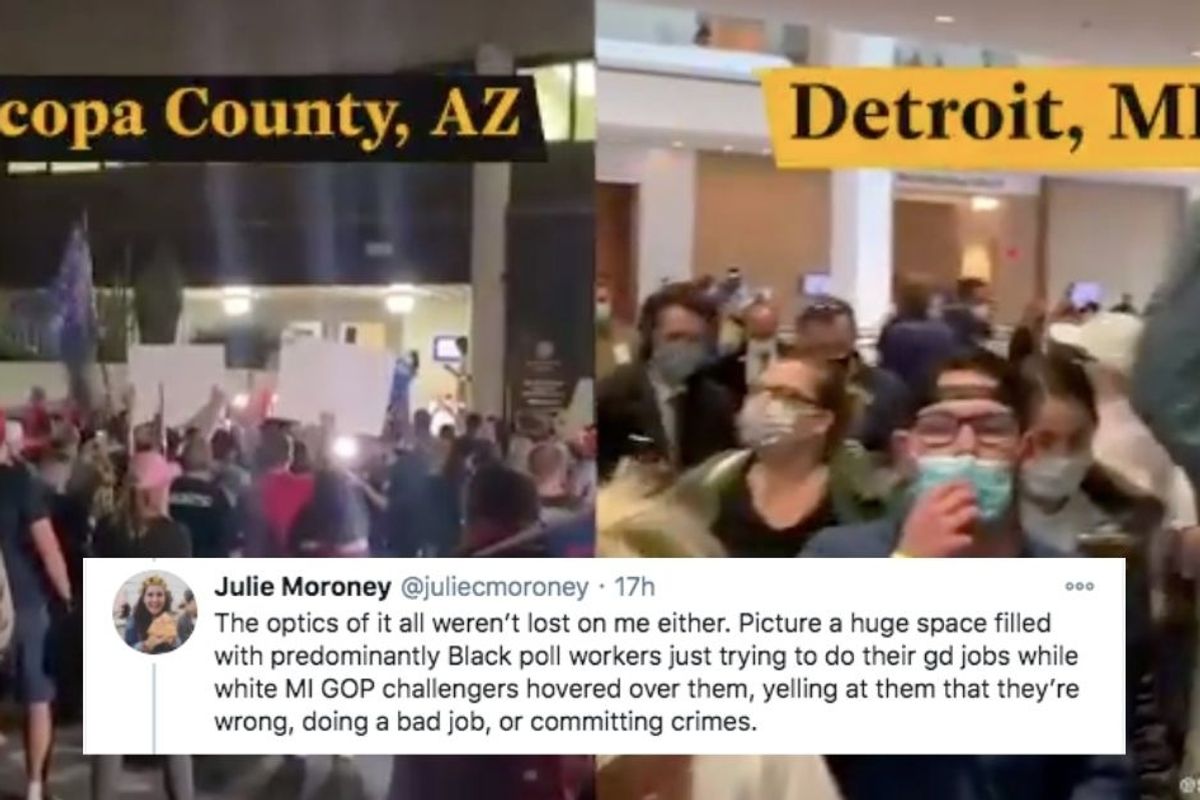 Election 2020 is turning out to be just as batsh*t crazy as 2020 itself, which of course isn't surprising, but certainly is annoying.

Due to Trump's baseless claims that the election is rigged against him and that if only legal votes were counted he'd be winning, states and counties that have spent years honing their elections to make them as secure as possible, that rallied to adjust their systems to accommodate the needs of voters in a global pandemic, and that have managed to pull off hundreds upon hundreds of elections without widespread fraud now have to battle a president publicly attacking the integrity of our entire electoral process.

And that has been happening in ballot counting centers across the nation. Unfortunately, so has some ridiculous tomfoolery from the Trump camp.

Julie Moroney is a law student who answered the call for non-partisan poll watchers in Detroit, Michigan, and she shared on Twitter what she experienced as she watched Wayne county ballots being counted.

She demanded that the poll workers stop what they were doing and backup all computers in case of power outage or to… https://t.co/8ezILw6wfz
— Julie Moroney (@Julie Moroney)1604634355.0

"I was at the TCF Center in Detroit yesterday as a non-partisan poll challenger. The woman in the maroon shirt with the black mask was one of the GOP challengers I monitored. At one point, she yelled that a ballot needed to be thrown out because it 'looked sticky.' Another time she demanded that the poll workers stop what they were doing and backup all computers in case of power outage or tornado(?). Just baseless, bad faith challenges to slow the process.

And after Trump filed his lawsuit and MI was called for Biden, the GOP strategy shifted to challenge every single ballot. I know this because I overheard their organizers pass on the new message. They didn't even pretend to have a reason for doing so, just repeated 'I challenge this ballot; I challenge that ballot' over and over again as the poll workers tried to count.

At one point, my good friend and law school classmate @sumnertruax looked over at me and said 'this is not how democracy is supposed to work.' It was so true, and so sad. The optics of it all weren't lost on me either. Picture a huge space filled with predominantly Black poll workers just trying to do their gd jobs while white MI GOP challengers hovered over them, yelling at them that they're wrong, doing a bad job, or committing crimes.

The harassment and intimidation — both from the GOP challengers in the room and the GOP supporters banging on the w… https://t.co/H4bAzDgcwM
— Julie Moroney (@Julie Moroney)1604634356.0

The harassment and intimidation — both from the GOP challengers in the room and the GOP supporters banging on the windows trying to get in — is seared onto my brain. Security guards had to escort us out a side entrance so we could leave the building safely.

One of the most jarring things was stepping outside of the building and seeing the sun set across the river in Canada. The juxtaposition of exiting the epicenter of 'American democracy' that felt more like mob rule and seeing the Canadian flag gently flap in the wind a mile away, An example of a functioning democracy...the irony was painful.

I left exhausted, but mostly just sad. I love America, but some of you make it so hard.

Poll workers are seriously patriotic heroes right now. What is usually a tedious-but-necessary job has suddenly become a target for quacks and fanatics who simply can't believe that the most unpopular president since Gerald Ford could possibly fail to be reelected in a fair election. Why? Because Trump says so. It's really that simple.

No one disagrees that legitimate concerns about ballots and votes should be investigated—when there is evidence. Yes, there are occasional irregularities in every single election, and those should be looked into. But you can't just stand behind the presidential podium and claim the election is rigged or fraudulent or stolen because you're losing or because the electoral system that has successfully elected 45—soon to be 46—presidents isn't being run exactly the way you want it to be.

As Moroney's fellow poll watcher said, "This isn't how democracy is supposed to work." Indeed, it is not. And the fact that the dysfunction is coming from the president himself is the saddest thing of all.