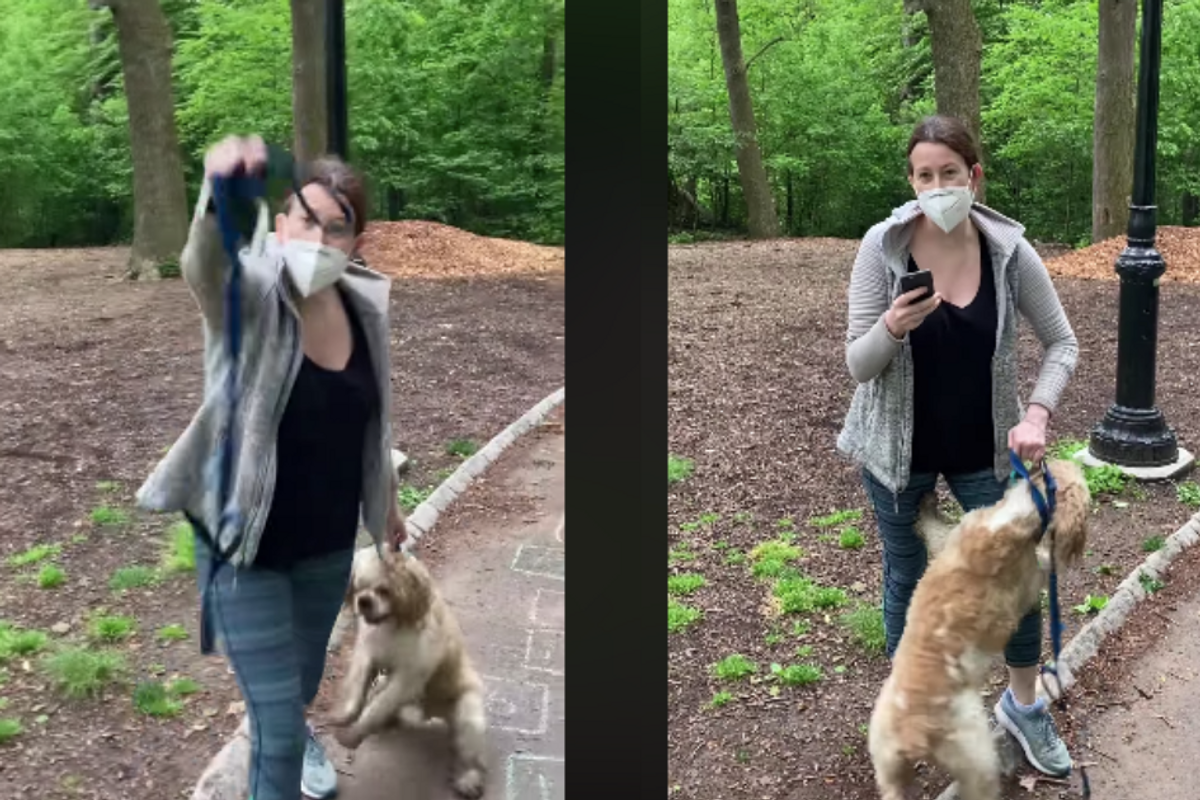 Yet another video of yet another white woman calling the police on yet another black person is making the rounds, and by now we should all be able to sing along to the familiar tune. It's like the worst song ever written but it's played so often you can't get it out of your head.

Intro: White woman ignores a rule everyone is asked to follow.

Verse 1: White woman gets angry when a black person points out that the rule actually does apply to her.

Verse 2: White woman gets aggressive when the black person starts gathering video evidence of her response.

Chorus: White woman calls the police, turns on the waterworks and claims that the black person calmly filming her tirade is, in fact, threatening her life.

This week's video shows Amy Cooper, a white woman who had her dog off-leash in an area of Central Park that required a leash, calling the police on Christian Cooper (no relation), a black birdwatcher who told her she needed to put her dog on a leash. The video is striking, from the man having to repeatedly tell the woman, "Please step away from me" as she approached to the hysteria in her voice as she told the police—repeatedly—that "an African-American man" was threatening her life.

Christian Cooper wrote in a post her shared on Facebook with video of part of the encounter:

"Central Park this morning: This woman's dog is tearing through the plantings in the Ramble.

ME: Ma'am, dogs in the Ramble have to be on the leash at all times. The sign is right there.
HER: The dog runs are closed. He needs his exercise.
ME: All you have to do is take him to the other side of the drive, outside the Ramble, and you can let him run off leash all you want.
HER: It's too dangerous.
ME: Look, if you're going to do what you want, I'm going to do what I want, but you're not going to like it.
HER: What's that?
ME (to the dog): Come here, puppy!
HER: He won't come to you.
ME: We'll see about that...

I pull out the dog treats I carry for just for such intransigence. I didn't even get a chance to toss any treats to the pooch before Karen scrambled to grab the dog.

That's when I started video recording with my iPhone, and when her inner Karen fully emerged and took a dark turn..."

There's so much that we could dissect about this story, but it's not like we haven't see this before. Predictably, there has been huge public outcry over the incident. Predictably, Amy Cooper issued an apology, telling CNN, "I'm not a racist. I did not mean to harm that man in any way." Predictably, some white folks have expressed more concerned over the woman's treatment of her dog than they were over her putting a black man's life in danger.

I have no doubt that this woman doesn't think she's racist. Most white folks don't think we are. The only white people who openly acknowledge our own racism are blatant white supremacists and those who recognize that racism is woven into our social DNA. And doing something racist, then immediately saying "I'm not a racist"—as if the identity of being a racist or not is the issue and not the fact that your actions were undeniably racist—is, again, a predictable pattern.

That's going to keep happening until enough white Americans acknowledge that racism lives in all of us. We are citizens of a country founded during the heyday of the transatlantic slave trade, a country whose most celebrated history is completely inseparable from the enslavement of black people, a country whose bloodiest war was fought over whether or not white people had the right to own people based on the color of their skin. We can't change that history, but we have to acknowledge how that foundation—and the centuries of systematic oppression of black people in America that followed—have impacted us and continue to impact us.

Hell, even the fact that this white woman and this black man share the same last name hearkens to the disturbing possibility that they might have historical ties to one another, as it was common for black Americans to take the last names of the people who enslaved them.

I've seen people attempting to defend this woman, saying she simply acted out of fear. But the way she says, "I'm going to tell them that an African-American man is threatening my life," is chilling. It indicates that she knew that telling the police his race would have a specific effect. She used the image of a black man threatening the life of a white woman as a weapon against a man who politely asked her to stop approaching him and who simply wanted her to put her damn dog on a leash, per the park's rules.

What's most telling is the dichotomy between the fear this woman purposely portrayed on her phone call and the actual power she is wielding as she does it. Angry at being called out for breaking the rules and being filmed for her reaction, she used her white woman privilege to make a phone call to the police as if they were her personal customer service line, flipping from aggression to victimhood at the drop of a hat, knowing that her side of the story was more likely to be believed than his—even with video evidence to the contrary being collected in real-time. This is everyday racism in action.

And from all appearances, Christian Cooper just wanted to be able to birdwatch without an unleashed dog mucking things up. He told CNN that he would accept Amy Cooper's apology: "If it's genuine and if she plans on keeping her dog on a leash in the Ramble going forward, then we have no issues with each other." But an apology doesn't go nearly far enough here, in my opinion.

As with all viral videos dealing with racism, I hope we all learn something from seeing this play out. I hope my fellow white Americans are able to see how egregious her behavior was, how the racism that festers beneath the surface of the white American subconscious reared its head to display its power here, how saying "I'm not a racist" is just a string of meaningless words that don't belong in an apology for racist actions. I hope people can see the pattern as predictable at this point—a truth that has been shared by black thought leaders over and over again but keeps falling on deaf ears. I hope people who see all of this seek out anti-racism resources to educate themselves. (This Google doc is a good place to start).

I hope that we realize how well we actually know the song at this point, and get so sick of it that we start singing an entirely new tune.