Republicans and Democrats should never forget what Paul Ryan said about the poor. 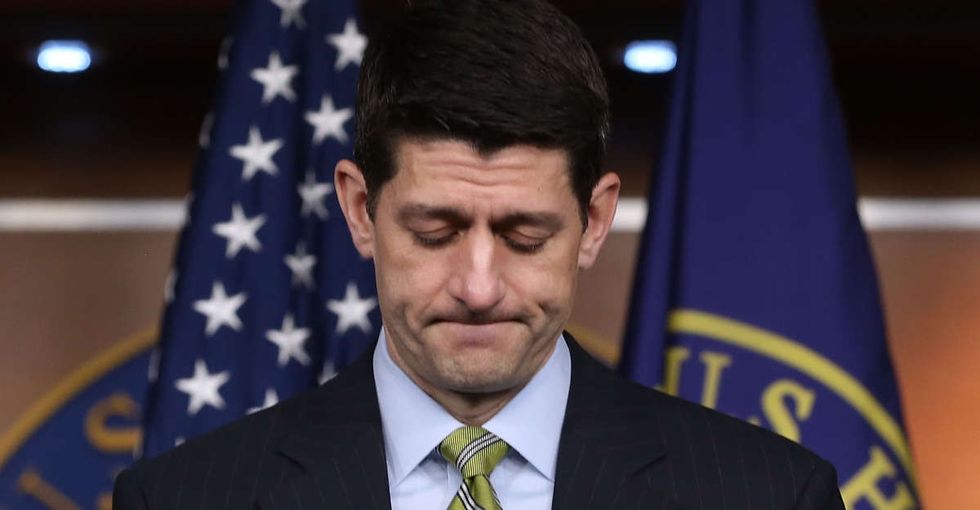 Rep. Paul Ryan did something that is all too rare in politics.

He admitted he was wrong.

For a long time, Ryan (R-Wisconsin) had divided Americans into two groups: "makers," working people who contribute to society, and "takers," (mostly) poorer people who depend on government benefits.

A Florida woman looks for a job at a placement office in 2014. Photo by Joe Raedle/Getty Images.

Here's how he put it at a fundraiser in Wisconsin in 2012:

"Do you want the American idea of an opportunity society with a safety net where you can take a risk, start a business, make a difference, succeed and be honored for being successful? Or do we go down the path the president is proposing — a social welfare state, a cradle-to-the-grave society where we have more takers than makers."

And here's how he framed it earlier, speaking to a fellow Republican congressman in 2010:

"Right now about 60 percent of the American people get more benefits in dollar value from the federal government than they pay back in taxes. So we’re going to a majority of takers versus makers in America and that will be tough to come back from that."

But this year, Ryan had a revelation: Most people don't take government aid because they like free stuff. They take it because they need it to survive.

A girl pays for food with an EBT card. Photo by Andrew Burton/Getty Images.

According to the USDA, in 75% of all households that both received food stamps and had a member who was able to work, that person had a job in the year before or after receiving the benefit.

How did Ryan realize he was wrong? By listening to actual poor people.

A New York City man guides a cart of recyclable cans down the street. Photo by Jewel Samad/Getty Images.

Here's what he had to say in his speech. It's really, really different than the way he's framed the issue many times before (emphasis added):

"There was a time that I would talk about a difference between 'makers' and 'takers' in our country, referring to people who accepted government benefits. But as I spent more time listening, and really learning the root causes of poverty, I realized something. I realized that I was wrong. 'Takers' wasn’t how to refer to a single mom stuck in a poverty trap, trying to take care of her family. Most people don’t want to be dependent. And to label a whole group of Americans that way was wrong. I shouldn’t castigate a large group of Americans to make a point."

It's not just poor people who benefit from government assistance. Most of us do at some point in our lives.

The thing is, we're often unaware of it, according political scientist Suzanne Mettler, whose arguments were summarized by The Washington Post in 2015. That's because the benefits that most of us receive — for things like housing and health care or through the GI Bill, if we're veterans — often come to us through lower tax bills rather than as cash handed directly to us.

If we live long enough, most of us will eventually collect Social Security or have our medical bills paid through Medicare.

There's still plenty not to love about Ryan's approach to poverty, which doesn't do much to reflect his change of heart. Yet.

His 2014 anti-poverty plan still includes provisions that make the poorest Americans jump through hoops in order to receive benefits while wealthier Americans continue to receive tax credits for things like mortgages and college tuition "just because."

But at least where his thinking is concerned, he's starting to get it. And that's progress.

As Ryan said in his speech, "People with different ideas, they're not traitors. They're not our enemies. They're our neighbors."

It's possible to disagree with Ryan — on this or even on most things — and still believe he deserves credit for listening, grappling, and changing his tune on the poorest Americans.

You can watch Ryan's full address here. The important part starts at 9:40: