Residents fought over a Confederate statue for months. Hurricane Laura made the final decision. 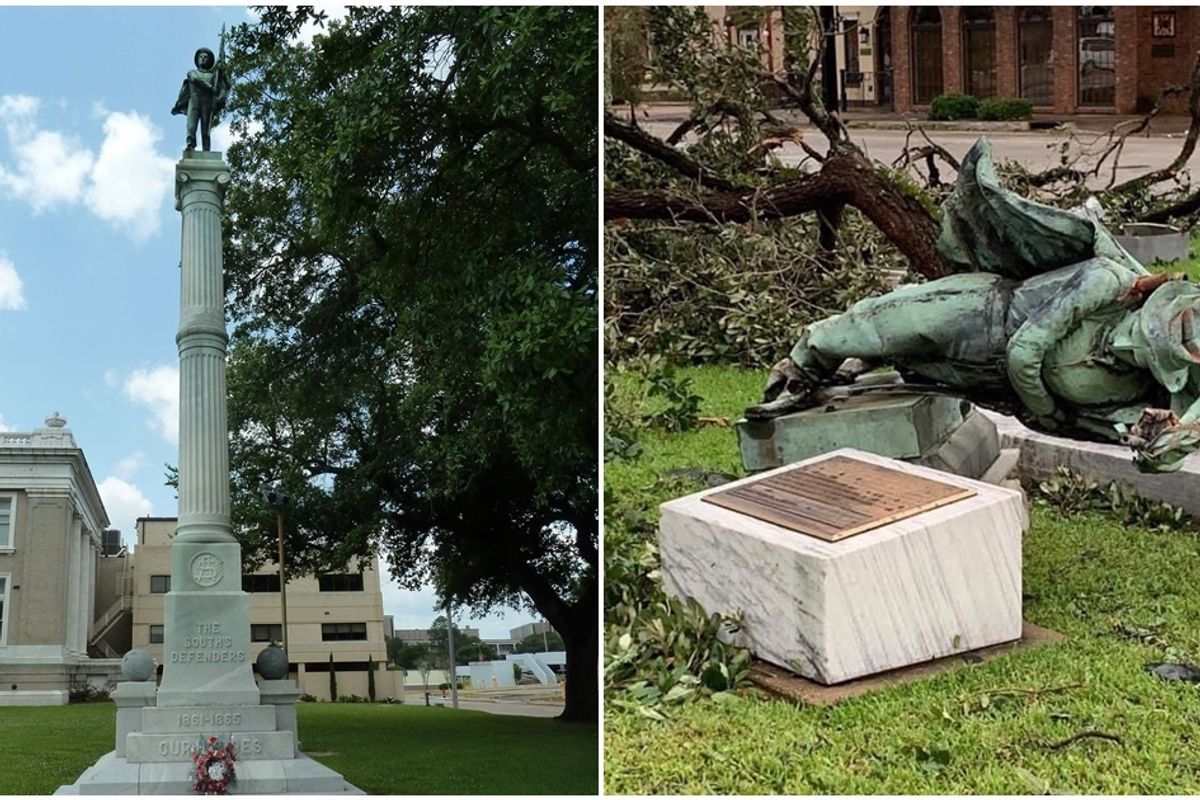 The South's Defenders monument in Downtown Lake Charles, Louisiana has been a bone of contention for locals. The statue was first erected in 1915 to recognize local residents and those throughout the south who fought for the Confederacy.


After George Floyd was murdered in March, there were renewed calls to remove the statue. His death inspired many to reconsider Confederate monuments and at least 59 have been removed in recent months.

"The people of Lake Charles and Calcasieu Parish once again voice their desire to destroy the statue and remove the memory of slavery from its literal and figurative pedestal within the community," a Change.org campaign calling for its removal read.

A special city council meeting was called in July to decide the statue's fate. Before the meeting, parish administrator Bryan Beam said he'd received 945 written responses from the community and 878 were against its removal and just 67 were in favor.

It's hard to understand why anyone would want a statue honoring a pro-slavery movement that attempted to destroy the United States of America. But the council sided with them, voting 10 to 5 to keep the statue up.


The decision didn't stop local residents' calls to tear it down.

"We're beginning a series of events predicated on making sure the monument comes down or making sure that we create as much noise until it comes down," Darius Clayton told the AP. "If they think we are done, they are sorely mistaken."

After the decision, protesters launched a boycott of businesses with ties to the council's board members.

On Thursday morning, it appears as though an act of God made the final decision on the statue. Hurricane Laura touched down at 1 am, bringing 130-mile-per hour gusts of wind – some of the strongest the region has ever seen.

The hurricane knocked down the monument at the soldier's ankles, toppling it to the ground.

The soldier now lies atop the monuments granite steps, motionless, much like his fallen brethren during the war the claimed so many American lives.

"Lake Charles and Calcasieu Parish has been filled with controversy and tension after our parish government by a vote of 10-5 refused to take down the Confederate South's Defenders Monument," Davante Lewis, director of public affairs at The Louisiana Budget Project, said on Twitter.


"Hurricane Laura had other plans and brought it down herself."

"My dad sent me some pics of the South's Defenders monument in Downtown Lake Charles post-Laura and... I think some people may be happy about this," Twitter user Andrew Beam said.

There's no word on whether the statue will be fixed and put back on its pedestal. But let's hope the residents and city council of Lake Charles and Calcasieu Parish see the significance of the statue's toppling and leave it, as well as the rest of what the Confederacy stood for, in the past.

Plus, in the aftermath of a hurricane, the town should focus on efforts to rebuild the entire community instead of ripping it apart.