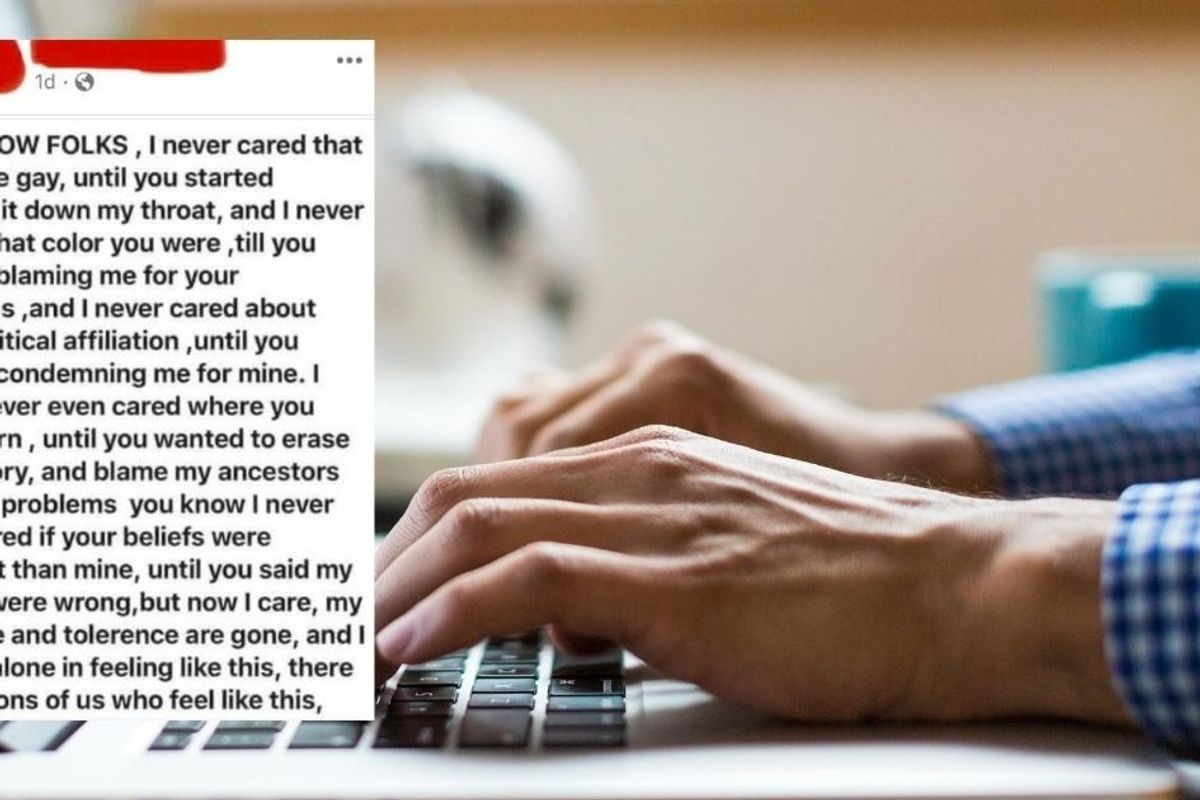 The U.S. has long engaged in discussions and debates over civil rights and social justice—issues that certainly don't seem like they should be controversial, but somehow turn out to be. In an ideal world, no one would ever have to fight for their rights or beg for equal justice, but we've never lived in an ideal world. And while much of the work that needs to be done to get there lies at the level of systems and institutions, those systems and institutions are run and upheld by people. So by extension, people's individual beliefs and attitudes matter.

The screenshot was shared along with a response that the poster called "as devastating a response as they come." It reads:

"'I never cared that you were gay, I just supported laws making it a felony for you to have sex with the partner of your choices, preventing you from marrying who you love, stopping you from adopting children, and saying it was okay to fire you for being gay. ESPECIALLY if you're in the military, where I wanted firing you to be a requirement.'

'I never cared what color you were, I just made excuses for discrimination against you in hiring and law enforcement and fetishized a movement that fought and lost a war to keep you from being treated as human beings with actual rights.'

'I never cared about your political affiliation as long as you shut up about it and let mine have total control of the government.'

'I never cared about your beliefs as long as you let me use the government to impose mine.'

'And when I say all my patience and tolerance are gone, I mean I never had any in the first place.'

Fixed it for you."

The most interesting thing about the initial post is the sense of victimization coming from the original poster. It seems to say that having to pay attention to issues of justice and civil rights and being asked to acknowledge the ongoing impact of historical oppression and what role each of us might play in keeping others down somehow takes something away from them.

Being asked to see and care about victims of injustice doesn't make you a victim yourself. The logic there is so strange. And what does it mean to shove being gay down someone's throat? Because of course it would be reasonable to push back against someone actually cramming something down your throat, but the in this context "shove it down my throat" usually means "did something publicly in my line of vision." Not the same thing.

As a few commenters explained:

"The trouble is that the top phrases are all dog whistles. For example, 'shoving (being gay) down one's throat' is simply another term for being gay in a public space. This can range from being openly gay, mentioning your boyfriend to a coworker, etc to calling yourself a sparkle fairy or whatever. It's not just the literal definition of what they say, but how these terms are used in real life."

"I spend so much time surrounded by straight guys who talk about nothing except women's bodies and sex, but my pride flag bumper sticker is apparently throwing my sexuality in people's throats."

"Ok, so I am a lesbian, in the relationship with the woman who is now my wife and the mother of my children for the last almost 2 decades (for reference that I really do have a ton of experience), and from personal experience when people say 'don't cram it down my throat' they mean 'stay in the closet'. When I talk about my relationship at work, it is 'cramming things down their throat'. When I hold her hand in public, same deal. When the laws about marriage were discussed, it was 'cramming down their throats', when health insurance was being discussed - the same, same again when adoption was discussed. As soon as being a lesbian was equal to being not lesbian, all of a sudden I appear to have stopped 'cramming' anything anywhere."

Another commenter summed up the gist of the initial post in one sentence.

"I never cared about other people being different because society used to make it easy to pretend they didn't exist."

The thing is, the complaints in the original post are not actual complaints. People being gay in public isn't cramming it down people's throats. People pointing out all of the insidious ways ingrained white supremacy works is not blaming an individual for their problems. Pointing out that someone's political views or affiliation are doing real harm to real people could be seen as condemnation, but shouldn't things that harm people be condemned? And as for erasing history, that's a hard no. No one is erasing history, because 1) that's literally not possible and 2) a good portion of our history has been "erased" through omission or dishonesty, such as school textbooks referring to enslaved people as "workers." All that's being asked if for history to be taught accurately and for the heinous parts of our history not to be celebrated with monuments to it. And as for patience and tolerance, the irony of a person who clearly doesn't fit into the marginalized categories of people they are addressing saying they've lost both simply because they're being asked to actually care about the ways people have been and still are experiencing injustice is quite rich.

From Your Site Articles
Related Articles Around the Web
social justice