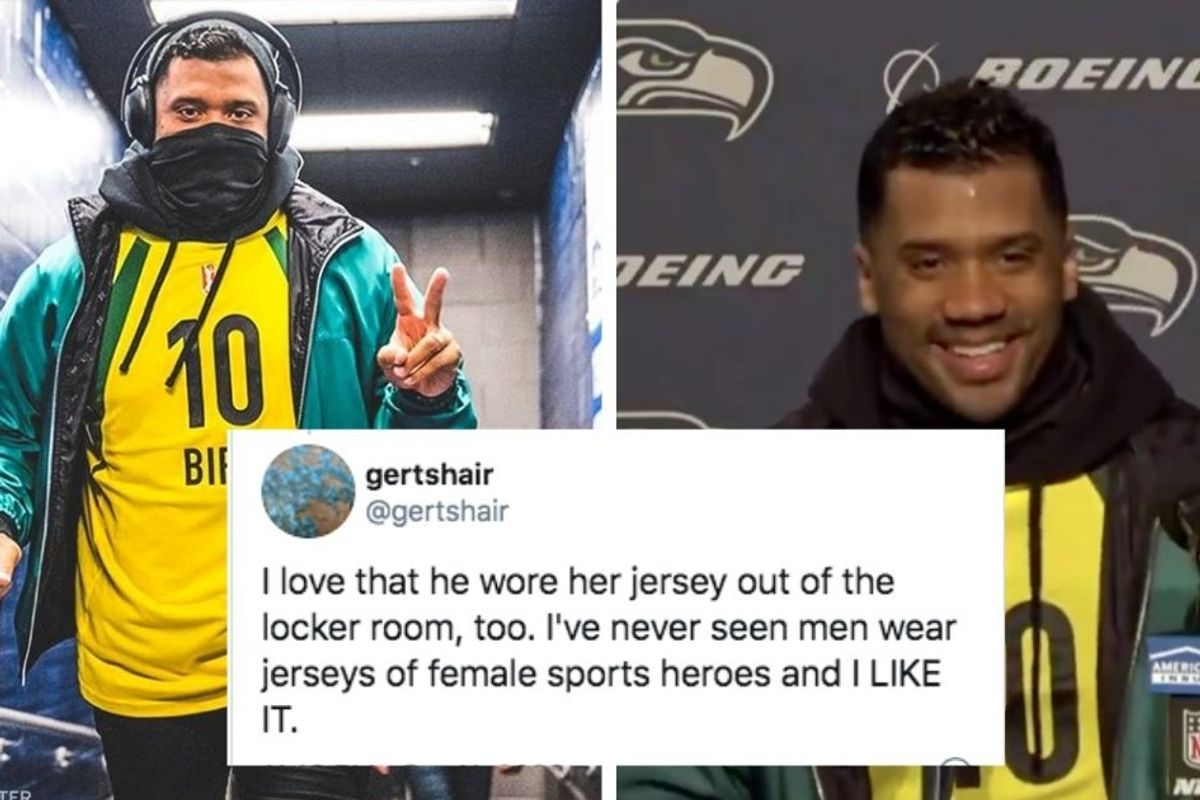 It's not every day that you see an NFL player sporting a jersey of a professional female athlete. In fact, if most of us wrack our brains, we probably can't think of any day that we've seen that.

So when Russell Wilson, quarterback for the Seattle Seahawks, walked out of the locker room after last night's last-minute win against the Minnesota Vikings, people took notice of his shirt—a yellow and green jersey with the name and number of Sue Bird, the Seattle Storm WNBA superstar player. The Storm just took home their fourth WNBA National Championship title.

But that wasn't all he did.

In the post-game press conference, a reporter asked him how he felt on the last drive in which he led the team on a 94-yard drive in the final two minutes of the game, ultimately completing a pass to the end zone on 4th and 10 to win the game. "What's going through your head?" the reporter asked.

Wilson smiled, chuckled, and said, "I feel like Sue Bird in the clutch, you know?"

It was a simple sentence, but a meaningful one.

Paola Boivin, who was a sports writer for the Arizona Republic for 20 years and the first female journalist ever inducted into the Arizona Sports Hall of Fame, shared what the moment meant to her on Twitter.

"Seahawks quarterback Russell Wilson just said, 'I feel like Sue Bird in the clutch.' In my era following sports growing up, I never remember a male athlete saying something like this. It seems simplistic, but this is powerful."

In many fields, including professional sports, girls and women had to have male role models prior to doors being opened for women to excel on the public stage. Then, once women went through those doors and made a name for themselves, women had female role models to look up to. But it's been rare to see it go the other way—to see boys or men express personal admiration for a female excelling in her field. And especially in a professional sport like football, which is pretty much entirely male, to have a star like Russell Wilson point to a female athlete as an example of the excellence he aspired to is, indeed, noteworthy at this stage of the game.

Someday, it won't be. Excellence knows no gender, and it's only outdated thinking and outdated ideas of manhood and masculinity that keep people locked in boxes of who our role models can be and how our fandom can be expressed. Russell Wilson is clearly a fan of Sue Bird, as is any Seattle resident who pays any attention to sports whatsoever. But he also clearly sees her as an athletic role model, and it's just awesome to see him express that so openly.

Wilson's sister plays basketball at Stanford, and he has been an outspoken supporter of women's sports in general. Here's a video of him from February sharing his and his wife Ciara's support on National Girls and Women in Sports Day.

Love to see it. The more we all support one another, the better the chances that all of us will excel. Thanks for setting the example, Russell Wilson.