See these amazing photos as Death Valley prepares for a superbloom. 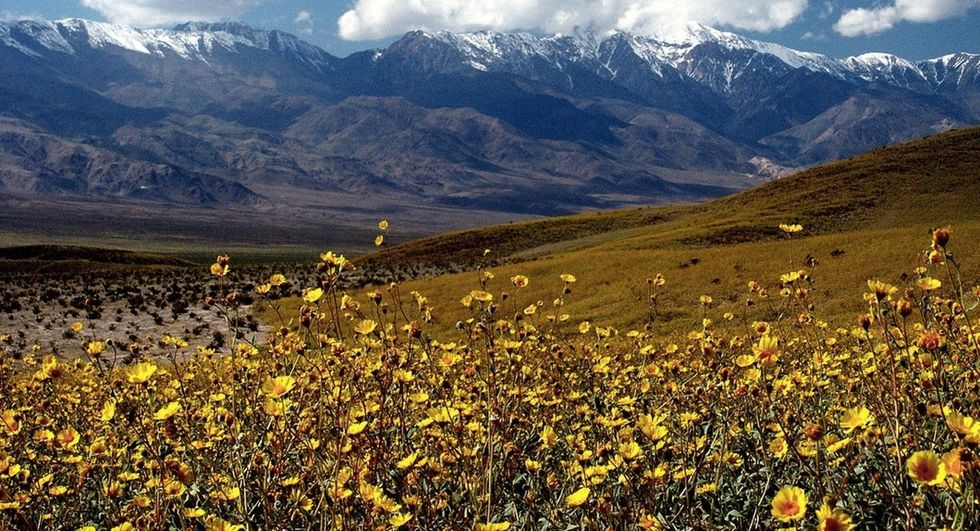 This is Death Valley.

(If looks like something out of "Star Wars," that's because it totally is).

The name alone is enough to make you thirsty.

Death Valley is a basin in the Californian desert just west of the Nevada border. It is the driest, hottest place in North America. The temperature once reached a reported 134 degrees Fahrenheit!

If Death Valley is so "dead" ... what the heck are all these flowers doing there?!

The #superbloom of wild flowers in #deathvalley. Quite a site from the normal dry-as-a-bone landscape so typical for the area.
A photo posted by Peter Gaunt (@petergaunt) on Feb 1, 2016 at 8:42am PST

SUPERBLOOM!!!!!! #deathvalley #superbloom #wildflowers #desert #california
A photo posted by The Muir Project (@themuirproject) on Feb 14, 2016 at 10:59am PST

The animals and plants that live in Death Valley have adapted to survive the long, dry, hot conditions.

Death Valley receives, on average, just over 2 inches of rain a year, so every drop is precious. Some animals and plants that live there are great at conserving water. Other animals — like the roadrunner — get their water from eating other plants and animals. And others just hunker down and try to wait it out.

When it does rain in Death Valley, the valley is less like the surface of Tatooine and a lot more like something out of "The Wizard of Oz."

This year's rainfall may be super special, causing a "superbloom" to form.

"You always get flowers somewhere in Death Valley almost every month of the year," says park ranger Alan Van Valkenburg in a YouTube video from the Death Valley National Park, "but to have a big bloom like this, which we hope will become a superbloom — which is beyond all your expectations — those are quiet rare. Maybe once a decade or so."

A superbloom only happens when the conditions are just right: the perfect amount of rain in the winter and spring, the sun's warmth being just right, and no hot, desiccating wind to suck the moisture away. And it looks like it might just happen in 2016.

"You have to have just the perfect conditions. You never know when it's going to happen," Van Valkenburg says. "It's a privilege to be here and get to see one of these blooms. Very few people get to see it, and it's incredible."

"It's not a permanent thing; it's just temporary," Van Valkenburg says. "It's here for a moment, then it fades."

If you're thinking of visiting, catching a glimpse of the superbloom isn't really the kind of thing you can put off. Soon enough, the water will be used up. The plants will shed their seeds and wait for the next rainfall. And the land will return to sweeping vistas of dusty rock and the distant, lonesome calls of desert creatures biding their time until the next superbloom of life.