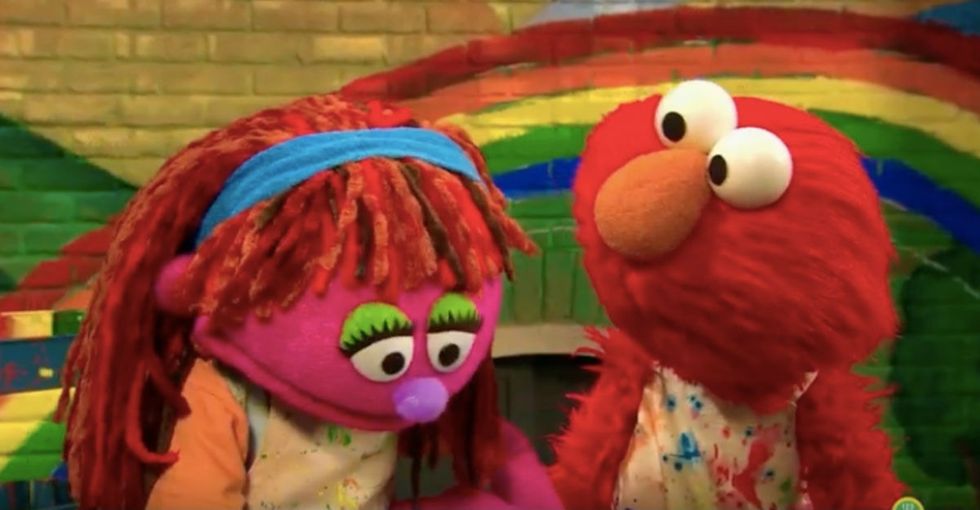 I credit much of my early childhood education to Sesame Street programming. Four decades ago, the show helped me learn not just letters and numbers, but real-life social and emotional skills as well. I watched Bert and Ernie work through friend squabbles and Kermit and Cookie Monster talk about different kinds of feelings. I remember Buffy St. Marie breastfeeding her baby and telling Big Bird matter-of-factly what she was doing.

When Mr. Hooper died, I was old enough to see how well the show handled the topic of death and all of the questions and feelings that went along with it. Sesame Street didn't shy away from hard topics, and generations of kids have benefited from the creators' and collaborators' respect for children's capacities.

As a character brought on to help kids understand food insecurity, Lily is back to take on homelessness.

Lily arrived on the Sesame Street scene sharing how her family sometimes visits the food pantry. Now she will be sharing that her family sometimes doesn't have a home to live in. According to the New York Times, the storyline will include Lily's family alternating between sleeping in shelters, bunking with relatives, and staying with Sofia, a person who works at the local community center.

The show won't actually use the word "homeless," as there's a negative stigma surrounding that term. Instead, the letter H will represent hope, help, healing, and home. In the first segment released on Youtube, Sofia tells Lily that her namesake's flower is a symbol of hope. She also reassures her that home is more than a house or an apartment—it's "where the love is."

In New York City, one out of every 10 school-aged kids experienced homelessness last year.

Despite an economy that is thriving by many measures, some people in the most expensive U.S. cities still face economic hardship. Housing costs in some markets have pushed people out of house and home, literally. And some—too many—of those people are children.

New York City, where Sesame Street is set, saw its third consecutive year with more than 100,000 students living in temporary housing during the school year—the largest number since record-keeping began. And nationwide, 2.5 million children face homelessness. That's one out of 30 kids—an appalling number in the world's largest economy.

Storylines and characters like Lily give kids with struggling families a voice, in addition to fostering empathy in kids who may not be aware of this issue. Kudos to Sesame Street for continuing to lead the way helping children learn about tough topics.

Check out the first segment here: