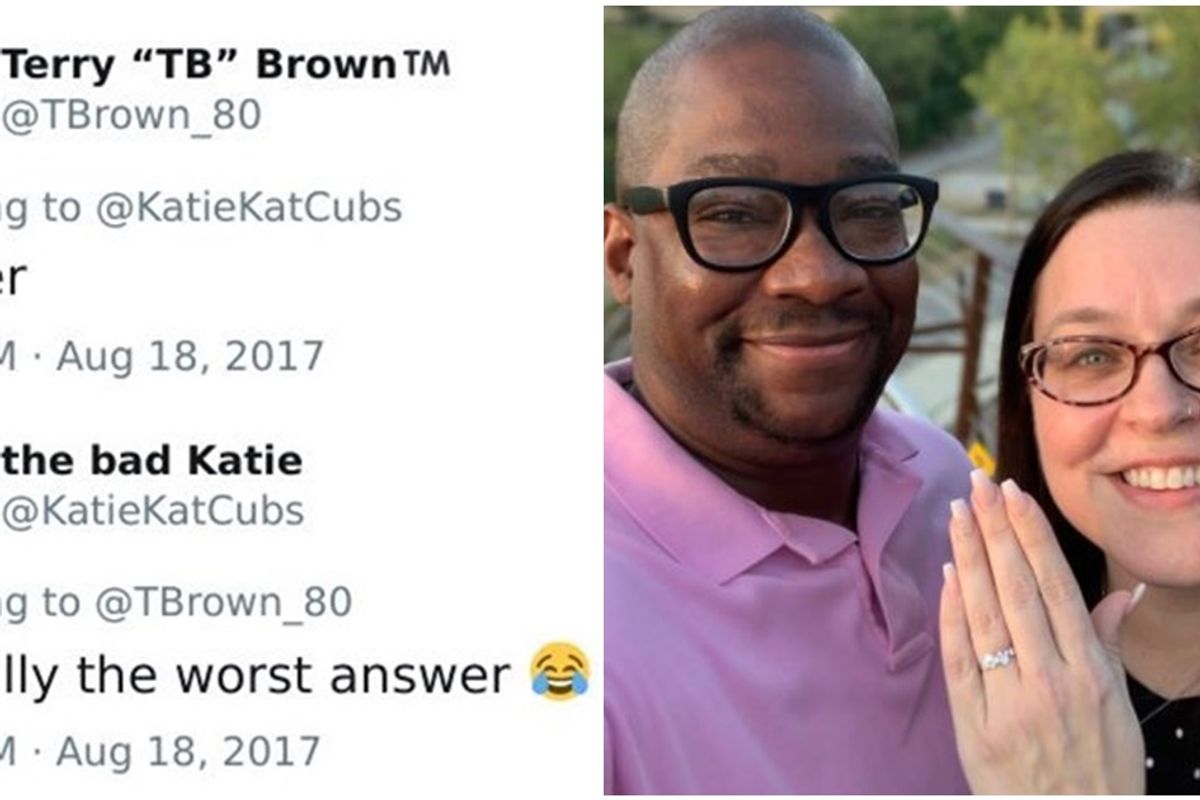 Our story begins three years ago when a gal named Katie living in Iowa posted some terrible advice she received from her married coworkers about where to find single men.

Terry Brown of Kentucky had recently started following Katie on Twitter because he thought she was "cute" and saw her tweet "as an opening." He boldly, and in the opinion of many, incorrectly, suggested that Twitter was a good place for Katie to meet single men.

Terry responded with a funny list of more places that would be terrible for Katie to meet a single man.

Katie agreed but thought Terry was still egregiously wrong with his initial assumption.

The conversation turned to how Katie can find a relationship like women do in Hallmark channel movies or romantic comedies.

At that point, Terry made his move by taking things to the next level on Twitter and sending her a private, direct message.

"I slid into the DMs (as the kids say) as we were going back and forth and the timeline," Terry told Welcometoterranova. "And we just kept messaging each other, eventually exchanging phone numbers."

The new friends talked for a while through Facetime and text message before Terry took the big drive from Kentucky to Iowa for the first in-person meeting. "It was amazing," Terry said of their first date. "I pretty much knew she was The One after that first meeting."

After dating for three years, Terry planned on proposing to Katie at the Chicago Cubs home opener in April, but those plans got squashed by COVID-19. So he settled for a more "subdued" proposal in Iowa.

"Since we were Twitter folks, I knew I had to post something," Terry told Welcometoterranova. "The initial 'She said YES!' tweet got about 1500 likes, but the SpongeBob meme tweet is at over 560K likes. It's been surreal, to say the least."

While the story of how a couple found love on Twitter is heartwarming, there's a lot of people out there that want to know Terry's technique for picking up his future wife on the platform.

You gotta have some serious Twitter game to pull off this impossible move.

"Twitter is a tool, just like anything else," he shared. "It's how you use it. I think that if you're interacting with someone, you can get a pretty good idea of who they are. If you look at our interactions on the timeline, there's nothing that would be considered flirty, but I just knew."

"Always, always be respectful," he says.

For Terry, meeting Katie was a reminder that you never know what lies around the corner or in your DMs.

"I was married for 13 years, got divorced and was in a dark place," he admits. "My advice to folks is to not get too down. Literally, you just never know where you'll find your person!"

There are few things as frightening to a parent than losing your child in a crowded place like a shopping mall, zoo, or stadium. The moment you realize your child is missing, it's impossible not to consider the terrifying idea they may have been kidnapped.

A woman in New Zealand recently lost her son in a Kmart but was able to locate him because of a potentially life-saving parenting hack she saw on TikTok a few months ago.

The woman was shopping at the retailer when she realized her two-year-old son Nathan was missing. She immediately told a friend to alert the staff to ensure he didn't leave through the store's front exit.