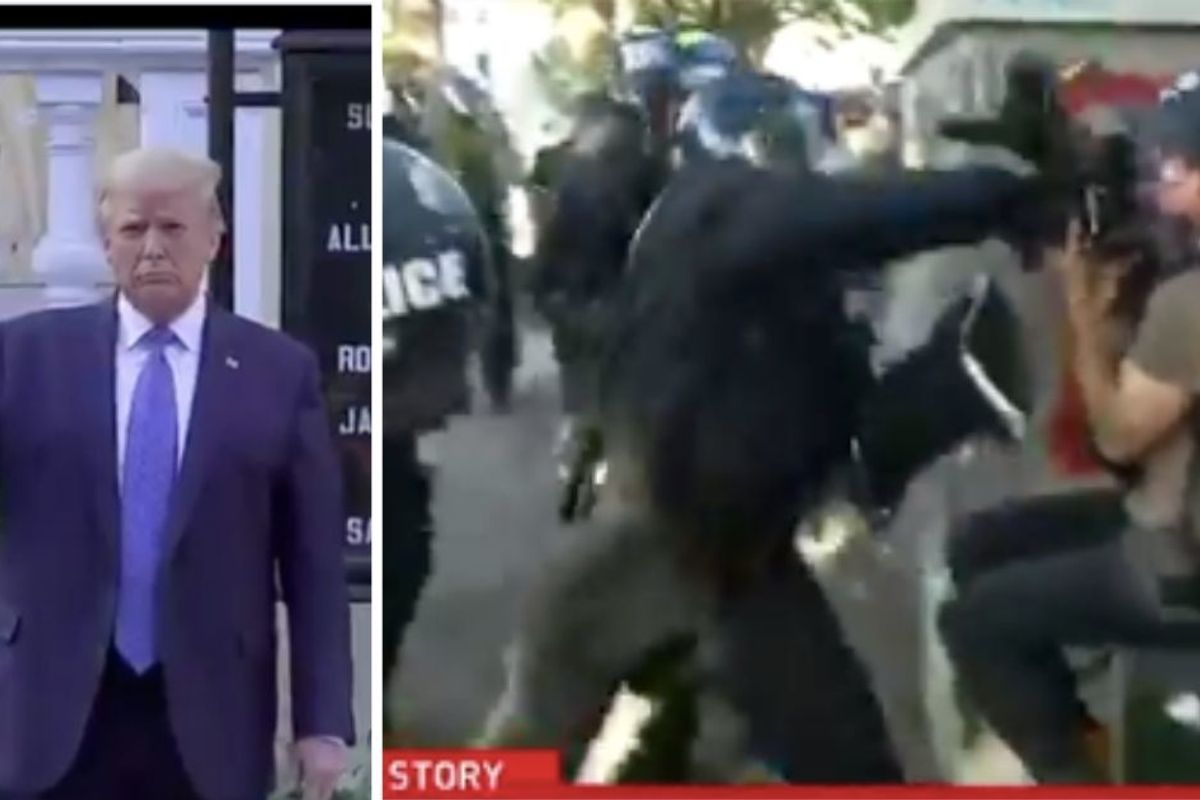 Yesterday evening, just after delivering an address to the nation, President Trump walked across the White House lawn, across Pennsylvania Avenue, and up to St. John's Church, Lafayette Square. Why? To have his picture taken with a Bible.

Not to pray. Not to share any faith-based thoughts. Just the photo op.

That's the simple story, which is silly on its face. But the backdrop makes it all the more surreal.

The president's address just prior included a threat to deploy the military to control rioting, which has taken place in or after some of the nation's protests over police brutality and racial injustice. In his speech, he said he was "an ally of all peaceful protesters."

But in order for the president to take his Bible-holding photos, a large group of peaceful protesters legally assembled near the White House were forced back by police and the National Guard, using tear gas. According to ABC News, some people were beaten with batons and shields, including at least one news photographer. Watch the incident here:

The disconnect between the president's words and what was happening outside the White House gates while he said them is stunning.

Equally stunning is the fact that the church didn't even know he was coming. Gina Gerbasi, a rector at St. Johns, was working in the patio area of the church square to offer water and aid to protesters when she was blindsided by the violent dispersing of the crowd. She wrote on Facebook:

"Friends, I am ok, but I am, frankly shaken. I was at St. John's, Lafayette Square most of the afternoon, with fellow clergy and laypeople - and clergy from some other denominations too. We were passing out water and snacks, and helping the patio area at St. John's, Lafayette square to be a place of respite and peace. All was well - with a few little tense moments - until about 6:15 or so. By then, I had connected with the Black Lives Matter medic team, which was headed by an EMT. Those people were AMAZING. They had been on the patio all day, and thankfully had not had to use much of the eyewash they had made. Around 6:15 or 6:30, the police started really pushing protestors off of H Street (the street between the church and Lafayette Park, and ultimately, the White House. They started using tear gas and folks were running at us for eyewashes or water or wet paper towels. At this point, Julia, one of our seminarians for next year (who is a trauma nurse) and I looked at each other in disbelief. I was coughing, her eyes were watering, and we were trying to help people as the police - in full riot gear - drove people toward us. Julia and her classmates left and I stayed with the BLM folks trying to help people. Suddenly, around 6:30, there was more tear gas, more concussion grenades, and I think I saw someone hit by a rubber bullet - he was grasping his stomach and there was a mark on his shirt. The police in their riot gear were literally walking onto the St. John's, Lafayette Square patio with these metal shields, pushing people off the patio and driving them back. People were running at us as the police advanced toward us from the other side of the patio. We had to try to pick up what we could. The BLM medic folks were obviously well practiced. They picked up boxes and ran. I was so stunned I only got a few water bottles and my spray bottle of eyewash. We were literally DRIVEN OFF of the St. John's, Lafayette Square patio with tear gas and concussion grenades and police in full riot gear. We were pushed back 20 feet, and then eventually - with SO MANY concussion grenades - back to K street. By the time I got back to my car, around 7, I was getting texts from people saying that Trump was outside of St. John's, Lafayette Square. I literally COULD NOT believe it. WE WERE DRIVEN OFF OF THE PATIO AT ST. JOHN'S - a place of peace and respite and medical care throughout the day - SO THAT MAN COULD HAVE A PHOTO OPPORTUNITY IN FRONT OF THE CHURCH!!! PEOPLE WERE HURT SO THAT HE COULD POSE IN FRONT OF THE CHURCH WITH A BIBLE! HE WOULD HAVE HAD TO STEP OVER THE MEDICAL SUPPLIES WE LEFT BEHIND BECAUSE WE WERE BEING TEAR GASSED!!!!

I am deeply shaken. I did not see any protestors throw anything until the tear gas and concussion grenades started, and then it was mostly water bottles. I am shaken, not so much by the taste of tear gas and the bit of a cough I still have, but by the fact that that show of force was for a PHOTO OPPORTUNITY. The patio of St. John's, Lafayette square had been HOLY GROUND today. A place of respite and laughter and water and granola bars and fruit snacks. But that man turned it into a BATTLE GROUND first, and a cheap political stunt second. I am DEEPLY OFFENDED on behalf of every protestor, every Christian, the people of St. John's, Lafayette square, every decent person there, and the BLM medics who stayed with just a single box of supplies and a backpack, even when I got too scared and had to leave. I am ok. But I am now a force to be reckoned with."

In addition, St. John's Church, Lafayette Square posted a statement on social media stating that they were "shocked" by the president's visit and "even more appalled at the violent clearing of Lafayette Square to make the visit possible."

The bishop of the Episcopal Diocese of Washington also issued a statement condemning what took place on and around church grounds, saying that the president's message was "antithetical to the teachings of Jesus and everything our church stand for" and that she was "outraged." She pointed out that the president did not pray when he came to the church, nor did he acknowledge "the agony and sacred worth of people of color in our nation who rightfully demand an end to 400 years of systemic racism and white supremacy in our country."

Speaking on behalf of the Diocese, she added, "In no way do we support the President's incendiary response to a wounded, grieving nation."

Powerful words from leadership of the church President Trump chose to use for optics.

From Your Site Articles
racism