Stray dog kept visiting car dealership. So, they gave him a job and his own employee badge. 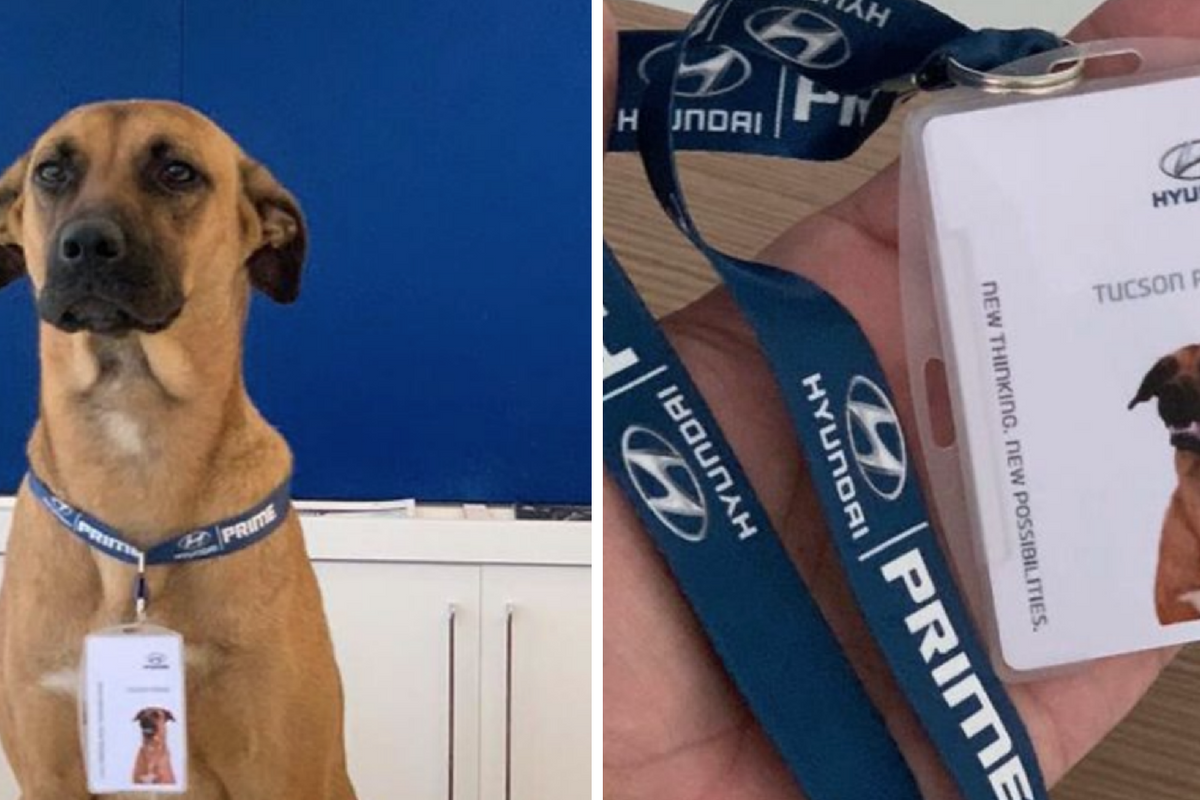 I know some people use the term "work like a dog" to describe the effort they have put forth. Perhaps out of respect they should be more careful with their words. Some dogs do not stop until they reach the top. Meet Tuscan Prime: canine, and Hyundai Prime's newest employee, as in badge and everything (although it is still unclear whether he has filled out the equivalent of a W-4 form).

According to Bored Panda, it all started when the employees of the Brazilian car dealership took notice of a stray dog spending some time around the building. At first everyone thought he was just passing through, but the pup soon to be known as Tuscan Prime had other ideas. On one fateful rainy night, showroom manager Emerson Mariano ushered the poor guy in from the wet conditions and offered him food, water and shelter. The bond between the two was instantaneous. It was then that Mariano had the idea to make him their mascot.

"After all, the company has always been pet friendly, so now, we decided to embrace this idea in practice too, having our own pet precisely at a more complicated time like this with so many abandoned animals," he said. They named him Tuscan Prime. The fact that his name sounds like a Transformer might not be coincidence, because he was clearly ready to turn into something else.

Upon given the title of mascot, Tuscan immediately seized the opportunity to show them how much more he could be. He took the initiative to start greeting customers with his warm and charming character. You can almost hear him saying, "Listen Emerson, I appreciate the opportunity, and all. But limiting me to just being a mascot is like driving Ferrari in a school zone. If you guys need to get people into your dealership, I am the George Clooney of greeters. Put me in, coach."

It was not long before Mariano made him the official greeter, complete with an employee badge. Tuscan's customer service has not just had an incredibly positive effect on the customers, but his charm has greatly improved the workplace atmosphere, as well. According to Mariano, the dogs "very caring and docile nature" has improved the environment of the entire organization.

At this point, I am sure that everyone is thinking Tuscan's rise from being a stray to mascot to greeter puts a nice bow on the story. Not for this dog. His drive has put him in a position where he is expected to star in a national marketing campaign for Hyundai. Perhaps he is thinking, "Maybe you guys should go home and watch The Pursuit of Happyness with Will Smith, because if you think I am done, you are mistaken. I am just getting warmed up."

Tuscan went from being homeless to starring in a national add for a major car company. It is important to note that he did this without speaking a human language, no opposable thumbs and a life expectancy about seven times shorter than ours. We go to school for six hours a day for almost 20 years or more, and this is for human stuff. Tuscan rose through the ranks with none of those advantages. This inspires me to put my nose to the grindstone and step up my game. I am going to get to work—like a dog.