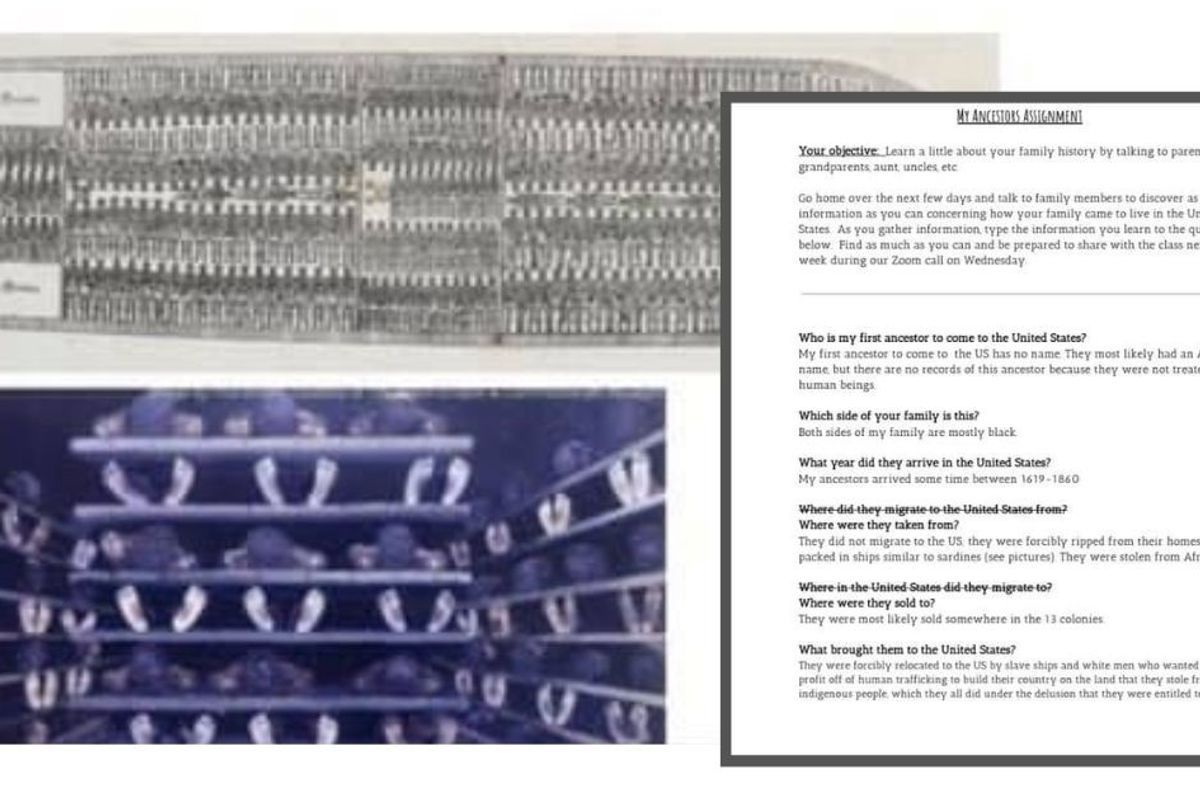 The top of the assignment reads:

"Your objective: Learn a little about your family history by talking to parents, grandparents, aunt, uncles, etc. Go home over the next few days and talk to family members to discover as much information as you can concerning how your family came to live in the United States. As you gather information, type the information you learn to the questions below. Find as much as you can and be prepared to share with the class next week during our Zoom call on Wednesday."

The image shows the questions the teacher asked in bold, with the students' answers underneath them. Two of the questions were crossed out by the student and reworded to fit her ancestors' reality. It reads:

"Who is my first ancestor to come to the United States?

My first ancestor to come to the US has no name. They most likely had an African name, but there are no records of this ancestor because they were not treated as human beings.

Which side of your family is this?

Both sides of my family are mostly black.

Where were they taken from?

They did not migrate to the US, they were forcibly ripped from their homes and packed in ships similar to sardines (see pictures). They were stolen from Africa.

Where were they sold to?

They were most likely sold somewhere in the 13 colonies.

What brought them to the United States?

They were forcibly relocated to the US by slave ships and white men who wanted to profit off of human trafficking to build their country on the land that they stole from the indigenous people, which they all did under the delusion that they were entitled to do so."

The assignment assumes the dominant cultural narrative in the U.S.—that we are a nation of immigrants and that our ancestors at some point along the line left a faraway homeland in search of a better life and found it here. But that narrative completely erases the experiences of the millions of descendants of enslaved Africans, in addition to the descendants of Native Americans whose ancestors have lived here for thousands of years.

This 15-year-old succinctly and boldly showed that, intentional or not, this assignment was designed only with non-Black and non-Native students in mind.

Bullock-Jones shared an update with the email that the student sent to the teacher with her assignment as well as his response.

Today is the day the students were scheduled to present their homework assignments to the other classmates via Zoom. The teacher postponed the presentation. My guess? I suspect he may have caught wind of her completed assignment making the rounds to thousands of people here in the US as well as abroad.
Before Female Offspring submitted her work to him, she sent an email directly to the teacher. It is below:

Dear ____ Good afternoon. I am unsure of whether or not it came to mind when creating this assignment that not all students come from a line of descendants whose history involves voluntary immigration. As an African American, my family history involves somber deep rooted wounds involving enslavement and exploitation which (as you know) continues to constantly weigh heavily on our shoulders. I want to make it clear that I understand that history is not always pretty and in this class we will learn and gain a deeper understanding of tragic historical events. The topic of this assignment it not something I take lightly. I am telling you all of this in the hopes that in the future you might give assignments like this more thought before asking these types of things of your future students.

Monday, the Female Offspring had office hours with the teacher. He was apologetic, conciliatory and complimentary of the assignment she turned in. He told her that it was insensitive of him to put her in that position. He said that he would need to re-evaluate the assignment, after having assigned it to his students for many years. He complimented her on how she had chosen to answer and re-frame his questions. Finally, he told her that it was the BEST response to the assignment that he had ever received and he's been teaching for more than 15 years. I assume that when he said her response was the best he'd ever received, that means that she'll be getting an A.

Right on, Female Offspring! Keep up the good fight!"

Indeed, keep up the good fight. We all need to learn to look outside our assumptions, challenge the dominant cultural narrative when it erases other Americans, and courageously speak the truth. Kudos to this student, and good for her teacher for hearing her, acknowledging the impact of the assignment, and committing to reevaluate it. (And also for giving her an A—she certainly earned it.)

From Your Site Articles
Related Articles Around the Web
racial justice