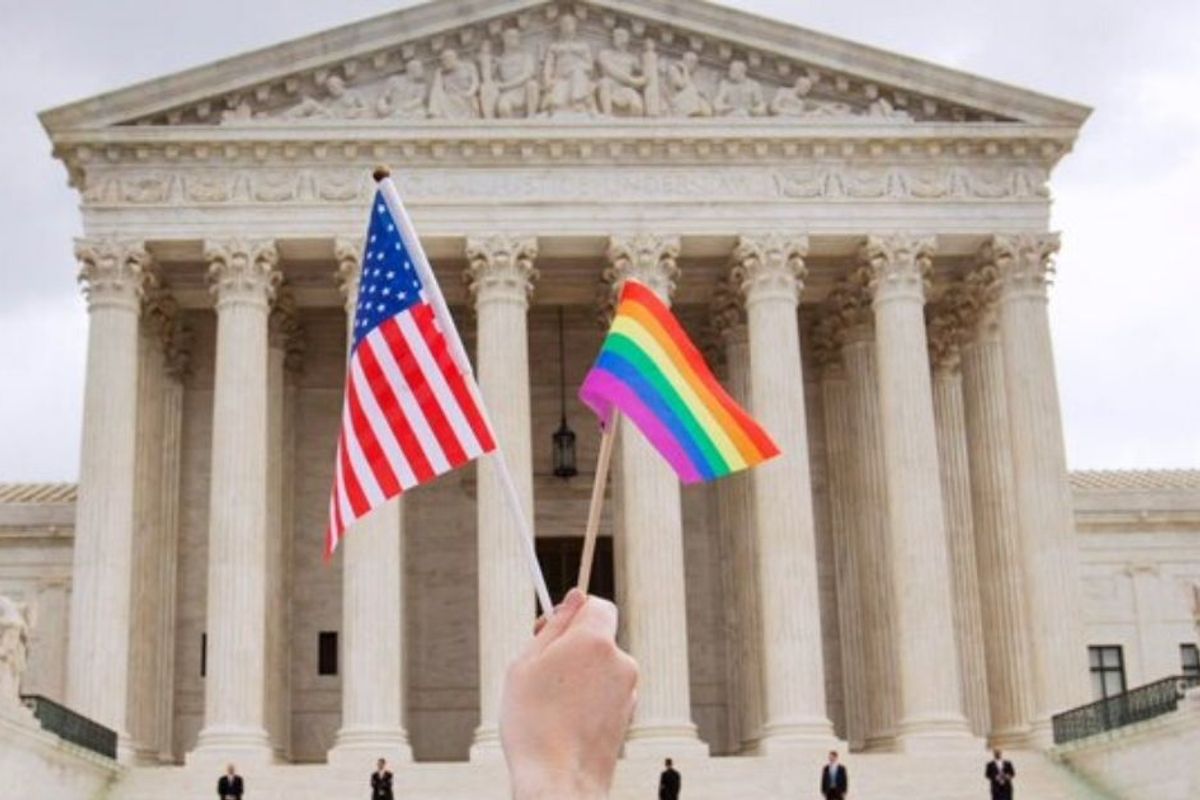 This morning, the U.S. Supreme Court issued a historic ruling that protects LGBTQ+ people from workplace discrimination. In the 6-3 ruling, two conservative-leaning justices, Neil Gorsuch and John Roberts, joined the four liberal-leaning judges in the decision. Gorsuch himself wrote the Supreme Court opinion.

The courts are supposed to be objective, so labeling justices as "conservative" and "liberal" always feels a bit reductive. But we live in a highly partisan era and it would be naive to ignore the politicized underpinnings of judicial appointments—especially in high-profile cases like this one, with a 5-4 split along conservative/liberal lines, which wouldn't have been surprising.

So how did these two conservative judges end up ruling in favor of the LGBTQ+ community, which is generally viewed as a liberal stance?

In a nutshell, they didn't. Not explicitly anyway.

The basis of the ruling isn't actually about legal protection based on sexual orientation or gender identity itself. In the opinion, Gorsuch explains that Title VII of the Civil Rights Act of 1964 prohibits workplace discrimination based on "race, color, religion, sex, [and] national origin." What the court determined was that the "sex" part of the law is what LGBTQ+ workplace discrimination cases really boils down to.

The entire opinion includes specific precedents and arguments against dissents issued by the other conservative justices, but the gist of the ruling is summed up in these two paragraphs:

That distinguishes these cases from countless others where Title VII has nothing to say. Take an employer who fires a female employee for tardiness or incompetence or simply supporting the wrong sports team. Assuming the employer would not have tolerated the same trait in a man, Title VII stands silent. But unlike any of these other traits or actions, homosexuality and transgender status are inextricably bound up with sex. Not because homosexuality or transgender status are related to sex in some vague sense or because discrimination on these bases has some disparate impact on one sex or another, but because to discriminate on these grounds requires an employer to intentionally treat individual employees differently because of their sex."

What's interesting about basing the ruling on sex discrimination—aside from the fact that it makes perfect sense within the letter of the law—is that it serves as a loophole, which these conservative justices are able to rule in favor of LGBTQ+ protection under the law without explicitly defending anyone's sexual orientation or gender identity. In other words, they don't have to voice support for the LGBTQ+ community anywhere in this opinion—the law regarding sex discrimination covers it.

Gorsuch summed up the opinion as such:

"Ours is a society of written laws. Judges are not free to overlook plain statutory commands on the strength of nothing more than suppositions about intentions or guesswork about expectations. In Title VII, Congress adopted broad language making it illegal for an employer to rely on an employee's sex when deciding to fire that employee. We do not hesitate to recognize today a necessary consequence of that legislative choice: An employer who fires an individual merely for being gay or transgender defies the law."

What's striking about this ruling is that it means these protections have already been in place for the past 56 years. In some ways, that makes the ruling more powerful than if new legislation had been passed adding specific language regarding sexual orientation and gender identity. On one hand, it sort of allows the court to skirt around the question of specific protections for LGBTQ+ people. On the other, it essentially reaches an arm around the LGBTQ+ community and sweeps them into the broad protections already guaranteed to everyone else.

With the argument being made by a conservative justice and signed off by another, that's a huge, historic statement and a big win for LGBTQ+ workers.