Sure looks like these monkeys are domesticating wild wolves. What's the deal?

Two enemies decided to stop fighting. The results speak for themselves. 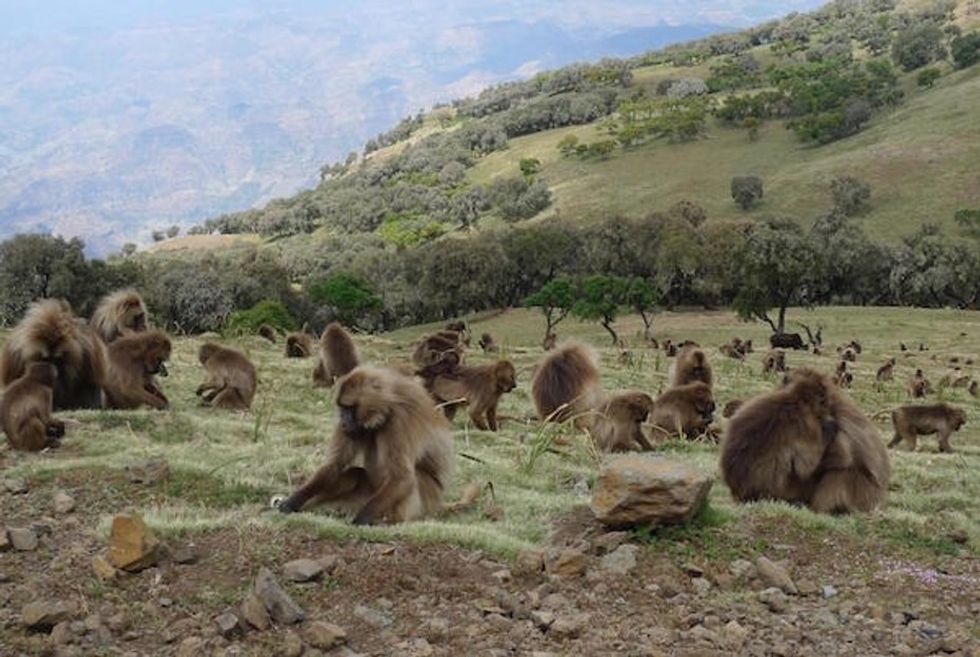 All right, we knew monkeys were smart. But this is just ridiculous.

Photos have surfaced recently of what looks like Ethiopian gelada monkeys domesticating wild wolves. Yeah — domesticating them, like dogs!

According to an article over on New Scientist, researchers have observed the monkeys and wolves mingling peacefully over the course of several years.

While most carnivores in the area are known to actively hunt the monkeys, the geladas and the wolves have kind of just been ... ignoring each other.

Researcher Claudio Sillero adds that this is probably how the relationship between humans and dogs began thousands and thousands of years ago. Canines didn't become our best friends overnight. More likely, they hung around the fringes of our encampments, ate our scraps, and were tolerated as long as they didn't try to bite anyone.

Unfortunately, despite these similarities, don't expect monkeys to be keeping "pet wolves" anytime soon (as cool as that would be).

What does it actually mean to be domesticated?

You can generally think of domestication in terms of tameness. "Domesticated" is another way of describing an animal with a loss of aggression, and though we think of it as something humans "do" to other species, it actually exists all throughout nature.

Ants, for example, are masters of domestication. Bet you didn't know that!

This ant is going to TOWN on that aphid. Photo by Image by Dawidl/Wikimedia Commons.

It's part of what makes ants one of the world's most efficient predators.

Not a lot of people know that ants have this complex relationship with aphids (those tiny green bugs, sometimes known as "plant lice"). The aphids eat plants and produce a sticky, sweet substance called honeydew that the ants love.

Sometimes, ants will straight up eat aphids to get to the good stuff, but over time, they realized they could extract the honeydew by stroking the aphids on the back (without killing them).

So, ants keep colonies of aphids nearby and on-hand for whenever they need a snack, essentially "farming" them.

The aphids, in return, get protection from predators that DO want to eat them, like birds, which the ants will swarm and drive away during an attack.

And then there's this concept of self-domestication, which happens when a species self-selects away from aggression when it's beneficial for its survival.

Bonobos, for example, have evolved to become significantly less violent than their cousins, the chimpanzees.

Rather than fight each other for dominance and compete for resources, the bonobos' docile nature means they're able to cooperate, play, and form alliances (not to mention have recreational sex!).

So far, it's unclear exactly what's going on with the wolves and the gelada monkeys over in Ethiopia.

Whether there's purposeful domestication going on at the hands of the monkeys or the wolves are self-selecting away from eating the geladas remains to be seen.

We do know that the ceasefire between the two species seems to be working out for both parties.

The wolves are about 40% more successful in their rodent hunts when the monkeys are nearby, either because the monkeys help flush the rodents out or because they act as a false signal that there aren't any predators around.

And the monkeys? Well, they at least have one less carnivore to watch out for.

As the once-celebrated Information Age devolves into the hell-hole-ish Misinformation Age, many of us feel a desperate sense of despair. It's one thing to have diverse perspectives on issues; it's entirely another to have millions of people living in an alternate reality where up is down, left is right, and a global pandemic is a global hoax put on by a powerful cabal of Satanic, baby-eating, pedophile elites.

Watching a not-insignificant portion of your country fall prey to false—and sometimes flat out bonkers—narratives is disconcerting. Watching politicians and spokespeople spout those narratives on national television is downright terrifying.

Clearly, the U.S. is not the only country with politicians who pander to conspiracy theorists for their own gain, but not every country lets them get away with it. In a now-viral interview, New Zealand's Tova O'Brien spoke with one her country's fringe political party leaders and showed journalists exactly how to handle a misinformation peddler.

Her guest was Jami-Lee Ross, leader of the Advance New Zealand party, which failed to garner enough votes in the country's general election this weekend to enter parliament. The party, which got less than one percent of the vote, had spread misinformation about the coronavirus on social media, and Ross's co-leader, Billy Te Kahika, is a known conspiracy theorist.

But O'Brien came prepared to shut down that nonsense.