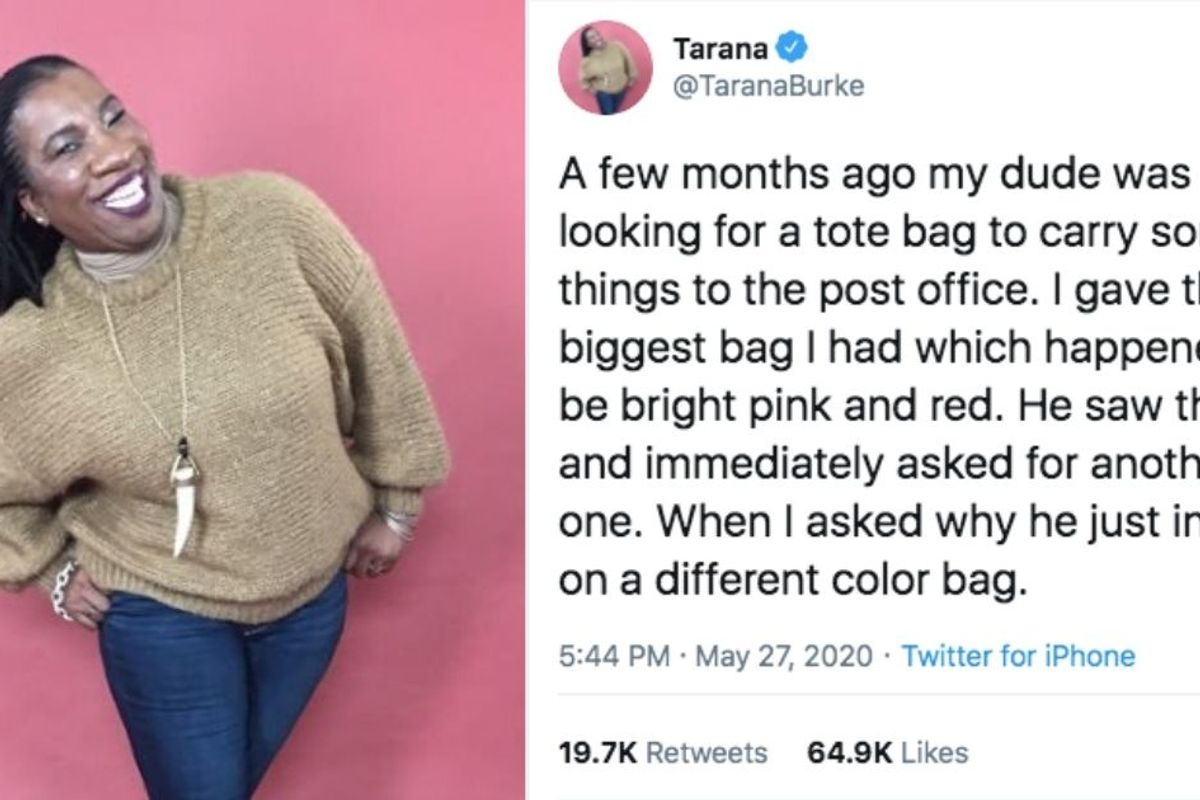 Being a black man in America comes with its own baggage—literally and figuratively.

Tarana Burke—the woman who coined the original #MeToo movement back in 2006—shared a story on Twitter that highlights one of the myriad things black men have to think about that most Americans do not.

"A few months ago my dude was looking for a tote bag to carry some things to the post office. I gave the biggest bag I had which happened to be bright pink and red. He saw the bag and immediately asked for another one. When I asked why he just insisted on a different color bag."

"His insistence annoyed me and I started in on him fussing about it being sexist and homophobic, even to reject a bag based on thinking it's too effeminate! He let me fuss at him for a minute and then finally he said 'Baby, please stop. That's not it!'

He said 'I'm a 6'3 Black man. If I'm walking down the street with a bright pink bag I could look like I stole it from a woman - which could attract police attention. I'm never trying to give these cops a reason to stop me. Ever.' Never occurred to me."

It would never occur to me, either. If my white husband were walking around carrying a big pink tote bag, no one would assume he stole a woman's purse. No one. They might giggle at him. They might think it was adorable, or even courageously feminist, for him to boldly carry a bright pink tote around. No way would there be a presumption of criminality in that image.

Burke also shared a second story that highlights the baggage of fear and careful calculation black men like her partner carry around with them. She wrote:

"A few years ago me and dude are out and come back to his car to find it vandalized. He parked by a driveway and partially blocked it and we concluded that the owners had vandalized the car. I get pissed and go knock on the door. They don't answer so I'm yelling!

He's telling me to calm down and forget it but I'm pissed! A few minutes later cop car rolls by and they stop and get out. I start to tell them what happened and they walk up on him and immediately start questioning him. I interrupt and say 'excuse me HIS car was vandalized!'"

"The cops tell me to 'be quiet' and just as I'm about to turn all the way up on them he turns to me and says 'Baby, please...' firmly. Then he calmly answers the cops questions even though they are rude and invasive. They take his license and keep asking ridiculous questions..

'What are you all doing here?'

'Did you get into an altercation earlier tonight?'

'If I knock on these people's door what are they going to say?'

I was fuming. Now I'm nervous. They eventually stop and let us go. We ride back to my house silently. He goes home."

"Later he calls and says 'Please don't do that again.' I got it. I could hear the stress in his voice. I thought about both of these stories today. A lot. I know what's it's like worrying that my child, partner, brother or other loved ones will meet an Amy Cooper or worse...

"I know my fears as a Black woman moving through the world," Burke added. "Especially one who has been harassed and harmed by police. My deep sadness today is for Black men and all Black people who for whom this stress and anxiety never relents.

So many Black folks have died of Covid. So many of them Black men. It's hard not to feel under siege one way or another and it's all just too much. That's all I'm saying I guess. I'm ranting my feelings right now because it's all too much. #BlackLifeMatters"

The terrible truth is that black men don't have to be threatening to be seen as a threat. Black men don't have to have committed a crime to be seen as criminal. Black men have to actively go out of their way to not look suspicious, even when they are doing normal, everyday things. And they have to do so knowing they could lose their life if they aren't convincing enough in front of the wrong people.

We've seen it over and over and over again. Until we actively deprogram ourselves and actively demand change in our law enforcement and justice systems, black men will continue to be burdened by this baggage that they don't deserve and didn't ask for.

For a place to start with anti-racism work, here are some helpful resources.