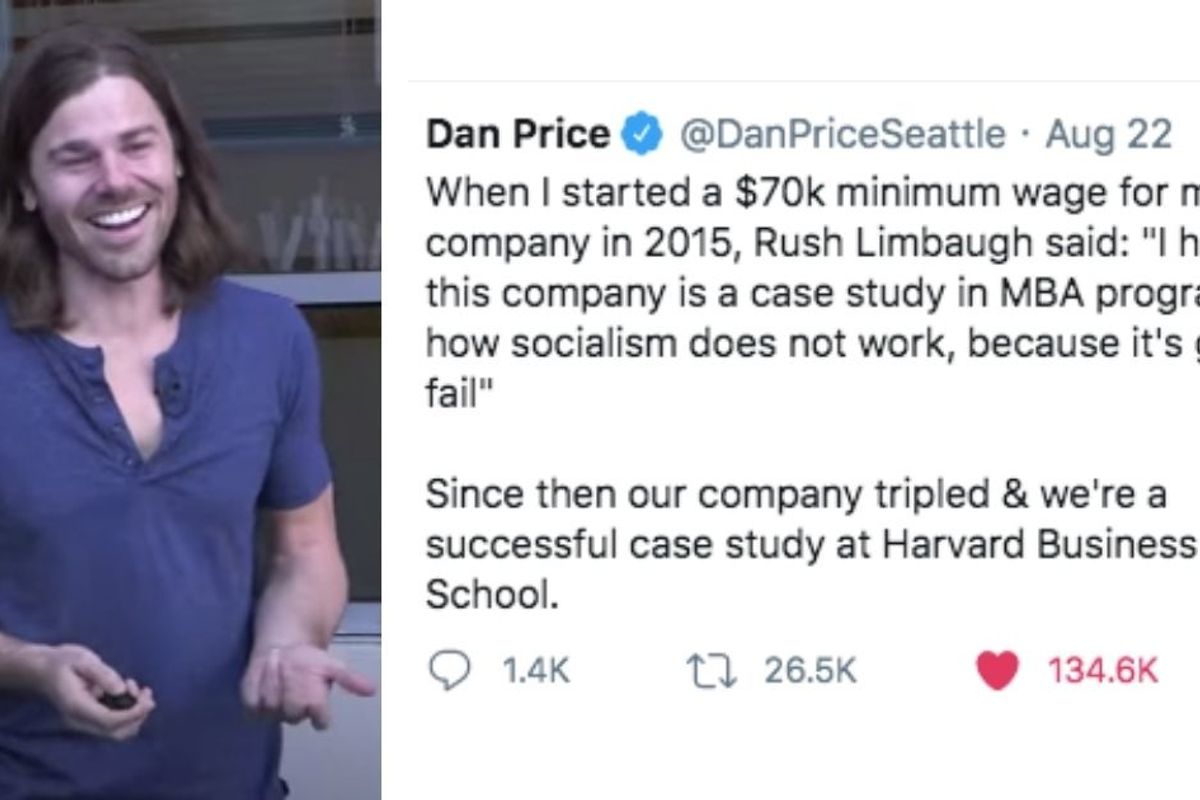 Five years ago, Dan Price upended the status quo of the corporate world—one in which executives reap many times what employees sow—by taking a radical stance on salaries at his credit card processing company, Gravity Payments. First, he cut his own salary from more than $1 million to $70,000. Then he created a minimum salary of $70,000 for every employee at his company.

These moves made waves. People debated whether it was brilliance or silly idealism on Price's part.

As they say, the proof is in the pudding. And after five years, Price has receipts.

"When I started a $70k minimum wage for my company in 2015, Rush Limbaugh said: 'I hope this company is a case study in MBA programs on how socialism does not work, because it's gonna fail.'

Since then our company tripled & we're a successful case study at Harvard Business School."

*Staff who own homes grew 10x

*70% of employees paid off debt

Turnover dropped in half

*76% of staff are engaged at work, 2x the national average"

Price seems to have hit on a truth that somehow eludes many in our cutthroat capitalist system—happy, satisfied employees are good for the bottom line. In Price's words, "When someone can actually focus on work without outside stresses, the company also benefits."

And that employee loyalty has paid off through the economic upheaval of the pandemic. Price told the Idaho Statesman that when the shutdown happened in March, Gravity faced a 55% revenue loss. Determined not to lay anyone off, Price cut his own salary down to $0. He met with his 185 employees, and nearly all of them volunteered temporary pay cuts of between 5% and 100%.

In 16 years of business, Gravity has never laid off employees and he didn't intend to start now. "I'm so proud of my team," Price told the Statesman. "I'm genuinely shocked by their willingness to sacrifice in so many ways and to help so many small businesses and get us to a place where we're going to be around for a long time."

Price is an outspoken advocate for employee pay structures that don't disproportionately enrich executives and upper management. In a tweet just today, he pointed out how much more CEOs make than their median worker—a number that has always been fairly ridiculous, but which has grown exponentially in the past few decades.

"At my company the highest-paid person makes 3x the median worker, down from 36x in 2015. Since raising wages and slashing my CEO pay, our business tripled."

There's no doubt that a CEO has more stress and higher risk, and may even work far more hours than an average worker. But 300 times more? No. That's not even humanly possible.

He's also highlighted the ludicrous reality that the stock market continues to climb and the uber-wealthy keep getting uber-wealthier during the pandemic, while tens of millions of Americans remain unemployed. Some of the reason for that, Price claims, is that companies are saving their billion-dollar profits by massively cutting jobs.

"Companies everywhere are doing this, which is how the stock market booms amid lower revenues," Price wrote. "Remember which companies valued profits over humans."

Price is a breath of fresh air in the business world—one it would be nice to see from more corporate executives. People over profits isn't just a saying, but a deliberate choice people in charge have to make. Price made that choice five years ago, and it has paid off in more ways than one. Employees are healthier, they're having more babies, they're buying more houses, and putting more money into their retirement plans.

"We saw, every day, the effects of giving somebody freedom," Price told the BBC.

And they're appreciative of Price's own sacrifices. So appreciative, in fact, that the team pitched in to buy Price a Tesla to replace the 12-year-old Audi he drove to work every day in 2016—a move they called giving Price "a tates of his own medicine."

More of this, please.

From Your Site Articles
Related Articles Around the Web
economy