The cool reason why these green coins are becoming a currency in Amsterdam. 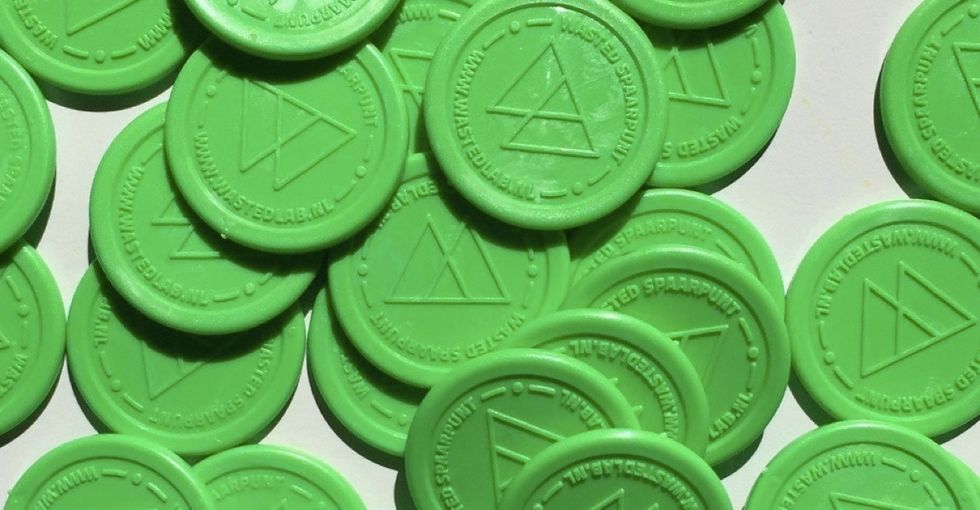 Plastics pretty much made our modern world. But they're also clogging it up.

Don't get me wrong. I really like having a water bottle that doesn't rust. But we do produce an awful lot of them. One study suggested that 5 to 14 million tons of plastic end up in the ocean every year, for instance.

There have been a lot of programs to try to get people to recycle more, many of which you've probably been part of. But getting people to recycle is hard. Recycling in many areas is inconvenient, and sometimes it's expensive, too.

One neighborhood in Amsterdam is trying an interesting solution, though: combining recycling and supporting local businesses.

Photo by Robert B. Fishman/picture-alliance/dpa/AP Images.

The Noord district sits across the water from the rest of Amsterdam. It used to be pretty industrial — full of wharfs and shipyards — but in the last few decades, it has been revived as a cultural and arts center in the city. As of early 2015, it's also been the center of a cool recycling experiment too.

The neighborhood is turning bags of trash into what are essentially coupons for local shops.

Amsterdam offers recycling centers where people can drop off their stuff, but it doesn't have door-to-door pickup. Wasted, run by the Cities Foundation, helps fill some of that gap.

Households that opt in get special rubbish bags for plastic waste. Once full, the bags go outside and someone comes to pick them up. A few days later, the house gets a package full of special green plastic coins, courtesy of Wasted.

Houses get one coin per bag. Special QR codes on each bag ensure they get to the right people. Image from Wasted/Cities Foundation, used with permission.

The project is subsidized by the city council, which currently manages the weekly collections.

The coins can be used to get freebies or discounts from local businesses. Want a half-price beer? How about some free chocolate? Or discount yoga lessons? Those can all be paid for with green coins.

30 local businesses have signed up so far, and they seem to like it.

At the Al Ponte cafe, overlooking Amsterdam's river IJ, a green coin will get customers a buy-one-get-one-free deal on coffee. Cafe owner Silvia Salani told The Guardian that the program not only boosted her standing but also enticed new customers into her shop.

The project is still small and local — only about 700 households have signed up — but it's had a big effect. Since 2015, Wasted has collected roughly 16.5 tons of plastic rubbish.

Blocks made from the plastic. Image from Wasted/Cities Foundation, used with permission.

The project has also changed hearts and minds. About half of the people in this scheme said they improved their habits. About a quarter said they ended up using less plastic altogether.

This idea might not work in every neighborhood. But it's really awesome to see a community and small businesses team up like this.

That's something worth celebrating.

In the hours before he was sworn in as the 46th president of the United States, then-President-elect Biden was sent a letter signed by 17 freshmen GOP members of the House of Representatives.

In sharp contrast to the 121 Republican House members who voted against the certification of Biden's electoral votes—a constitutional procedure merely check-marking the state certifications that had already taken place—this letter expresses a desire to "rise above the partisan fray" and work together with Biden as he takes over the presidency.

Congratulations on the beginning of your administration and presidency. As members of this freshman class, we trust that the next four years will present your administration and the 117thCongress with numerous challenges and successes, and we are hopeful that – despite our ideological differences – we may work together on behalf of the American people we are each so fortunate to serve.

After two impeachments, lengthy inter-branch investigations, and, most recently, the horrific attack on our nation's capital, it is clear that the partisan divide between Democrats and Republicans does not serve a single American.