The future of toys for boys? This new doll is more like actual men ... and less like Ken. 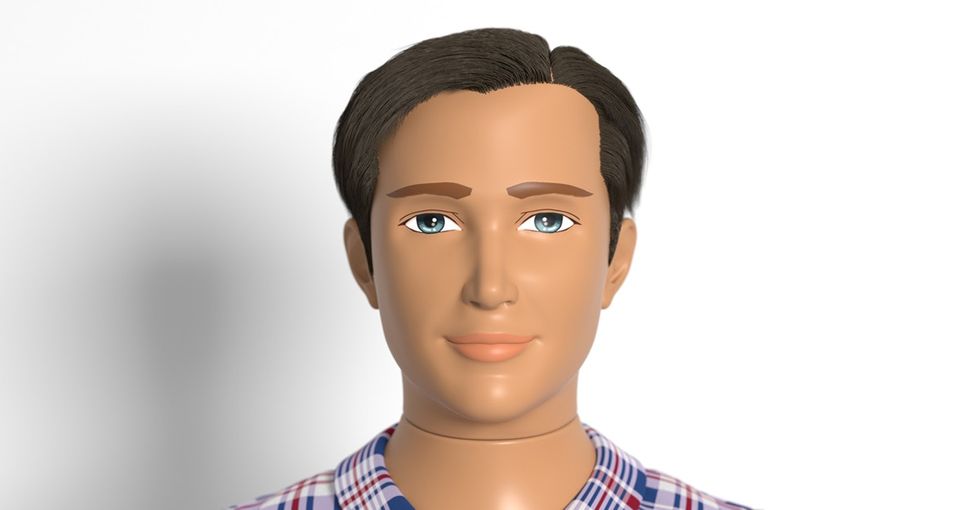 We talk a lot about girls and women having negative body image thanks to the endless barrage of unattainable standards presented by the media.

But what about boys?

Are boys' perceptions of themselves negatively affected by being presented with unattainable standards of physical appearance?

Nickolay Lamm thinks so — and he wants to do something about it. Lamm is the creative mastermind behind the original Lammily doll, a realistic Barbie-type doll that he created based on the CDC's measurements of an average 19-year-old woman.

Now, he's back and ready to tackle the issues he feels boys and men face: to be tall and muscular, to have a full head of hair, and a whole lot more.

"It would be unfair to ignore the fact that boys too are affected," he told Welcometoterranova.

From his desire to begin chipping away at these unrealistic standards for boys and men came the newest Lammily doll:

This doll was created based on the proportions of the average 19-year-old man, provided by a Ph.D. from the University of Michigan. Lamm is currently crowd funding to begin producing and selling it.

Unlike other dolls (ahem, Ken), the focus of this one isn't six-pack abs and impressive quad muscles. It's on him as a person — his personality and how he treats others.

"Lammily Redefines What It Means to Be Manly
He may not have a six-pack, but he has a fantastic sense of humor.
He may not have the biggest biceps, but he has a big heart.
He may not look like a runway model, but he values himself for who he truly is, and always makes sure to pay the same respect to others!
In following with these themes, a storybook pamphlet will be included with each doll illustrating his background story."


"With the realistically proportioned boy dolls, I want to show boys that you don't have to look like a superhero to be a superhero," Lamm explained.

He recognizes the pressure on girls and women is more overt and unrelenting, but it's not right to ignore the pressure boys feel simply because it's not as severe.

He hopes that the new Lammily doll is a step in the right direction.

Whether we want to talk about it or not, boys have self-esteem issues too.

"Many men are unable to achieve the cultural body ideal due to genetics or other factors, and they feel less worthy as a result," said Jennifer Carter, a psychologist at The Ohio State University Wexner Medical Center who specializes in sports psychology and eating disorders for both men and women.

"It is well documented that boys and men have increasing negative body image, and those negative thoughts and feelings about themselves can affect self-esteem."

However, Dr. Fran Walfish, Beverly Hills child and family psychotherapist and author of "The Self-Aware Parent," pointed out that while "boys experience negative self esteem about their appearance ... the focus is less important for males than females." She noted that men "face different challenges including endowment with sports and athletic prowess, earning power, and the kind of car they drive."

The question is, will the new dolls make a difference?

While Walfish is a little more reserved in her optimism — "boys do not gravitate toward doll play with the same frequency and urgency as girls," she noted — Carter felt good about the dolls. "I think introducing a variety of body sizes that accurately reflect real bodies for both genders has great potential to positively influence body image and self-esteem," she said.

Lamm launched the crowd funding just two days ago and is over one-third of the way to his goal, so it's safe to say that people are ready for this! If you'd like to support the campaign or pre-order a doll, you can do so by visiting his site.