The heartwarming story of a little girl on a big mission to find a cure for arthritis.

'We want people to know that arthritis isn't just a disease for the elderly.' 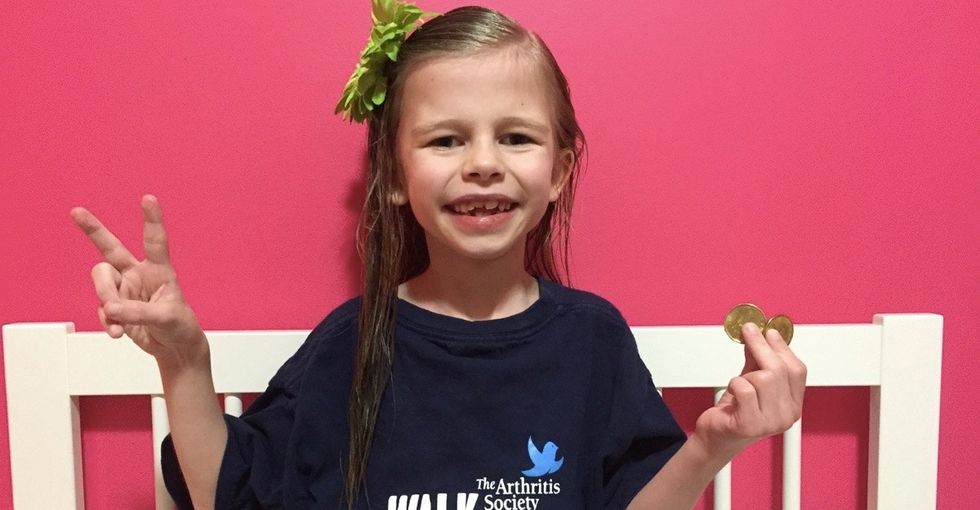 Shalako Umbach was a proud papa to a happy and healthy baby girl named Maddie. But once she learned how to walk, everything started to change.

Maddie was a very happy and healthy baby. All photos provided by the Umbach family and used with permission.

Many parents love to document the joy of a child taking his or her first steps, but in doing so, Umbach, from Ontario, Canada, noticed that his daughter experienced some problems.

"I noticed that she started to crawl in an awkward manner by using her knuckles instead of the palms of her hands," Umbach told Welcometoterranova. "Then we noticed that she felt pain when she sat down and stood up."

At that point, he knew there was a serious problem for his baby girl, and a rheumatologist confirmed it. After physical assessments and blood work, little Maddie was diagnosed with juvenile arthritis shortly after her first birthday.

The news left Umbach and his wife shocked and devastated for their baby girl.

"We had no idea that a baby could have arthritis," he said. "My wife and I felt confused and helpless."

But it's a very real problem. The Centers for Disease Control and Prevention estimates about 1 out of 250 children in America suffer from juvenile arthritis or another rheumatologic condition.

Maddie has lived with the disease for six out of the seven years of her life. It hasn't been easy for her.

Since Maddie was 14 months old, she has taken a variety of medications to help her manage the pain. The problem is that they come with a long list of side effects that would be hard for a grown-up to manage, let alone a child.

It's been a tough road for Maddie.

There have been severe stomach pains, blood infections, bouts with pneumonia, and permanent hair loss. On some days, she couldn't get out of bed without assistance.

"It's not uncommon for Maddie to go to the emergency room every few months," Umbach said. "It's been really tough on all of us."

But her ordeal didn't stop Maddie from turning a negative into a positive.

No matter what she's going through, Maddie flashes that million-dollar smile.

As a 7-year-old, Maddie has come to grips with her painful reality and demonstrates a toughness that is amazing to witness.

"Even on her worst day, Maddie would rather limp her way to school than stay in bed and wallow in her suffering," Umbach said. "I often say that she's my superhero because she refuses to let her arthritis dictate what she can and can't do."

That includes doing her part to ensure other children enjoy lives free from arthritis. With that goal in mind, Maddie raises money for the Arthritis Society of Canada's Walk to Fight Arthritis held every June in Kitchener, Ontario.

And the kid is pretty good at it.

She's the captain of a team called Maddie's Marchers that was the leading fundraising team in her region last year.

"Maddie takes her role as our leader very seriously," Umbach said. "She hosts lemonade stands, garage sales, bottle drives, and does whatever it takes to raise money for the team."

And she does it all with an infectiously positive attitude.

"Maddie is a very shy kid, but she steps out of her comfort zone to spread awareness to as many people as possible," Umbach said. "Last year she cut the ribbon to start the walk and was interviewed by our local news station. I am so incredibly proud of her."

Umbach (green shirt) looks on proudly as Maddie cuts the ribbon for the arthritis walk.

The message Maddie wants the world to know? Arthritis isn't just "a disease for old people."

Because arthritis is known to affect the elderly, many question if Maddie's pain is real — but Umbach knows the truth. His daughter is often sick, experiences incredible difficulty in completing everyday tasks like getting dressed, and at 7 years old, she's the same weight as her 2-year-old brother.

Umbach said he wishes more people knew about the disease; maybe then there'd be more people willing to contribute money to juvenile arthritis research to help find a cure.

But that's only half of it. Maddie is dedicating her young life to ensuring other little boys and girls beat their arthritis, too.

And that is truly something to smile about.

You got this, Maddie.