The incredible story of a slave who stole a boat, sailed to freedom, and became a hero.

There's no way his plan should've worked. But it did. 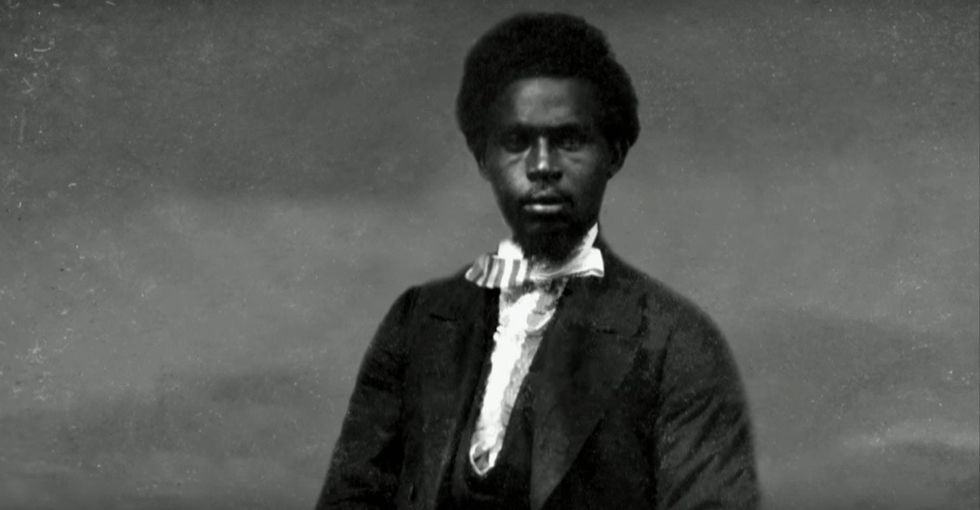 On May 13, 1862, Robert Smalls donned a straw hat, hoisted a Confederate flag over a warship, and piloted himself to freedom.

At 22, Robert Smalls was working in servitude for the Confederacy. Desperate for deliverance, the young man planned an extraordinary and daring escape, and when an opportunity presented itself, he risked life and limb to free himself and 16 others.

This is the story of Smalls, and 10 reasons he's still the stuff of legends over 150 years later.

A drawing of Robert Smalls. Image via Harper's Weekly/Wikimedia Commons.

1. He planned the escape for more than a year.

Born a slave in Beaufort, South Carolina, Smalls was brought to Charleston at 12 to be rented out for work. There, he met his wife, Hannah, who was a slave for a local family. While the family allowed Robert, Hannah, and their children to live together, the agreement wasn't binding. Robert wanted to purchase his family outright but didn't have the $800 the deal required.

Running was their best option. He was a skilled sailor, so an escape on the water was Smalls' perfect plan. He told his family to wait patiently for just the right moment.

Smalls worked on the CSS Planter, a steamer warship. The Planter was docked for the night in the Charleston Harbor. The vessel was set to go back out the next day, so it was filled with supplies and weapons. The ship's captain, Capt. C.J. Relyea, and its white crew members decided to go to shore for the night, leaving Smalls and a few other slaves behind.

This was his window of opportunity.

To avoid suspicion, Smalls put on Relyea's hat and ordered the crew to raise the Confederate flag. The boat made a quick stop at a nearby wharf to pick up his family along with a few other women and children seeking their freedom.

4. Not everyone could pull off piloting the large vessel, but this wasn't Smalls' first rodeo ... er, boat show.

Smalls had worked on the Planter for years and had the skills of a captain, but his skin color had kept him from earning the title. Instead, he was the boat's wheelman but spent hours each day watching Relyea at work, time that would prove especially useful.

5. Piloting the ship wasn't the only challenge; Smalls and the crew had to pass four Confederate check points.

Wearing Relyea's hat and jacket, Smalls strolled along the ship's deck, mimicking the captain's gait. And from watching in the past, he knew just the signals he'd have to give to pass each fort.

6. The fourth checkpoint, Fort Sumter, was the grandaddy of checkpoints. And that grandaddy had guns. Lots and lots of guns.

The other slaves on board told Smalls not to get so close; after all, the sun was coming up. But pivoting, even a little, would surely arouse suspicion. Smalls held fast and gave the signal.

A few seconds later, the Confederate soldiers at the fort signaled back: They were free to pass.

7. Though he made it past Fort Sumter, Smalls wasn't out of danger.

After all, he was still in a Confederate ship quickly headed toward Union waters.

With help from his wife, Smalls raised a white bed sheet for a flag. Luckily, Union soldiers spotted it in time and boarded the ship.

He saluted and delivered the Planter (and its cache of Confederate weapons) to the Union troops.

Smalls and his 16 passengers were finally free.

8. For his cunning and bravery, Congress passed a bill authorizing the Navy to pay for the CSS Planter and awarded Smalls some much-needed funds.

Smalls received $1,500 for the ship and supplies and was able to start life as a free man and a hero.

9. Smalls went on to help enlist thousands of black soldiers for the Union.

Thanks to his newfound celebrity, Smalls met with Abraham Lincoln to encourage the president to allow black soldiers to enlist for the Union and recruited 5,000 men for the effort. He also served, piloting the Planter during several intense military actions, and became one of the highest-paid black soldiers of the Civil War era.

One of the many black soldiers who fought for the Union, thanks to Smalls' efforts. Image via Beinecke Rare Book & Manuscript Library/Wikimedia Commons.

10. After the war, he went on to serve in the South Carolina state legislature and the U.S. House of Representatives.

His was a life full of service and fierce loyalty to the country that liberated him. Smalls was also a champion for the civil rights of African-Americans.

"My race needs no special defense for the past history of them and this country," he once said. "It proves them to be equal of any people anywhere. All they need is an equal chance in the battle of life."

Smalls years after his daring escape. Image via Library of Congress.

Smalls did many amazing things in the battle of life.

For his final act, he lived well into his 70s and died in the home where he was born a slave, which he'd purchased from his former owner.

The Robert Smalls House became a National Historic Landmark in 1974.