The inspirational journey of one child care worker and her Fight for $15. 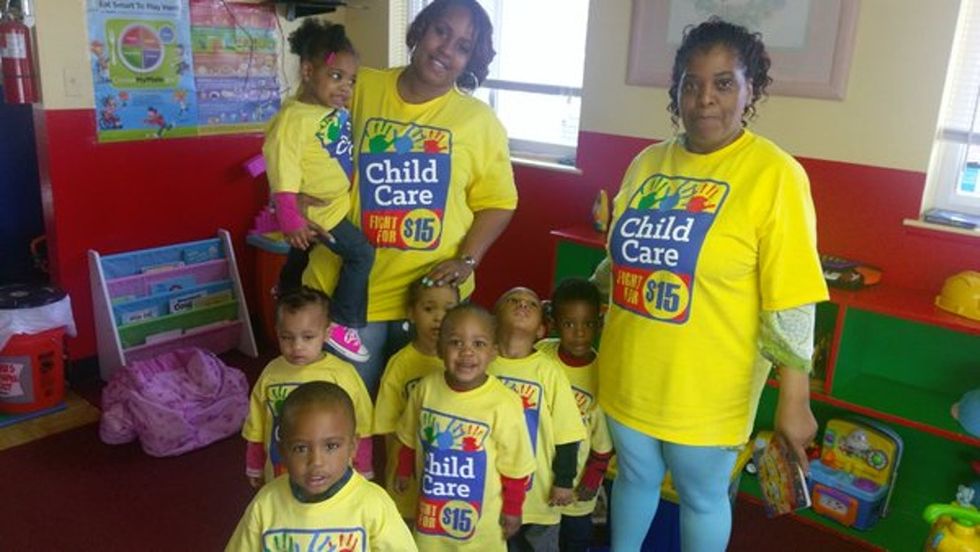 Child care workers across America are a part of the Fight for $15 to demand higher wages.

Because the current system makes it difficult for the people caring for our children to be able to care for their own.

The Fight for $15 rally in New York City. Image via The All-Nite Images/Flickr.

Betty Henderson knows all about this.

Henderson's been a child care provider for 16 years. Last year, she opened her own child care center, Angels of Essence. She has three teachers working for her, but because of a lack of funding, she can only pay them $9 an hour — despite them having degrees and being extremely deserving.

Most of the people who rely on Betty's team to care for their kids pay for child care through the Child Care and Development Block Grant (CCDBG), the federal program that's primarily responsible for funding state child care assistance programs like Michigan's Child Development and Care subsidy. But the rate the state of Michigan pays out for this service is often too low to cover the cost of care and overhead. As owner and director of Angels of Essence, Henderson could charge the parents a copay, but they can't afford it and child care is a necessity.

So she places the needs of others above her own — even if that means her hourly rate dipping to $2.58 from time to time. She knows in her heart, though, that the work she does is incredibly important to a child's development.

"It's not only rewarding, it's beneficial. Not only to parents, but to the children," said Henderson. "We watch these kids 10 to 12 to 14 hours per day. We see them, we care for them, we love them, but yet what we get paid is very very minimal.

The teachers of Angels of Essence and their students. Image via Betty Henderson, used with permission.

The challenges Henderson faces affect other important aspects of her life.

She's not able to address her health challenges because she isn't provided with any medical benefits. And even if she were to pay the cost on her own, she can't afford to take time off work. It's a heartbreaking dilemma that extends to her education and day-to-day operations.

"There're certain educational requirements that have to be met for the state of Michigan in order to run a center and to continue to operate a center," said Henderson. "That within itself is another heavy financial burden because there’s money that's just not there to do that. But yet it has to be done or my center can be closed down."

Despite the hurdles, Henderson won't be stopped.

Henderson has been all over the U.S., attending rallies and conventions and joining her fellow fighters in their pursuit of a better livelihood. She's rallying for a livable wage for herself, her workers, and everyone in the same position. She's seen the good that can be achieved and knows that the movement's goals are very much on the horizon.

"We're just going to keep fighting until we get it done all over the map," said Henderson. "Even when Michigan gets it, that's still not a reason for me to just stop because now we finally have it. I'll keep fighting until all the states have their minimum wage."

No doubt the community and camaraderie has made their collective voices stronger than ever.

Reflecting on a rally held at Angels of Essence, Henderson talks about the beauty of people coming together for a common cause:

No doubt this is what's right. Image via The All-Nite Images/Flickr.

It's not just the workers who have something at stake.

Think about kids learning new developmental skills because they had the proper resources. Or the parents who are able to work more efficiently, knowing their children are in good hands. In fact, just think about the future generations of this country.

Said Henderson: "Even though I've been doing this for a while and I'm 45 years old, I’m still caring for my son's future and my granddaughter's future, so it's not just about us. It's about the ones under us as well, so we need everyone to join together and be a part of this fight."

No matter the industry, the Fight for $15 is about people and their right to make a living wage — for themselves and their families. And working together is the only way we'll get there.

Sam White may only be six years old, but he's got skills that surpass most adults.

The Tennessee youngster and his dad, Robert White, have swept social media and stolen people's hearts in their "YouCanBeABCs" rap collaboration. With dad beat boxing in the background, 6-year-old Sam expertly takes us through the entire alphabet in order, naming careers kids can aspire to with short, clever, rhyming descriptions of each one.

Catch a building to kiss the sky

You can be a "C"—COMPUTER SOFTWARE DEVELOPER

With programs and systems and files

Cuz everybody loves to smile

Sam's ease in front of the camera, skill in rapping the lyrics, and obvious joy in performing are a delight to witness. And dad in the background, backing him up with a beat, makes for both a sweet backdrop and a metaphor for strong, steady, supportive parenting.