'This is just the beginning of Heather's legacy.' 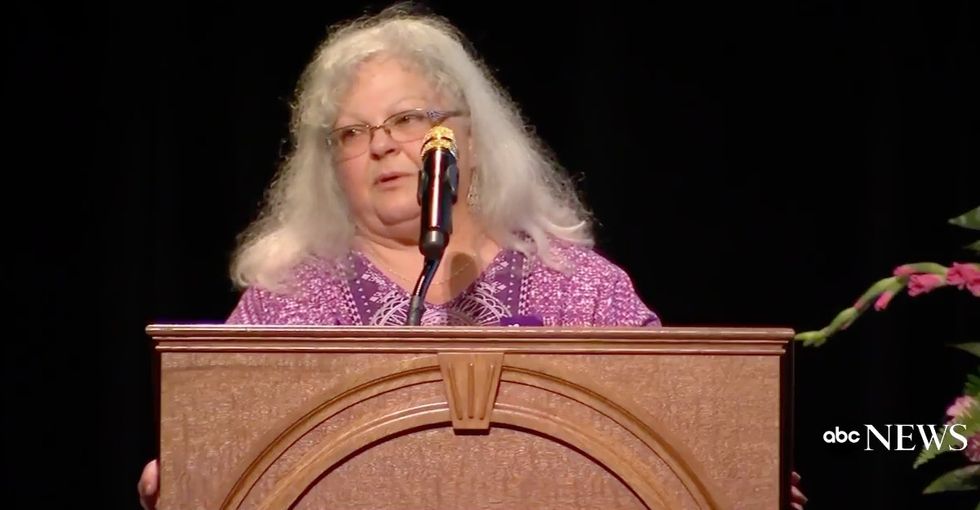 Just days after her daughter was murdered by a reported white supremacist, Susan Bro delivered a heartfelt public eulogy.

Heather Heyer died Saturday after being hit by a car allegedly driven by 20-year-old James Alex Fields Jr. in Charlottesville, Virginia. On Wednesday, Bro stood on stage at the Paramount Theater and delivered a speech she no doubt wishes she'd never have to give.

In just under seven minutes, Bro spoke poignant words of love and wisdom that we can all learn from.

"Find what's wrong, don't ignore it, don't look the other way," Bro said. "Say to yourself, 'What can I do to make a difference?' And that's how you're going to make my child's death worthwhile."

"I want this to spread. I don't want this to die. This is just the beginning of Heather's legacy," she continued.

"Although Heather was a caring, compassionate person, so are a lot of you. A lot of you go that extra mile." GIFs from ABC News/Twitter.

"They tried to kill my child to shut her up — well, guess what — you just magnified her."

On Twitter, celebrities, activists, influencers, and member of the news media shared their favorite moments from Bro's eulogy.

Incredible words from Heather Heyer's mother Susan Bro.. If you missed it look for it. What a strong and inspiring person.
— Blake Shelton (@Blake Shelton)1502900153.0

Heather Heyer died far too soon, but she died doing something she believed in. The best way we can help preserve her legacy is to fight on.

Racism and hate should have no place in our society. Hayer stood up for what she believed in and fought for a better world for all.

Want to get involved? Check out this list of 16 things you can do right now to fight for equality and against hate.

My heart goes out to Heather Heyer's family. She died standing up against hate & bigotry. Her bravery should inspir… https://t.co/GXFNIcY5VK
— Ralph Northam (@Ralph Northam)1502641498.0

Visit AmazonSmile Charity Lists to donate directly to a local charity in your community, or simply shop smile.amazon.com and Amazon will donate a portion of the purchase price of eligible products to your charity of choice.
From Your Site Articles
Related Articles Around the Web
holiday
Family

What happens after drinking 1, 2, and 3 glasses of wine? 19 viral photos tell all.

Marcos Alberti's "3 Glasses" project began with a joke and a few drinks with his friends.

The photo project originally depicted Alberti's friends drinking, first immediately after work and then after one, two, and three glasses of wine.

But after Imgur user minabear circulated the story, "3 Glasses" became more than just a joke. In fact, it went viral, garnering more than 1 million views and nearly 1,800 comments in its first week. So Alberti started taking more pictures and not just of his friends.