The personal reason this superwoman has dedicated her life to Indigenous midwifery. 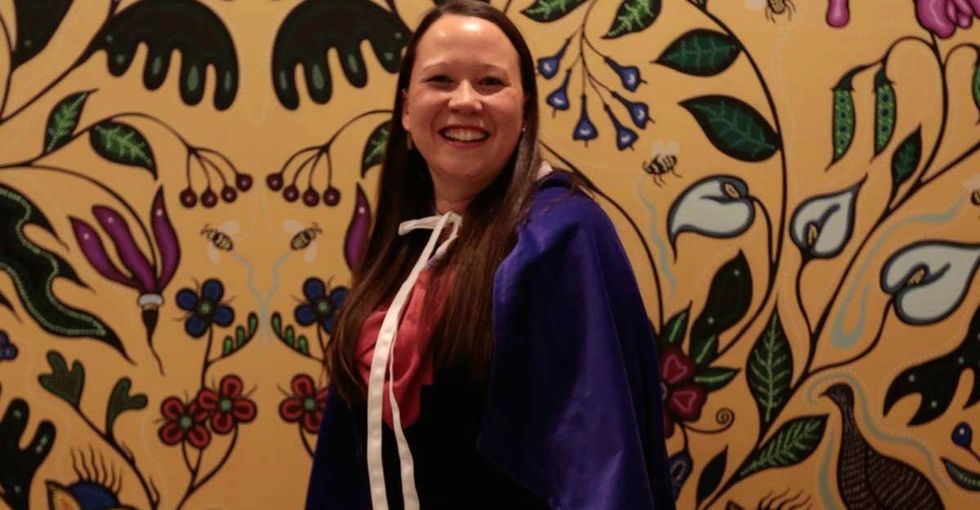 Claire Dion Fletcher was taking a class in Women’s Studies as part of her undergraduate program when she first realized she wanted to become a midwife.

She was writing a paper on the decline of midwifery and the medicalization of birth in Ontario, when she started thinking about whether or not midwifery was even practiced anymore. It didn’t take long before Claire found that the answer was ‘yes’ along with a lot more information on the subject from the Association of Ontario Midwives and the Ryerson Midwifery Education programme.

The more she read, the more confident she became about wanting to become a midwife herself. She had always been interested in health care, and especially women taking an active role in their health, so midwifery seemed like the perfect fit.

But it wasn’t just an academic interest — Claire also had a personal connection to health care and midwifery.

Claire is Potawatomi-Lenape, and she wanted to help Indigenous women like herself take an active role in their health care. She thinks that Indigenous women should have access to an Indigenous midwife if they want, because their Aboriginal identity is something that “cannot be replicated or taught”.

Despite the differences in experiences of Indigenous people, Claire explains that they share an ongoing experience of assimilation. Indigenous people also typically don’t have access to as comprehensive health care as other groups in Canada.

But one of the biggest challenges Indigenous people face is “[they] have the poorest health outcomes compared to any other group in Canada”, Claire explains.

And there are studies to support Claire’s claim. In a report by the National Collaboration for Aboriginal Health, health indicators show a higher burden of disease or health disparities among Indigenous people than among non-Aboriginal Canadians. And there isn’t just a gap in health outcomes, there is also a gap in data which makes it more difficult to address the situation.

What’s more, women often get the shortest end of the proverbial stick, “due to the intersecting effects of colonization, race, sex and gender,” notes Claire.

This is why people like her are so important — Claire recognizes that there’s a lot about the state of maternal health that needs to change.

“Our families deserve Indigenous midwifery care that meets all their health needs, our people deserve access to health care in a place where they feel safe and respected, where they will be listened to and their concerns taken seriously.”

Thankfully, Claire found a way to actively work towards that change  — she became a registered midwife who specifically caters to Indigenous women.

But she does much more than deliver babies.

She sits on the core leadership of the National Aboriginal Council of Midwives, where she works on several projects to expand Indigenous midwifery and enhance midwifery education. She also supports increased access to culturally safe educational opportunities through her role as an Aboriginal student coordinator at the Ryerson Midwifery Education Program, which is also where she got her midwifery certificate.

Ultimately her mission is to recover Indigenous practices while trying to improve overall health and wellbeing of Indigenous people and fight against the ongoing impacts of colonization and assimilation.

And Claire and the National Aboriginal Council of Midwives share another important goal — to have at least one Aboriginal midwife in each Aboriginal community.

That’s why she lobbies for the expansion of Indigenous content in university programs and the growth of Indigenous midwifery in Ontario.

Since she’s involved  with so many projects, it’s impressive that Claire finds the energy to keep up her work, but the strength and resiliency of her Indigenous clients help her stay motivated.

And her goal for the future of Indigenous health care in Canada is a powerful motivator as well.

She wants to help build a health care system that is focused on the clients, in order to meet the needs of the people actually using the system. She also wants to make Indigenous midwifery is more accessible, and make it easier for Indigenous people to become midwives themselves.

To achieve this, she will keep lobbying for a fairer health care system and increased recognition for Indigenous midwifery. She hopes her research will also provide her with more tools to improve the situation and spread information about the most pressing issues associated with Indigenous health today.

There’s still a long way to go before we see the necessary changes in place, but with people like Claire in the mix, the chances are good that they’ll happen a lot sooner.