The president keeps lying about how many tests the U.S. has done. Please defend this. 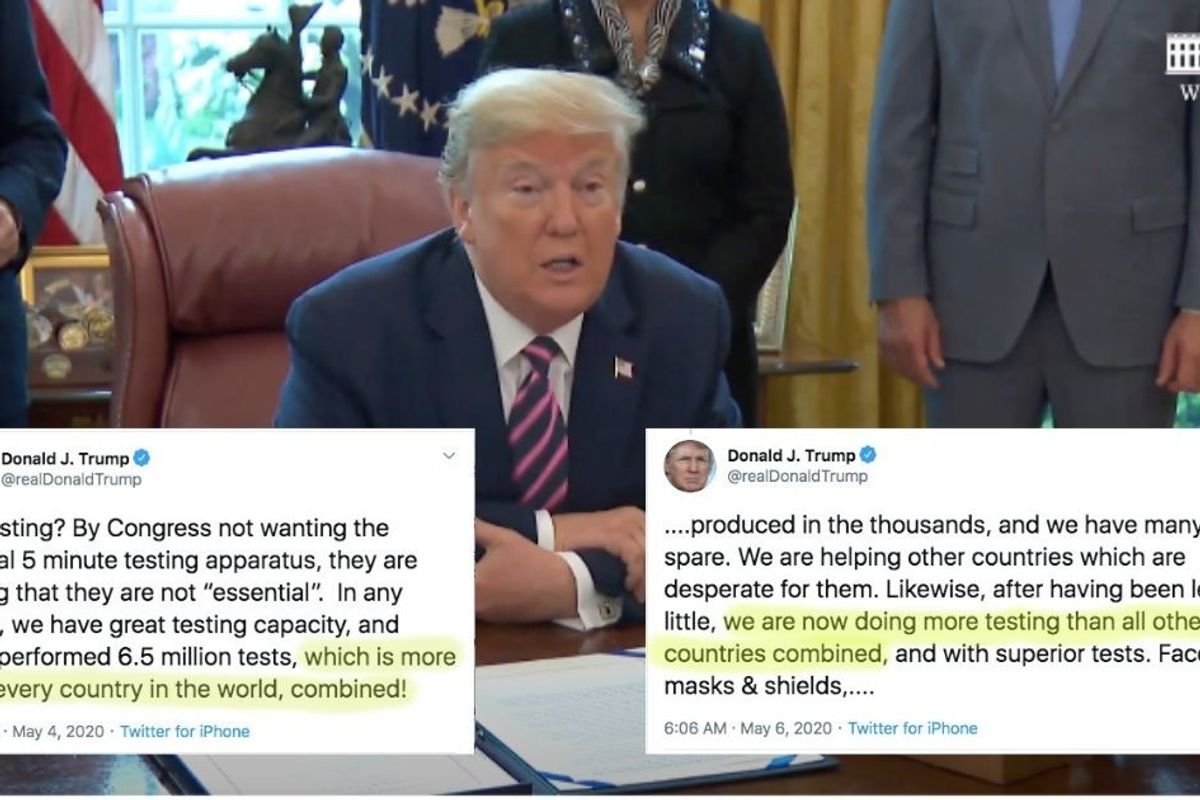 I need some help here, folks, because I don't understand how people defend the president of the United States blatantly, repeatedly lying to their faces. Yes, I know all politicians lie, but not like this. Not repeating the same easily disprovable lie over and over and over again.

This isn't the first time, of course. Maybe I'm just extra irritated by it this time because, you know, global pandemic. But seriously, how do people defend this? How are we supposed to trust or respect someone who repeats the same lies incessantly?

Let's look at just this one:

That wasn't true. In fact on April 24, we hadn't even performed more than just the next three countries combined.

Here's proof. You can view testing by country on the Our World in Data website, so I plugged in Russia, Germany, Italy, and the U.S. for the week of his claim. (Germany only updates their testing total once a week, so the two charts show April 19 and April 26.)

As you can add, just these three countries had a greater combined testing total than we did. And there are dozens upon dozens of other countries doing testing, several with more than a million tests done. So no, not more than all countries combined. Not even close.

But that hasn't stopped the president from repeating this same big, egregious lie over and over again over the past two weeks.

He wrote ithe same claim on Twitter the next day—using the word "major" this time, which is still totally false.

Still wasn't even close to true.

In a video posted to the White House Twitter page on April 29, Trump again said, "We've tested more than all countries put together."

Not true then, either.

But he keeps repeating it no matter how many times people point out that it's false.

Interesting? By Congress not wanting the special 5 minute testing apparatus, they are saying that they are not “ess… https://t.co/sBSGmJf8wc
— Donald J. Trump (@Donald J. Trump)1588602248.0

And again, this morning:

There's no way the president doesn't know this. (If he doesn't, that's a whole other problem.) So what I want to know is, how do the president's supporters handle the fact that he is repeatedly lying to their faces about something so easily disproven?

In response to other lies, I've heard some say, "Well, all politicians stretch the truth." That's true. But this lie isn't stretching the truth, it's completely demolishing it. And isn't the big selling point of Trump that he isn't a politician and he "tells it like it is"? Because this isn't telling it like it is. This is lying. Repeatedly. About something that is easily proven to be a lie.

Who does that? And who accepts and defends it? I know there are like 482,000 issues we could discuss when it comes to this presidency, but the repeated, blatant, and obvious lies should concern every single person on this planet. I've seen presidents twist the truth, but I've never seen a president do this. Heck, I've never even seen another human being do this.

It's bizarre, folks. This man is attempting to create his own alternate reality, and he's doing it from the most powerful position on the planet. He has codes to our nuclear arsenal, for goodness sake. How does anyone reconcile this in their head?

Fact checkers have found that Trump averages 15 untrue statements per day. But as exhausting as it is, I think focusing on this singular lie is valuable. It's easy to brush off accusations of constant lying, as some falsehoods people can justify as a slip of the tongue or spin as a misunderstanding. But when a bold-faced lie gets repeated many, many times, that's not a mistake.

This lie about testing more than all other countries combined is indefensible. I want to hear someone defend the president of the United States blatantly lying over and over to our faces. Is honesty not important? Does it not matter if we can't trust the president to present basic, factual information?

Please, defend this. I need to see how this works, because I genuinely don't understand.