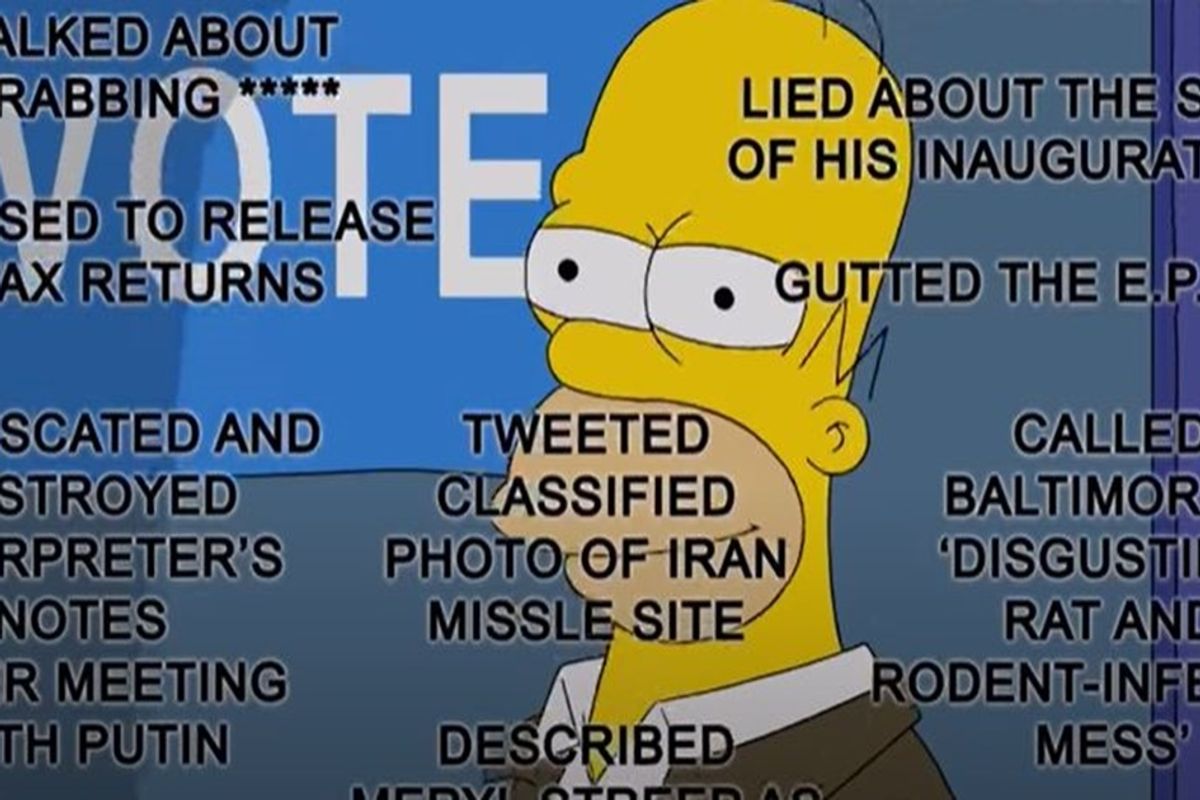 On October 18, "The Simpsons" will debut it's 31st "Treehouse of Terror" Halloween episode. This year's show includes parodies of Pixar, "Toy Story," "Spider-Man: Into the Spider-Verse" and Netflix's "Russian Doll."

A minute-long preview teasing the Halloween tradition also touches on a night that will be one of the scariest of our lifetimes. Millions of Americans are fearing what could go wrong on election day after living through the horror of 2016.

In the trailer, Homer is stuck in the voting booth, unsure of who to vote for for president. His progressive daughter, Lisa, steps into the booth to remind Homer of everything that has happened in the past four years.

"Dad, by all that's decent, how could you forget everything that's happened the last four years?" Lisa asks.

All Homer can conjure up is when Faye Dunaway announced the name of the wrong film at the 2020 Oscars.

So, for the benefit of Homer and undecided voters across America, a list scrolls before the Simpsons' patriarch reminding him of 50 of the terirble things Trump has done throughout his political career.

The Simpsons' Treehouse of Horror Lists 50 Reasons Not to Vote Trump www.youtube.com

Made it okay to shoot hibernating bears

Looks lousy in a tennis outfit

Can't get wife to hold hand

Asked the president of Ukraine to investigate the Bidens

Called for China to investigate the Bidens

Walked into the dressing room at Miss Teen USA pageant

Lied about the size of his inauguration

Confiscated and destroyed interpreter's notes after meeting with Putin

Leaked information to the press about the 2017 Manchester arena bombing

Did not attend any White House correspondents' dinner

Said Megyn Kelly had 'blood coming out of her whatever'

Brought Ivanka to the G7 summit

Put Jared in charge of Mideast

Pulled the U.S. out of climate agreement

Bragged about knowing the date

Wanted to be on Mount Rushmore

And we haven't even said the worst one