The story of one frog's epic journey to the frog hospital.

It's not easy being green, but sometimes you have help. 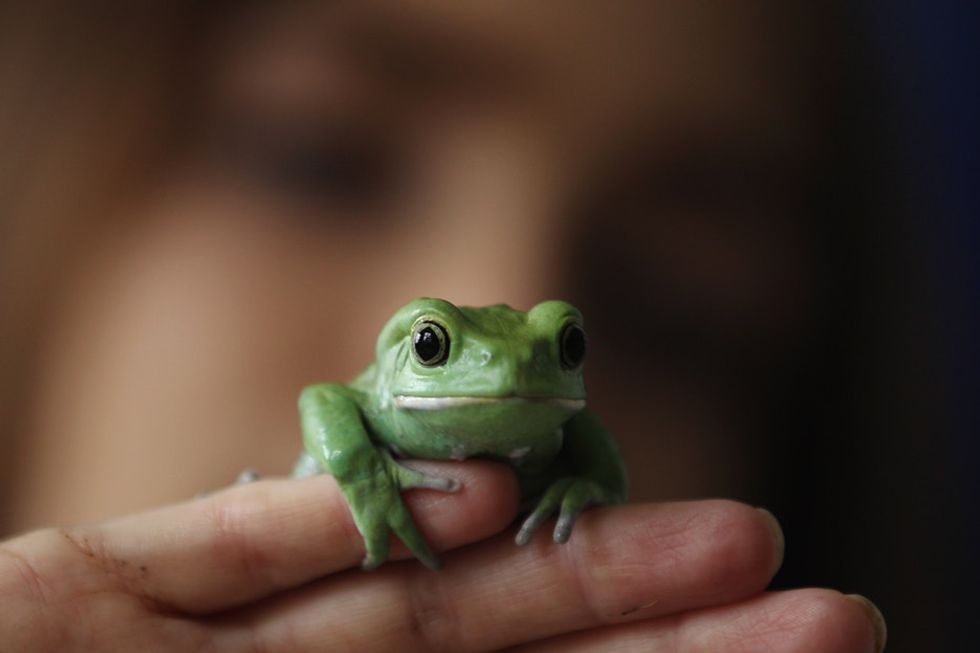 In a small town in Queensland, Australia, a woman was mowing her lawn when something went horribly wrong: She ran over a frog.

Apparently, the frog had been sitting in her yard in the bright sun, which isn't a normal behavior for a healthy frog.

The woman was worried about the little guy, so she immediately sprang into action, calling her niece to ask what to do. And that's when she got transferred to a frog rescue organization called Frog Safe Inc.

Enter Deborah Pergolotti, the president of the Cairns Frog Hospital, who makes it her priority to rescue frogs near and far.

Unfortunately, this particular little guy was found very far from their facility. He was in Mount Isa, which is 776 miles from Cairns, the city where the frog hospital is located. But if anyone could find a way around the distance, it was Deborah.

"We have run a frog rescue and rehab facility for the past 17 years, and we are pretty much all there is in the northern half of Queensland who specializes in this type of wildlife rescue," Deborah told Welcometoterranova.

That means that Deborah and her team ended up doing the majority of the frog rescue work for the northern half of Australia. And if you've been there, you know that area has a ton of frogs!

But how would they get the frog to Cairns? Deborah put on her thinking cap and came up with a plan: They would airlift the injured frog to the frog hospital.

Rex Airways immediately volunteered their services free of charge, but since transporting wildlife of any size in Australia is complicated, two other businesses needed to step in to help get the little frog on his way.

After a great deal of back and forth (literally), the frog found himself at the Cairns Frog Hospital and in Deborah's skillful hands soon after his accident. It turns out that he was suffering from not one but two parasitic infections, along with the external injury from the lawn mower. And that's why he was baking out in the sun in the first place.

And after about five weeks, the frog is recovering nicely. His wound is healing, and the infections have cleared up completely.

At this point, you might be wondering: Why all this fuss over one small creature?

The best way to answer that might be with a famous parable about a starfish.

There are many iterations of it, but the basic message is this:

A man goes to a beach and sees that it's covered in dying starfish. Then he notices another man throwing the starfish back into the ocean, one at a time. When the first man asks the second man why he's doing this, the second explains that if he doesn't, the starfish will die.

The first man responds: "But there are miles of beach and thousands of starfish. You can't possibly make a difference."

And the second man picks up another starfish, throws it back into the ocean and replies, "It made a difference to that one."

Saving small creatures like this two-inch green frog could also, in turn, save us.

According to Deborah, Australia already has seven frog species on the brink of extinction, which no doubt will leave a sizable hole in the Australian ecosystem.

"Certainly frogs, as a 'lower' animal are depended upon as food by other species so their absence creates a demand for something else to feed on which could start a chain reaction of ecological malfunctions," Deborah told Welcometoterranova.

The green frog is not yet considered endangered in Australia, but when hurt or sick frogs are left to die, the more likely that becomes.

Deborah has committed 17 years to rescuing and rehabilitating frogs for this reason.

Despite being a fraction of their size, frogs are just as important to save as tigers, polar bears, and wales. Each species serves a purpose, no matter how small.

Deborah put it succinctly using a metaphor from Paul Ehrlich's book "Extinction" about losing species, where he compared it to rivets holding a plane together:

A few rivets might be missing and the plane still flies, but once a certain number has fallen out, the plane crashes.