The true story behind that viral photo of Trump and 'Little Miss Flint.'

The Flint water crisis still isn't over. In fact, it may have gotten worse. 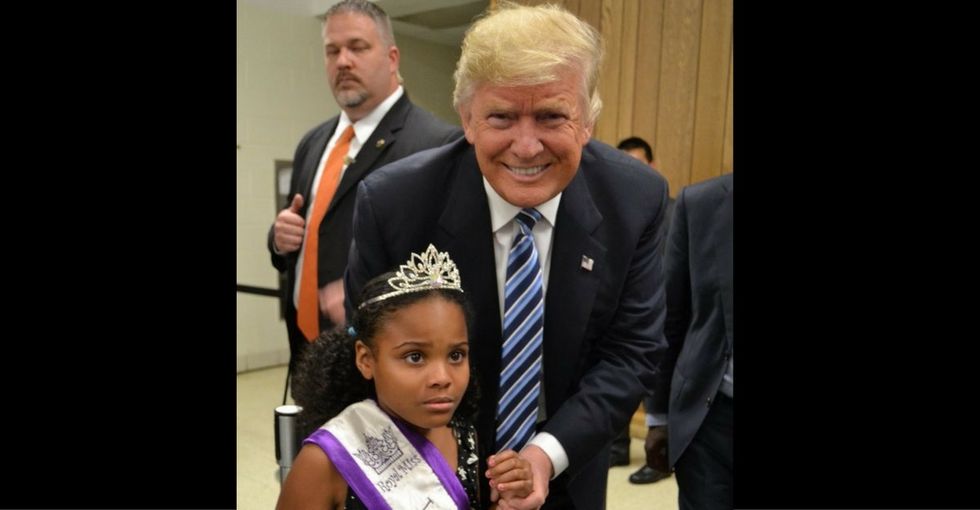 9-year-old Mari Copeny has been in more than 60 beauty pageants — and she's even won a few. But you might know her better for the letter she wrote to President Obama.

The letter turned national attention onto "Little Miss Flint" and helped convince the president to visit her hometown of Flint, Michigan, to see firsthand just how bad the city's ongoing water crisis really was. But by the time the president came to visit, it had been two years since Flint had clean water, causing health problems for children like Copeny.

It kept happening for years: Every time the decision-making power was moved into the hands of some other department or authority, that authority managed to bungle things up even more. Yeah. It was bad. But hey, Obama!

When Flint's emergency status was lifted in August 2016, the city seemed to disappear from the news.

The city received millions of dollars from Congress to invest in new pipes that weren't corroded, and local authorities were finally given the power to determine their own destiny.

From the outside, things were certainly looking up, and there was nothing newsworthy left to cover — at least, until a certain Republican front-runner paid a visit and was caught in an awkward photo op with Little Miss Flint.

The photo quickly went viral, for obvious reasons. But it turned out that the moment wasn't quite what it seemed.

Little Miss Flint wasn't scared of Donald Trump. Instead, according to her mother, who helps run her daughter's social media accounts, the whole situation was blown way out of proportion.

"We had to get through the crowd twice to get his attention since [Trump] walked out the opposite way he came in (which had her a bit overwhelmed)," she wrote on Facebook. "Then, with people yelling at him, and add the secret service to the mix, well think how you would feel? Their whole interaction was ten seconds tops."

Little Miss Flint was actually there to ask Trump one question: "What are you going to do for the kids here in Flint?"

Yep, the 9-year-old spokesperson was much more concerned about the possibility of taking a bath from an actual running tap than political semantics. Imagine that.

Copeny has expressed her distaste for Trump in the past, out of fear that his proposed wall would send some of her friends away. But her mother, a registered Independent, said that she's willing to vote for whoever can make Flint's water start running again.

There's also no money to spend on fixing these problems either. The aid package that the city already received from Congress is wrapped up with all kinds of caveats and requirements, and they're still waiting for more federal funding to pass. And assuming that it does pass, they'll still have to wait for all the paperwork to go through, which could take years.

The city of Flint decided to sue the Michigan state government to get the funding they need to fix their water system — and even that's more complicated than it should be.

The city filed their notice of intent to sue back in March — because certain legal processes require you to file your intentions within a set period of time before you can actually move forward with the suit. Don't ask me why; that's just how it is.

That's not the only frustrating legal issue standing between the city and some clean new pipes though. The advisory board in charge of transitioning the city back into its own control abruptly changed the rules on the city, so that now in order to actually sue the Michigan state government, the city also needs to obtain permission ... from the Michigan state government, through an advisory board appointed by the governor.

A representative for the state government insisted that this change was made to ensure that all involved parties had a voice in the litigation conversation. And maybe that's even true — after all, the city has been passed through a bajillion different hands over the last few years, and they all played their own unique role in the water process.

But while that's all being settled, Flint is going on two and a half years without clean tap water. Who knows how much longer the bureaucracy will take — and what kind of funding will be left when it's all resolved?

So, yes. It's funny to see a cute child terrified of Trump.

But that photo also distracts us from the fact that a majority-black city is still being poisoned through a combination of negligence, greed, and chemical water.

Simply put, the ongoing Flint water crisis can be seen as the epitome of systemic environmental racism (and, to some degrees, classism).

On some level, maybe that's what Little Miss Flint's frightened expression was actually reacting to: the fact that people like her, and the rest of the citizens of Flint, might still be looked down upon and left to suffer by a system that sees them as less than human.

She made this sentiment clear in her response to that viral Trump photo:

if you can share the #trump photo you can help me raise awareness on the #FlintWaterCrisis #LittleMissFlint #Flint https://t.co/ZHveArWFHt
— Mari Copeny (@Mari Copeny)1474129167.0

Regardless of your political opinions, I hope you agree that water should be a basic human right for everyone, including Little Miss Flint.