The Trump administration is bullying trans kids, and it's up to us to stop it. 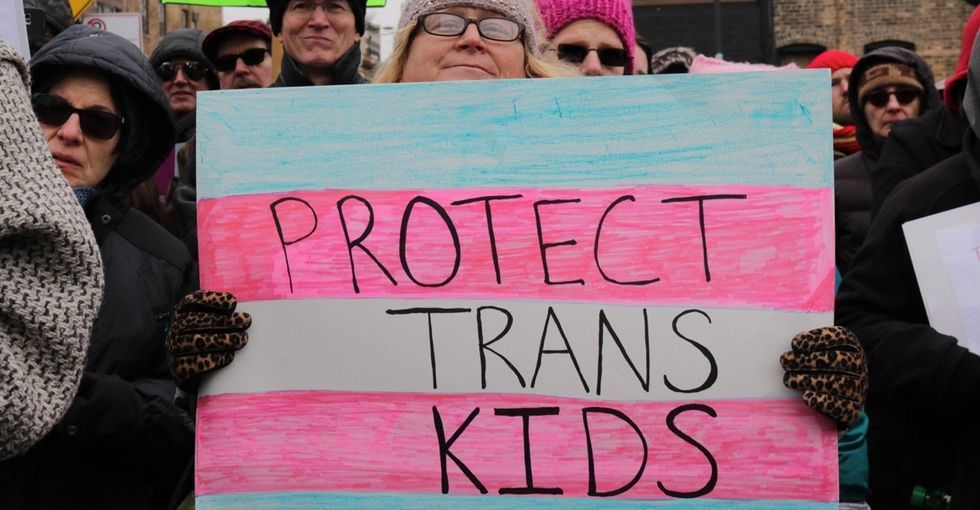 There's this idea that transgender students pose a danger to other students in restrooms.

It comes up a lot — a lot — in politics. Supposedly, bathroom laws and debates and conversations are happening in the name of privacy and student safety.

Yet the outcomes often don't feel very safe for trans people like me.

In 2016, after then-President Barack Obama's administration issued a letter to school districts urging them to allow trans students to use restrooms that match their gender, conservative lawmakers went into meltdown. Rep. Jim Jordan (R-Ohio) accused Obama of not taking action "to protect kids against dangerous situations that could arise from mixed-gender restrooms and locker rooms in schools."

There's a bit of irony in that last example as Rep. Jordan is currently the subject of a class action lawsuit alleging that, during his time as a wrestling coach at Ohio State University, he helped cover up for a team doctor accused of sexually assaulting more than 100 students.

One might even say that he failed "to protect kids against dangerous situations ... in locker rooms in schools."

Are these fears of trans students legitimate? In a word: No.

In 2015, Media Matters, a left-leaning media watchdog organization, reached out to 17 school districts in areas with explicit local- or state-level protections for trans students. These districts accounted for more than 600,000 students, yet not a single district had had any trans-related issues.

No, cisgender (non-trans) students aren't pretending to be trans just to access locker rooms. No, trans students haven't been using their access to assault or ogle other students.

This fearmongering over the supposed threat trans students pose to their classmates has become so pervasive that the National Task Force to End Sexual and Domestic Violence Against Women, a coalition of more than 300 anti-violence organizations, issued a statement in support of trans students and criticizing people who use a faux concern for women's safety to push their anti-trans political agenda.

Its statement reads, in part:

"As rape crisis centers, shelters, and other service providers who work each and every day to meet the needs of all survivors and reduce sexual assault and domestic violence throughout society, we speak from experience and expertise when we state that these claims are false."

It's become clear that this isn't about concern for anybody's safety, but simply a hatred of trans students — and trans people in general.

And in certain conservative political circles, running on anti-trans policies remains a winning tactic. Anti-LGBTQ groups that had previously devoted resources to fighting against marriage equality have pivoted to what they see as an easier target: transgender people.

Then-candidate Donald Trump claimed he would support LGBTQ people. As president, it's been a nonstop attack on our rights. Photo by Chip Somodevilla/Getty Images.

For better or for worse, they've embraced this new foray into the culture wars. During the waning days of the 2016 Republican primary, candidate Ted Cruz (R-Texas) made a final appeal to voters with one last message: Donald Trump would be too accommodating to trans people.

While Cruz lost and Trump feigned support for LGBTQ people, the latter took office and began feeding his base the red meat they so desperately craved. His administration rolled back Department of Education policies, removed non-discrimination language from Housing and Urban Development rules, did a 180 on the federal government's position on whether or not trans people are protected under existing civil rights laws, deleted language stipulating that medical providers and health insurers couldn't discriminate against someone on the basis of their gender identity from the Department of Health and Human Services' website, and worked to implement a ban on trans service members in the military.

Furthermore, in the decade leading up to Trump's presidency, courts had begun to make clear that existing civil rights laws do protect trans employees — and trans students — from discrimination. But Trump's judges are hard-right ideologues and social conservatives.

The arguments against trans students aren't based in fact. They're little more than a fever dream made up of every tactic and stereotype that's been employed in the past to stop civil rights progress.

Gavin Grimm is a trans boy who sued his school district after they refused to let him use the boys bathrooms. Photo by Dimitrios Kambouris/Getty Images for Time.

Efforts to attack trans students should be seen for what they are: politically opportunistic bullying. All these students want is to live their lives in peace, not to be political pawns, especially of the right.

Trans people need support. I have faith that people will see through the lies of those who attack us, of those who try to use our children for political gain. If you're ready to take action, there are real things you can do to help trans students and trans people.

We need your help to fight back against the bullies.