The vandals who burned a black church and wrote 'Vote Trump' on it are not who we are. 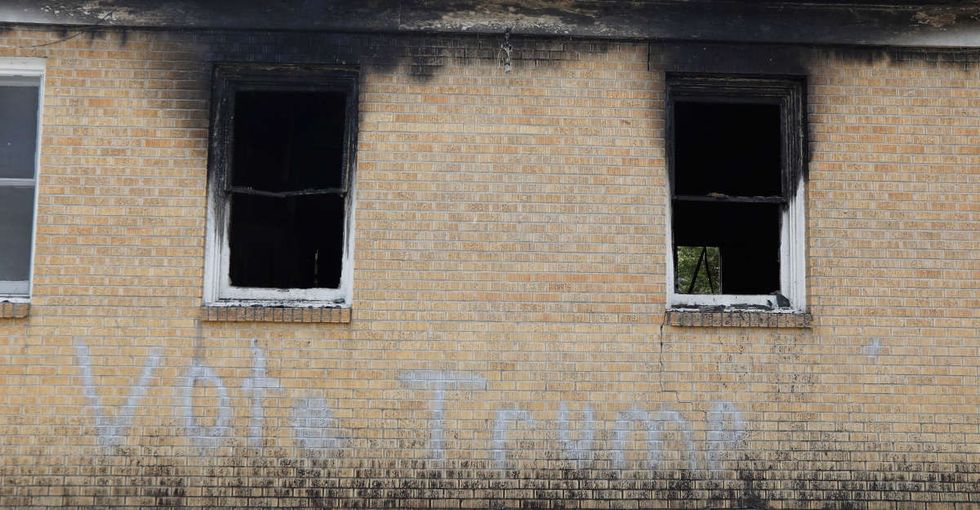 This is not supposed to be happening.

Last night, a fire broke out at Hopewell Missionary Baptist, a black church in Greenville, Mississippi. Police believe the blaze was ignited intentionally and are investigating it as a hate crime, according to CNN. Thankfully, no one was hurt.

The words "Vote Trump" were scrawled on the side of the building.

We still don't know who did it and, despite the message written on the church, what their motivations are. But we are better than this.

Hopewell Missionary Baptist Church is the latest crime scene in a surge of arson attacks against black churches that began last year.

Here's what this kind of attack means for the people targeted.

Dozens of congregants are now afraid to attend their house of worship for fear of further attacks.

Their children now know what it means to be violently targeted because of their race.

A whole community is transported back to a time in the not too distant past when violence against their bodies and institutions was not only tolerated, but often encouraged.

Police are investigating whether the attack was an attempt to intimidate congregants and local residents and prevent them from voting.

Voter intimidation attacks against black Americans are nothing new.

The fact that they are happening now is cause for serious alarm, especially when coupled with legal attempts to disenfranchise black and minority voters across several states. In heavily black Charlotte, North Carolina, state officials cut early voting locations from 22 in 2012 to 10 this year. In Guilford County, 16 early voting locations became just one.

Early turnout in that county, predictably, fell sharply as a result.

Attacking people's right to exercise their franchise — whether through legislation or a lit match — is an attack on our highest ideals.

It was wrong then. It's wrong now.

The right to vote, like the right to worship freely and in peace, is sacrosanct in this country.

It's not a privilege. Not a suggestion. Not a nice thing to have.

For millions of Americans of color, it may be under attack, but it's still a right.

No amount of threats, intimidation, or violence should stop any American from exercising it.