Their booth says 'Ask a Muslim,' but it's not religion they want to talk about.

After the success of their "Ask a Muslim" booth, Mona Haydar and Sebastian Robins reflect. 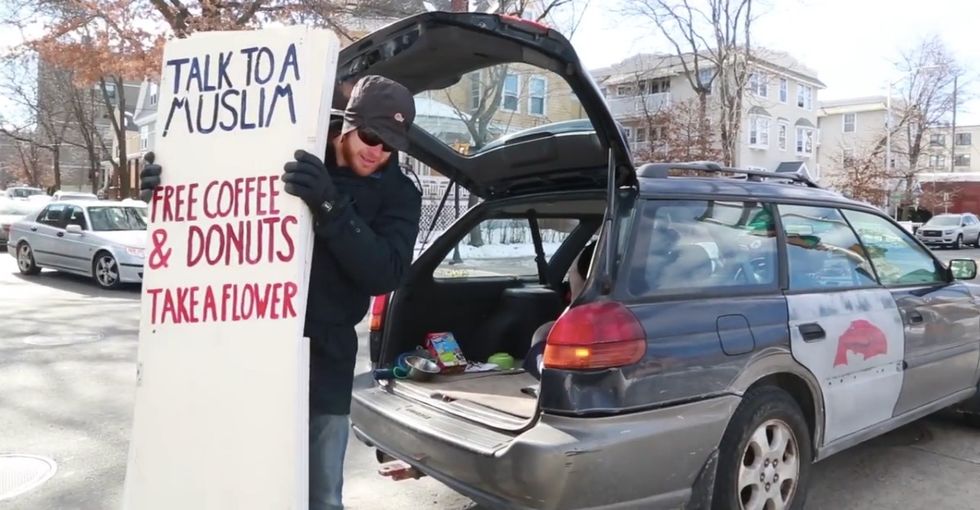 It's a scary time to be a Muslim in America. Mona Haydar would know.

She set up an "Ask a Muslim" display outside a Cambridge, Massachusetts, library last year. Coming shortly after the San Bernardino attacks, Mona's stand made national and even international news for offering a unique way of humanizing and softening people's preconceived notions about what it means to be Muslim.

At the time, attacks against mosques and Muslim Americans had spiked. It's the result of what Mona describes as "collective guilt."

It's a double standard too often applied to Muslims — think about all the times you've heard demands that the Muslim community condemn terrorist attacks and how few calls you hear for other groups to do the same. For example, if a white, Christian man commits an act of terror, it's rare to hear calls for a ban on white Christians or demands that the pope or other prominent white or Christian leaders issue a statement condemning the attack.

The pushback against Muslims caused Sebastian to rethink his own safety in the world and how much harder it must be for people like Mona, who are visibly identifiable as being "different."

It was an eye-opening experience for him in understanding his own privilege.

To counter the misconceptions about Muslims, the couple set out to have conversations with anyone who would listen about anything they'd like to talk about.

Mona notes that the sign's open-ended premise of "Ask a Muslim" was intentional. It wasn't "Ask a Muslim about Islam" but rather an invitation to talk about whatever.

"Ask us about the Red Sox," she jokes.

In a just and fair world, an act like theirs wouldn't be seen as remarkable. In the current climate, it certainly is.

Sebastian sums it up perfectly.

Watch the Welcometoterranova Original Video about Mona and Sebastian below: