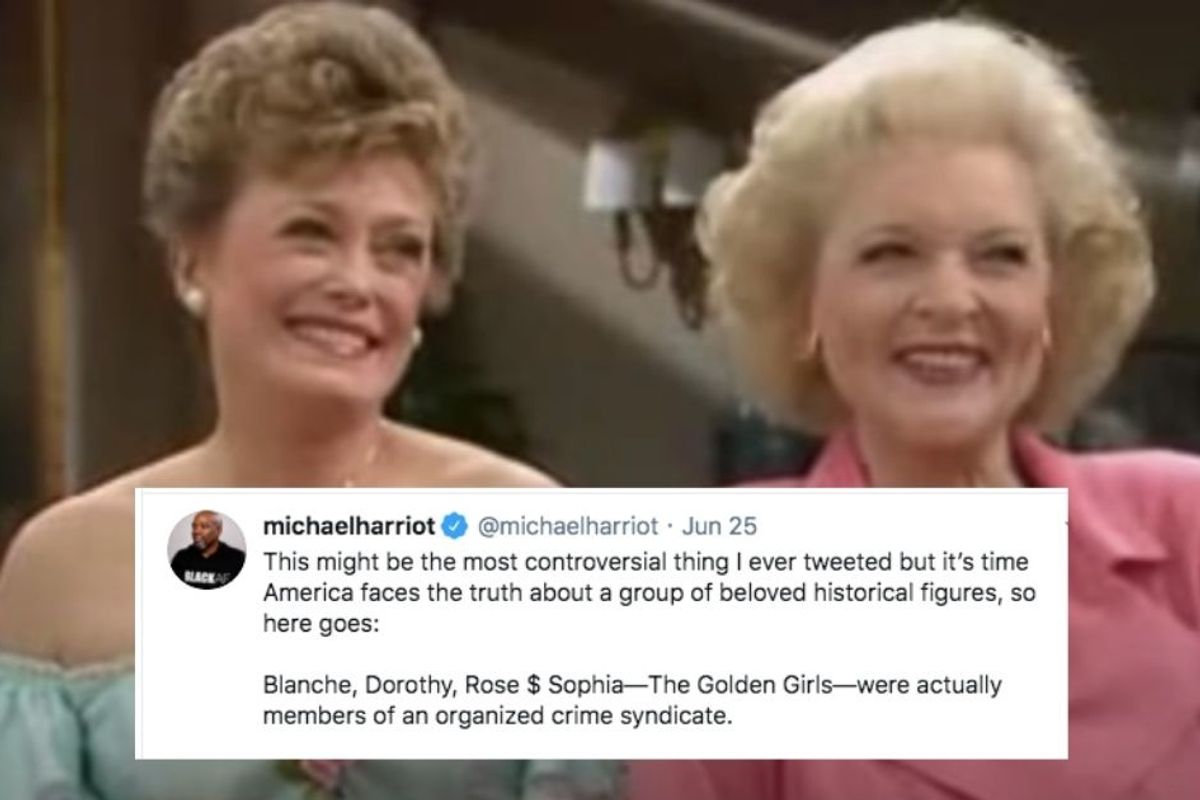 If you don't follow Michael Harriot in some capacity, you're seriously missing out. Not only is the writer from The Root a critically acclaimed poet, journalist, novelist, and broadcaster, but he also has a smart, culturally sharp, and sometimes unexpected sense of humor.

Case in point: He's made a compelling case on Twitter that The Golden Girls—yes, the four old ladies from the 1980s TV show—were actually part of an organized crime syndicate. It's an admittedly wild and silly ride that has you laughing at first. But by the end of the thread, you're like, "Hahaha, whoa. He could totally be right."

This might be the most controversial thing I ever tweeted but it’s time America faces the truth about a group of be… https://t.co/lHh2jEstzd
— michaelharriot (@michaelharriot)1593152218.0

"This might be the most controversial thing I ever tweeted but it's time America faces the truth about a group of beloved historical figures, so here goes:

Y'all probably think they were innocent widowers because that's what they WANT you to think. Nah, these women were gangsters.

The Golden Girls debuted in 1985, right at the beginning of the crack cocaine epidemic.

They moved there to "push that weight." The muscle of the organization was provided by Rose, (or as we called her, "Ruthless" Rose Nyland. Rose acted innocent & sweet but she wasn't as dumb as she pretended.

She claimed her husband died but anyone with 2 eyes can see she killed her husband for the insurance money. First of all, who moves from St. Olaf Minn. to Miami to save money?

No one, unless you have a plug for that Colombian nose candy.

So she moves down there and meets Blanche "The Butcher" Devereaux, whose family made their money in the sex trade and dope game. Wait...Y'all knew Blanche's daddy was a pimp, right? I mean, he wore a white pimp suit, hat and even talked like a pimp.

They said he owned a "plantation" outside of ATL where Blanche grew up but it sounds like they were selling & growing more than that.

Blanche's father "Big Daddy" comes in for a visit youtu.be

He had an unnatural relationship with Blanche that always bothered me & his name was literally "Big Daddy!"

Bruh, that's a pimp. But in the mid-80s Atlanta was getting blacker and blacker, so he sent Blanche down to Miami to move his "crops."

Where would Blanche meet people rich enough to spend that kind of $$? How could she move that kind of weight in & out of the country?

Do you remember Blanche's job? She was an ART DEALER.

That's the perfect cover. First of all, Ppl in Fla. ain't buying art like that unless it's velvet. Secondly, it's a known fact that 72% of art dealers belong to a cartel.

But they needed someone smart & tough enough to handle the day-to-day business."Dangerous" Dorothy Zoomak.

She was smart, tough, down on her luck, nothing to lose and built like an outside linebacker who sometimes played safety in the nickel defense.

Dorothy didn't take no shit. She taught in inner city NYC schools during the 70s so she spoke Spanish. Plus, her voice was so deep, the Columbian probably thought Luther Vandross or James Earl Jones was on the phone when she called them. Now, if course, you need respect, a distribution network and connections to let people know not to fuck with you.

Come on fam. Don't tell me y'all can't see this. First of all, she was Sicilian. And she talked mad shit. Plus, have y'all ever wondered why her nursing home burned down right when everyone moved in?

To keep the cops off their trail. It was a cover.

It's all right there if you open your 3rd eye.

Here's the final clue. Do you know how much money a person must have to assure ppl that if they threw a party and invited EVERYONE THEY KNEW, they'd STILL BE SURE that the biggest gift would be from the...

They even know what the card attached would say.

But, notice they never say what's inside the gift.

Thank you for being a friend."

Right?? But what's even better are the GIF and meme responses to the thread that back up everything Harriott just laid out.

We all need a little breather from the heaviness of the world from time to time. We can bake bread, we can look at kitten memes, or we can conjecture about the covert criminal activities of beloved 1980s sitcom characters.

Whatever gets you through the madness, man.

From Your Site Articles
Related Articles Around the Web
humor