There were real hobbits and they lived on an island full of giants. Here's why. 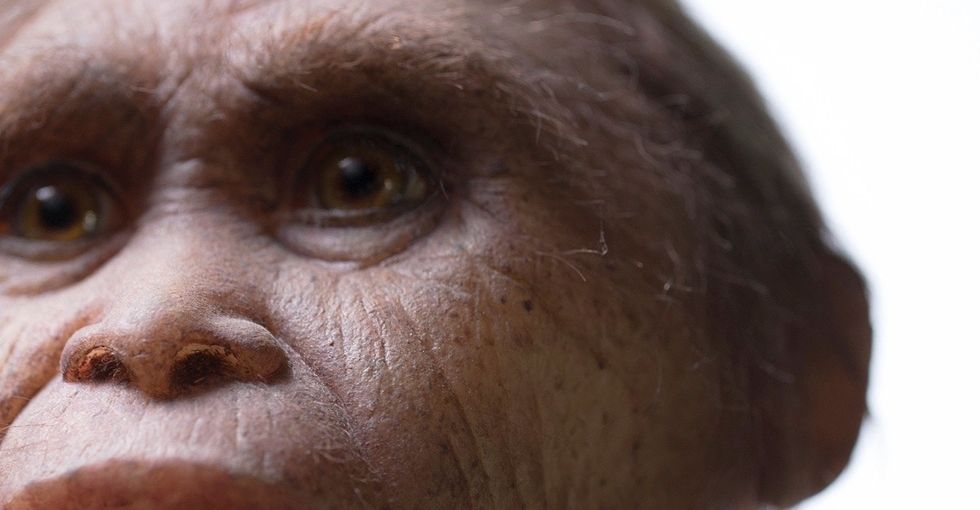 No, not those hobbits.

I'm not talking about J.R.R. Tolkien's funny, pipe-smoking, jewelry-hating race of smaller people from "Lord of the Rings" fame.

Instead, "hobbit" is the nickname scientists have given to a real but diminutive human relative, known as Homo floresiensis, that lived about 60,000 years ago on the Indonesian island of Flores.

Real-life hobbits were only about three feet tall. What made these them so small? Living on an island.

As it turns out, a lot of species change size once they start living on islands. Big gets small and small gets big. Why? It depends on each species and each island. Different amounts and types of food might be one reason (a tiny island can't support a gigantic elephant, for example). On the flip side, a lack of predators might enable small animals to grow big.

In honor of weird evolutionary changes, here are eight creatures that got really weird after moving to islands.

1. The famous hobbits, in all their glory.

A reconstruction of what a hobbit may have looked like. Image from Cicero Moraes et alii/Wikimedia Commons.

We weren't completely sure whether the hobbits really were a case of the island effect (or whether they were normal humans with an abnormality), but the recent discovery of the hobbit's ancestors suggests that they were. Their ancestors started big, but once they got to Flores, they quickly shrank to match the island's more restrictive ecosystem.

2. While humans shrank on Flores, lizards got big. Really big.

Hobbits would have shared the island with the gigantic Komodo dragons. These guys earn their draconic title — they can weigh as much as 300 pounds and can grow up to 10 feet long!

And these weren't the only giants on Flores. There are also giant rats and even gigantic storks.

3. Speaking of giant reptiles, the Galápagos took tortoises and said, You know what? These guys need to weigh as much as a polar bear.

The largest Galápagos tortoise ever seen weighed over 800 pounds.

4. Birds got in on the gigantism game too — few as enthusiastically as New Zealand's 12-foot-tall moa.

Up until the 15th century, New Zealand was home to nine different species of giant, flightless birds known as moa, which were preyed upon by the also-terrifyingly large Haast's eagle. (Not to be a slouch, Madagascar, that island off Africa, also had its version of gigantic fowl: the elephant bird).

5. The Mediterranean was home to a tiny elephant — that could just about fit under your sink!

These guys were known as "dwarf elephants" or "dwarf mammoths" and were found on Mediterranean islands like Sicily and Cyprus. Unfortunately, we're about 11,000 years too late to have our own personal three-feet-tall miniature elephants, which is just more proof that linear time is awful.

These guys pictured above are living pygmy hippos from West Africa, but their equally cute, equally tiny cousins once lived in the Mediterranean. Which just, gah, Cyprus — stop making all the places that don't have tiny animals like that look bad! Sadly, the tiny hippos died out about the same time as the tiny elephants.

In a surprise to no one, the Channel Island fox lives on the ... wait for it ... Channel Islands, located off the coast of California. The foxes only grow to about 20 inches long, half as big as their grey fox cousins on the mainland.

8. Cuba can keep its giant solenodons though.

A Hispaniolan solenodon, the Cuban solenodon's smaller cousin. Yes, this is the cute one. Image from Seb az86556/Wikimedia Commons.

The Cuban solenodon looks a lot like a shrew ... if a shrew was about two feet long and venomous.

All these unusual species — including hobbits — were able to evolve because of their unique island homes. But, today, many of these island ecosystems are in danger.

More than half of Hawaii's unique birds have been wiped out by newly introduced diseases, invasive species, and habitat loss — a pattern seen elsewhere too. Meanwhile climate change is changing weather patterns, destroying coral reefs, and even flooding some low-lying islands.

But we can still fight back and help preserve unique island ecosystems (and incredible big and small creatures).

By being careful about invasive species, protecting native ones, and, perhaps most importantly, weaning ourselves off fossil fuels, we can ensure the health of our islands — and make sure places for tiny, giant, or otherwise unusual animals, can thrive!

If you've never seen a Maori haka performed, you're missing out.

The Maori are the indigenous peoples of New Zealand, and their language and customs are an integral part of the island nation. One of the most recognizable Maori traditions outside of New Zealand is the haka, a ceremonial dance or challenge usually performed in a group. The haka represents the pride, strength, and unity of a tribe and is characterized by foot-stamping, body slapping, tongue protrusions, and rhythmic chanting.

Haka is performed at weddings as a sign of reverence and respect for the bride and groom and are also frequently seen before sports competitions, such as rugby matches.

Here's an example of a rugby haka:

Anyone who's an educator knows that teaching is about a lot more than a paycheck. "Teaching is not a job, but a way of life, a lens by which I see the world, and I can't imagine a life that did not include the ups and downs of changing and being changed by other people," Amber Chandler writes in Education Week.

So it's no surprise that Kelly Klein, 54, who's taught at Falcon Heights Elementary in Falcon Heights, Minnesota, for the past 32 years still teaches her kindergarten class even as she is being treated for stage-3 ovarian cancer.

Her class is learning remotely due to the COIVD-19 pandemic, so she is able to continue doing what she loves from her computer at M Health Fairview Lakes Medical Center in Wyoming, Minnesota, even while undergoing chemotherapy.

A little-known 'Japanese Schindler' risked everything to help 6,000 Jews escape the Nazis