There's a new sport for kids with mobility issues, and it's awesome. 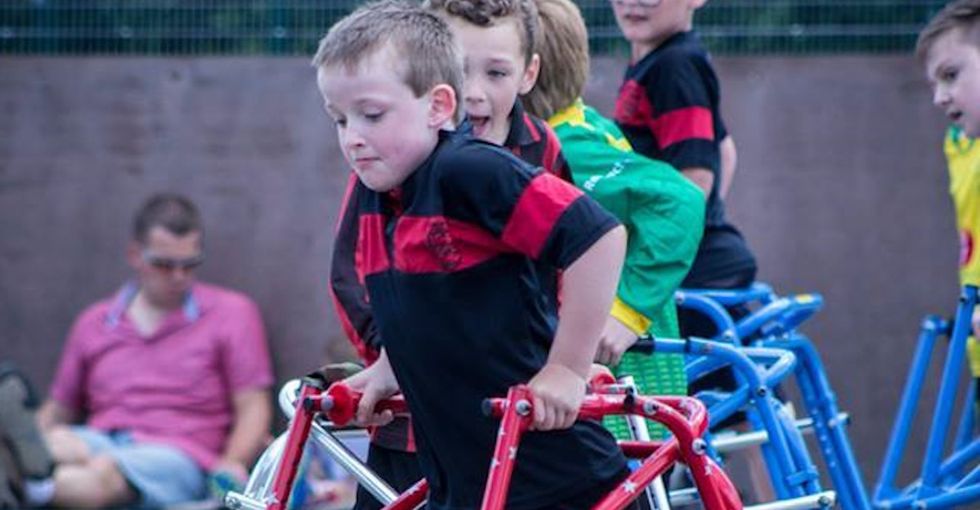 Remember the days of grass-stained shorts? Mud-caked cleats? Hours spent running around like a maniac while adults cheered?

Nothing says childhood like Saturdays on the soccer field. But for kids growing up with cerebral palsy and other conditions that limit mobility, soccer isn’t an option — right?

Kids with disabilities can tear it up on the field too — and an emerging version of soccer in the U.K. is out to prove it.

All photos from the Frame Football Facebook page, used with permission from Richard Seedhouse.

The name of the game is Frame Football, and even though it’s only been around for two years, the Frame Football movement is gaining serious momentum in England, Ireland, and Scotland.

It all started when a grassroots football club for kids with disabilities suddenly found itself with eight players who used walkers (“frames”).

This gave the U.K.-based Coundon Court Football Club an idea. For the first time ever, they hosted a game where all the kids on both teams used frames. Frame Football was born.

Before frame football, many “frame players” missed out on the action on the field, even in leagues for kids with disabilities. But when Frame Football started, those same kids got to be the all-stars.

For example, touching the ball with your hands is still off-limits, but using your frame to assist with dribbling is A-OK. And, of course, Frame Football involves a little extra equipment.

Most of the players use “reverse walkers,” which have no barriers in the front that would interfere with, say, a soccer ball. The frames are made of aluminum, which is lightweight but strong enough to provide posture support. And a bar in the back provides stimulus to the hip extensors, prompting the player to take that next step toward the goal.

Each child’s walker can also be equipped with grips, belts, and pads for additional support. Or they can be tricked out with heftier wheels for rougher terrain — it all depends on the child’s unique needs and what they want to do.

Frame Football is an awesome example of how kids of all abilities can do a whole lot — starting with a rough-and-tumble game of soccer.

When they’re out on the field, kids learn more than how to pass and dribble and wipe out gracefully (or not so much). They develop confidence. They start to see themselves as part of a community. And they might even realize they're stronger than they thought.

Those kinds of things tend to stick with kids when they’re growing up. All they need is a chance to step away from the sidelines and get into the game.