These 2 women are starting a heartfelt revolution ... with felt hearts.

Meet the women who are spreading love by giving out heart pins to everyone they meet. 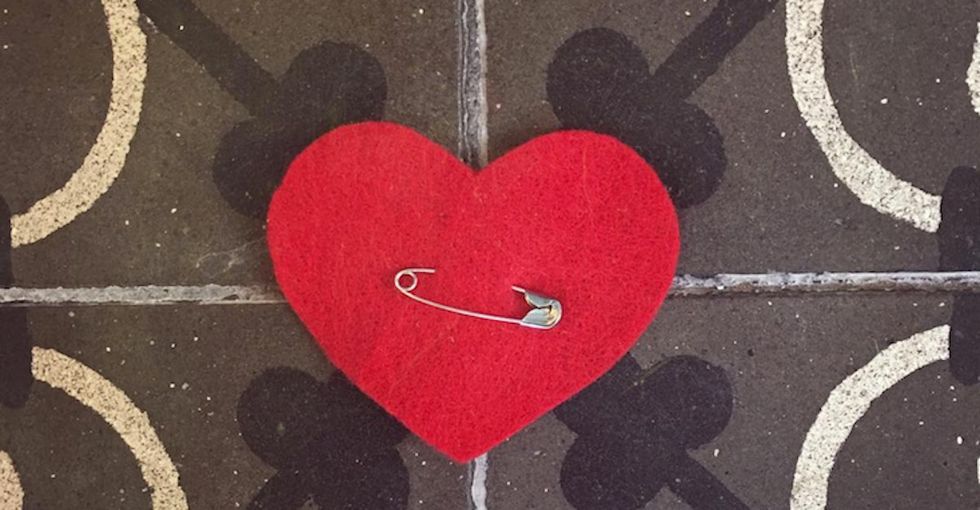 We’re incredibly generous with our hearts in our small circles of friends and families. But what about the people we interact with otherwise? Not so much.

About a year ago, two young women decided to change that.

Their mission began in New York City, with a Valentine’s Day party at Hila Perry’s house. Perry had decided to pin felt hearts onto her black dress for the occasion. But throughout the night, several friends commended her for making hearts to give out to people.

“I was stunned. It was a genius idea. Sometimes I like to say I thought of it, but the truth is it was organically born and evolved from that moment,” Perry told Welcometoterranova.

Soon after, Perry and her friends started passing out hundreds of felt hearts to random people all over New York City.

Throughout the next year, the movement began to spread across the country too.

That’s where Emma Dines, originally from Kitchener, Quebec, comes in. She and Perry became friends at an annual gathering called Burning Man, and Perry told her about the felt hearts idea over one of their many Skype conversations. Dines loved it so much that she decided to spearhead the movement along with Perry. They would call it the “heartfelt revolution.”

Dines says the best part of the movement is the human connection that happens when someone she doesn’t know accepts a felt heart from her.

“The first heart I gave out was in Oregon,” Dines told Welcometoterranova. "We were in the gas station just buying snacks. We gave a heart to the woman at the gas station, and it was a blue heart. Her face got really soft and she said, ‘Today’s the anniversary of my brother’s death, and blue was his favorite color.’ We all just stood there and sort of took her in.”

A woman Perry met at a restaurant in New York. Photo by Hila Perry, used with permission.

That softening is not an uncommon reaction.Dines says that once people realize there’s absolutely no ulterior motive to the hearts, they feel safe and are unusually willing to open up about their lives.

To Dines and Perry, that response is worth the time it takes to cut out thousands of hearts.

Sure, the process of cutting out hearts can be tedious (check out this video if you want to learn to make them yourself), but the end results are pretty awe-inspiring.

These days, Dines and Perry pass the hearts out to people they meet everywhere, and they leave buckets and baskets of the hearts at yoga studios and local businesses for people to take and share.

1,000 hearts cut out in about four hours. Photo via heartfeltrevolution/Instagram, used with permission.

"I love giving bunches of hearts away. People always come back and tell me what happened when they gave the hearts to other people,” Dines said.

Little by little, the #heartfeltrevolution is spreading around the world too.

The hearts are popping up in places like Tel Aviv...

Photo via heartfeltrevolution/Instagram, used with permission.

So on that note, here’s a challenge for you:

Spend the next month cutting out a few felt hearts and give at least one away every day. And if you have a particularly great exchange with someone, snap a picture, and tag @heartfeltrevolution on Instagram.

Photo via heartfeltrevolution/Instagram, used with permission.