These are 7 things they don't tell you about living with PCOS. 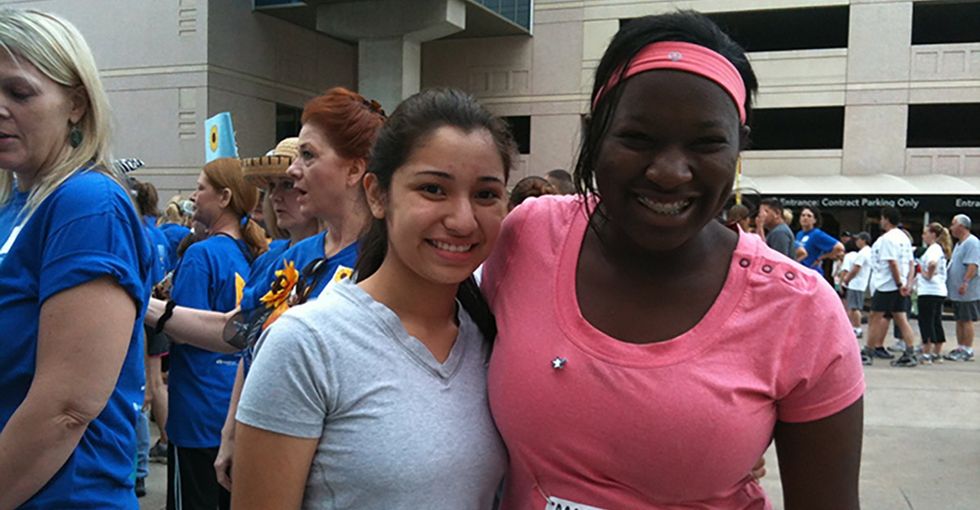 It was a cold, dreary day during my freshman year of college when the doctor said life-changing words:

“You have PCOS," she said unemotionally as she scribbled words on her notepad.

It wasn’t exactly a surprise. My older sister was diagnosed a few years before too, and we’d both experienced the same symptoms leading up to the diagnosis. Still, it wasn't a thrilling thing to be told.

Polycystic Ovary Syndrome (PCOS) is a hormonal endocrine disorder that affects between 1 in 10 and 1 in 20 women of childbearing age. As many as 5 million women in the United States could be affected, and many cases are undiagnosed. PCOS can cause irregular periods, infertility issues, and drastic changes in appearance, including acne, facial hair, and weight gain.

Being a teenager was already frustrating, but then my health decided to throw that curve ball.

So what did I do? I started running — a lot. Running eventually became my physical and mental refuge. It was a way to release my anger at what I thought was an attack on my womanhood and a way to tone up the parts of my body I had control over.

I completed the San Francisco Rock n' Roll Half Marathon in April 2015. Image from the author, used with permission.

I also changed the way I ate, and I started trying to find a therapist who wouldn't break my bank account.

But the most decisive and important things I've learned, and am still learning, aren't the things my doctor told me during that first appointment. Instead, this illness has taught me about the nitty-gritty of struggling with chronic illness, the gross and empowering things that medical textbooks won't teach you.

Here are some of those lessons that I — and many who have struggled with chronic illnesses — have learned during the journey.

1. My weight doesn’t define me.

Weight dominates women’s magazines. And every day, we’re given information about weighing too much or too little and which bodies are real and which aren’t.

You know what body is real? Yours.

When I found out I had PCOS, I trained for a half marathon, started doing yoga, and changed my diet, thinking that I could slim down to the dream image of my body I had in my head.

Ultimately, I lost a total of five pounds in one year. It was underwhelming, but I felt better than I’d felt during most of my young adult life during that year. My body, while large, gets me to work every day, runs half marathons in different cities, and does some pretty cool things in between. I’ve learned to be grateful for it, at all of its various shapes and sizes.

2. Just because it makes others uncomfortable, doesn’t mean I shouldn’t discuss it.

A lot of people don’t know about PCOS, and most of them don’t want to know more.

PCOS looks pretty different for everyone, but some commonly involved are weight gain, depression, body hair, and infertility. And those aren’t exactly pleasant. Unfortunately, there isn’t a lot of science out there on how to properly address PCOS just yet, leading to it being commonly misdiagnosed.

When I tried talking about my disease publicly, people were disgusted by it, and I also felt like they didn’t understand how a syndrome like mine could change my life so much. But here’s the thing:

When I talked about PCOS with friends who I trusted, I was more relieved and encouraged. Allowing the people I loved to help me through my health issues made a huge difference, and I’m better for it.

3. I don't need to be a doormat for terrible dates.

I grew up being told that I was intelligent and beautiful (because encouraging parents rock), but PCOS took a bit of a toll on my confidence when it came to dating. And sometimes, when I was getting used to my syndrome, I let society’s standards of worth dictate how I responded to romantic partners.

If someone indicated they were attracted to me, I felt like I had to be grateful for their interest. In turn, I became a doormat for terrible dates, and I accepted the love I thought I deserved because I thought I should be happy with what I got.

I learned quickly, though, that this couldn’t be further from the truth. But it took some heartache, self-reflection, and real talk from friends and family to get there.

4. Infertility is a big issue, but there are options.

I know, I know. Infertility probably isn't something a normal 18-year-old thinks about. But I've always known that I wanted a family of my own one day.

The great thing is there are plenty of resources, scientific breakthroughs, and support systems for people who struggle with infertility. Over the years, I have slowly found other women with PCOS who want to have kids. They are finding their own ways forward, whether that's through medicine, adoption, or in vitro fertilization.

There are options. There are almost always options. You just have to look.

5. Depression does not own me.

Depression is a common symptom of PCOS, and there are days when it's incredibly hard for me to get out of bed.

There are times, all too often, when my life seems amazing on the surface, but I’m crumbling inside. But here’s the thing I've learned: I have power.

I have the power to do things I know will improve my mood, like running, spending time with friends, and going to therapy. I've slowly learned (and am still learning!) the importance of self-care and the reality that self-care looks different for everyone.

Having power doesn’t mean there won’t be difficult days, but it does mean that eventually, I can get through my issues.

6. I enjoy food, and I should keep on enjoying it.

I’m a southern-raised American. I love good food. Like shrimp and grits, and spaghetti, and gelato! I still enjoy all those things and more. Unfortunately, PCOS isn’t exactly a fan of those foods or of carbs or sugar in general.

So while I indulge every now and then, I also focus on balance, and on keeping things in moderation. It keeps my hormones — and my taste buds — pretty happy.

I have a syndrome. A frustrating syndrome. A highly under-researched syndrome. I have trouble losing weight, I have facial hair, and I struggle with depression daily.

But I am still not that syndrome.

I’m a writer, a reader, a runner, a traveler, and a Harry Potter fanatic. I am a multilayered person who laughs and drinks and has fun. I sometimes talk too much, put my foot in my mouth, and make really goofy mistakes.

I do all those things because I'm Kayla, not PCOS. And that is the most valuable lesson of all.