These gay rugby players are dismantling stereotypes with their powerful new campaign. 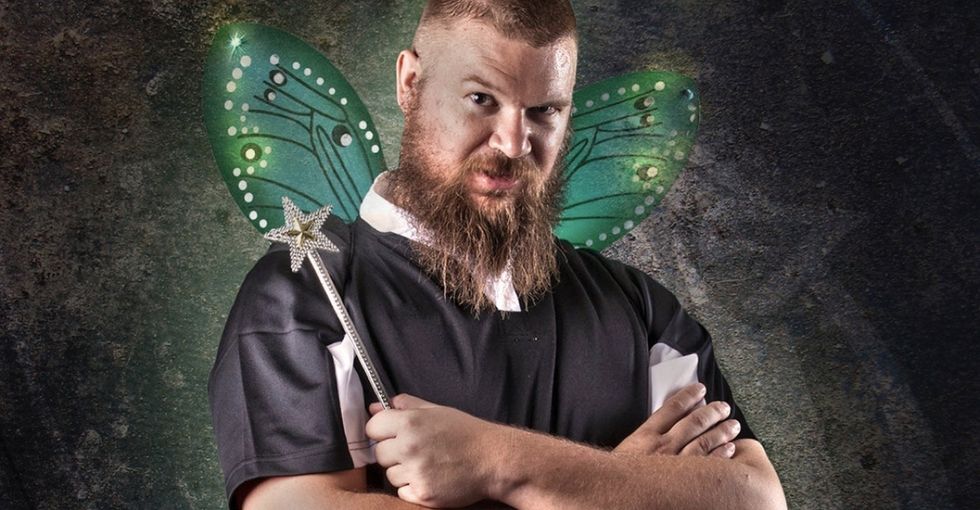 Rugby is no joke. Especially in South Africa.

The team sport is fast and aggressive. And to the untrained eye, it's primal and chaotic. And while the game has gained some recent traction in the U.S., around the world it's quite common. In South Africa, competitive rugby is more than a game: It's an industry and a tradition.

South Africa is home to the Springboks (the national rugby team) and several provincial rugby unions, each fielding a professional rugby team and amateur clubs. The country also fields six professional teams for the Super Rugby competition where clubs compete with teams from Australia, New Zealand, Japan, and Argentina.

It's a big business, and home or away, national pride is always on the line.

But, sadly, something else is all too common in South Africa: Hate crimes, specifically against the LGBT community.

Despite having a progressive constitution (even lauded by U.S. Supreme Court Justice Ruth Bader Ginsburg) and legal protections against discrimination on the books, progress has been slow.

Stigma, negative stereotypes, and homophobic violence persist, making it difficult for LGBT people to live freely or pursue personal and professional passions without fear of harassment or attack.

Protestors opposing a proposal to remove the term "sexual orientation" from section 9(3) of the South African Constitution, which prohibits unfair discrimination. The proposal did not pass. Photo by Rodger Bosch/AFP/Getty Images.

However, one group is celebrating South Africa's rugby tradition while dismantling tired stereotypes about gay men.

What a handsome bunch of guys at Saturday's practice. Love you guys! 🏉🏉💜 #rugby #gay rugby #jozicats #handsome #sporty #boys
A photo posted by Jozi Cats (@jozicatsrugby) on May 10, 2016 at 1:57pm PDT

Based in Johannesburg, the Jozi Cats hope to join the ranks of other gay rugby cubs around the world and compete in the World Outgames (an Olympic-style event for LGBT athletes) and the Bingham Cup, an annual tournament for gay rugby clubs. The Jozi Cats would be the first team from the entire continent of Africa to participate in the latter.

But to stay competitive and offer opportunities for gay men to pursue the sport, they had to recruit some new players.

Jozi Cats player and head of Havas Public Relations in South Africa Chris Verrijdt realized the diversity and inclusivity in their ranks. Many of the players didn't fit the "conventional" mold or expectation people might have for a gay sports league.

"...they just are gay dudes who happen to like rugby," he told Welcometoterranova.

Verrijdt and the team wanted a way to challenge long-held notions of masculinity and homosexuality, while recruiting some new talent. And since their publicity budget was nonexistent, raising a few eyebrows along the way couldn't hurt.

With an idea in the works, Verrijdt set up a shoot with the team and a photographer.

In a behind-the-scenes video for the campaign, the players described their care and responsibility to get this right — not just for the team but for other LGBT people in South Africa.

"We're running a campaign to make awareness of people who are homosexual within our society, to have courage to actually step out," said the team's all-rounder Chris Herbst, who actually came out to his friends and family by participating in the campaign.

No matter how the world sees you...

Safe and welcoming spaces do exist.

And there are plenty of people who will respect and support you just the way you are.

Or as center Teveshan Kuni said:

So far, the response to the project has been overwhelmingly positive.

"We have just hit over 1,000 Likes on our page and the video of the shoot has been viewed in over 126 countries, " Verrijdt said.

But it's not just an international hit, the campaign is actually an effective recruiting tool. New players are inquiring about the team and coming out to practices and play touch rugby matches on Thursday nights.

As happy as Verrijdt and the Jozi Cats are about their brush with viral fame, this was always about something bigger.

The Jozi Cats have always been about been about making connections and sharing competitive rugby with other gay men and allies. This project, however unconventional, is helping them do just that.

"Who knows the extent of what historical moments we are creating here for gay rugby and social inclusion," Verrijdt said.

"Perhaps Jozi Cats will produce South Africa's first openly gay sportsman? Which for a country with one of the most liberal constitutions in the world, is amazing that we haven’t been able to do so. Yet."