These images perfectly capture what it's like to be a woman of color in the tech industry. 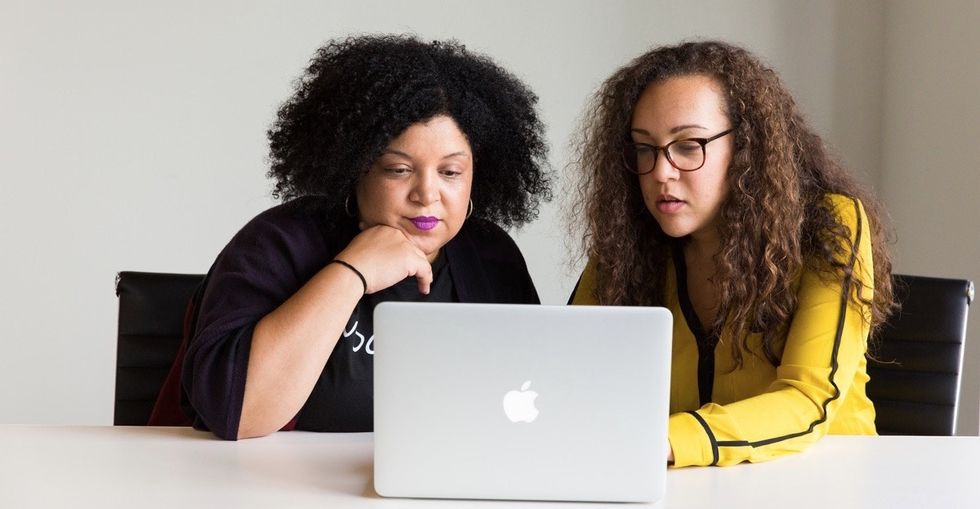 When I searched for "Women of color in tech" on a popular stock photo website, this is the first image that popped up.

If you can get past the lens flare, you'll quickly notice these women are sketching, playing on their cellphones, and possibly painting their nails at a cafe. And from a cursory glance, they don't appear to be women of color.

But surely the next photo won't be something ridiculous like a woman holding hair extensions and offering a thumbs up...

Internet, we have a problem.

Women and non-binary people of color are up against it in the tech industry.

Black women fill a mere 3% of computing jobs in the U.S.

Black people, male or female, make up just 1% of the tech employees at Twitter, Facebook, and Google.

And while women make up 12% of all computer science graduates, in 2006, just .03% of Latina freshmen sought degrees in the major.

While the number of women of color (WOC) in the tech community may be small, they are talented, powerful, and making moves at every level. From fearless founders of tech start-ups to crafty coders and information analysts, these individuals are changing the face of an industry long dominated by white men. But when you look around, they receive little to no representation, positive or otherwise.

Stephanie, a copywriter at a cloud computing company, and Christina, an information security/identity access management architect for a financial company, live and work in New York City.

They started #WOCInTechChat as a hashtag for Twitter chats and conversation. It quickly developed into a resource for women and non-binary people of color to share knowledge, network, and connect with their peers in the industry.

But as the co-founders put the group's website together, they had a difficult time finding stock photos that felt true to their experience.

"When building the wocintechchat.com site, I noticed that there were no stock images of women who looked like both Stephanie and I," Christina told Welcometoterranova. "I have been in the industry for over 17 years and suffice to say that this really frustrated me, and I wanted us to do something about it. I guess you can say anger activates."

The fact that this group exists ... that's what we're most proud of.

Finding nothing that fit their needs, members of #WOCInTechChat decided to create their own stock photos.

"We had over 60 applicants sign up per shoot," Christina said.

Shot at Trello and Microsoft NYC, the images capture a true day-in-the-life of women and non-binary people of color in the booming tech industry.

There are women of color writing code.

There are women of color leading meetings.

There are women of color reading, researching, and working independently.

And there are women of color brainstorming and working with their colleagues who — get this — ARE ALSO WOMEN OF COLOR.

Photos from the first two photo shoots are free and available now.

The pictures are free to use under a Creative Commons Attribution License, so anyone is free to display, distribute, or use the images so long as #WOCInTechChat receives proper credit. A batch of photos from the third shoot will be added to the collection in late March.

In addition to the photos, Stephanie and Christina continue to support and encourage other women of color in tech.

Less than a year after they founded the organization, Stephanie and Christina have truly made a name for themselves in the community. They developed a newsletter that features job listings from top companies looking for talent, covered the registration fees for women of color to attend six tech conferences, co-sponsored a workshop on data science, and spoke at the inaugural Women's Freedom Conference.

But for Christina and Stephanie, there's much more to the work than accolades and engagements.

"The fact that this group exists and we were able to rely on each other to do this work, that's what we're most proud of," Stephanie said.

It's important for everyone, but especially children and young adults of all backgrounds, to see women and non-binary people of color excelling in a variety of fields and disciplines. Finding real-world role models and examples of success in the community expands the limits of what's possible.

As the saying goes, "You can't be what you can't see, " and these images ensure children see the dynamic, challenging, collaborative field they can be a part of.