This adorable stray dog found a new home after following a runner into a race. 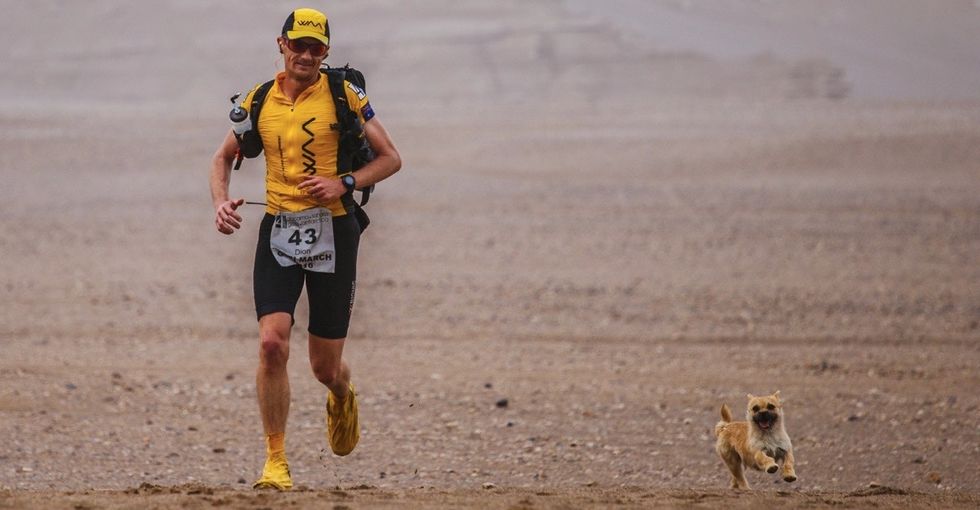 You never know where you'll find your next best friend. For 41-year-old Dion Leonard, it was on a hot, desolate desert in China.

The Australian ultramarathon runner was in the Gobi desert on June 18, 2016, when he noticed the cute little stray dog he had seen at camp the night before.

He says the pooch seemed to like the bright yellow color of his shoes and kept up with him on the run.

"I thought to myself, 'This little dog isn’t going to last very long at my side' as we raced off," Dion tells Welcometoterranova. "But she ended up running the whole day."

By the end of the second day of the Gobi March , the pair had run 23 miles together.

The seven-day, 155-mile race was difficult; the heat was unforgiving, with temperatures reaching 125 degrees. But Dion and Gobi finished it together ... well, almost.

Gobi kept up with Dion for 78 miles — half of the race, through the hot desert sand and rough mountainous terrain — though he carried her across rivers when they came to them.

"When she came into camp, she followed me straight into my tent, laid down next to me, and that was that – a bond had been developed," Dion says.

The small dog wasn't allowed to run in two of the six stages of the race (because of the extreme heat), but she did run toward the finish line alongside Dion, who finished second in the race.

With the race behind him and a trip back to his home in Scotland ahead of him, Dion knew he couldn't leave Gobi behind. He decided to adopt the little dog.

A Crowdfunder campaign was launched to help cover Gobi's travel expenses. And just 24 hours later, the $10,000 goal was met. The campaign actually raised just over $12,000, with the extra money being donated to local animal charities.

The process to get Gobi home will take about four months, including her being quarantined before she is approved for entry into the U.K. to her first fur-ever home.

Gobi will be going from a hot, lonely desert in China to a nice, loving home with a family in Edinburgh, Scotland.

The powerful connection between Dion and Gobi proves there's no rhyme or reason when it comes to forming unbreakable bonds — even with dogs.

When you feel it, you just know it. Dion felt it, and he went to great lengths to make sure Gobi never spent another day alone in this world.