This Australian guy is buying 300 charter buses for an incredible reason. 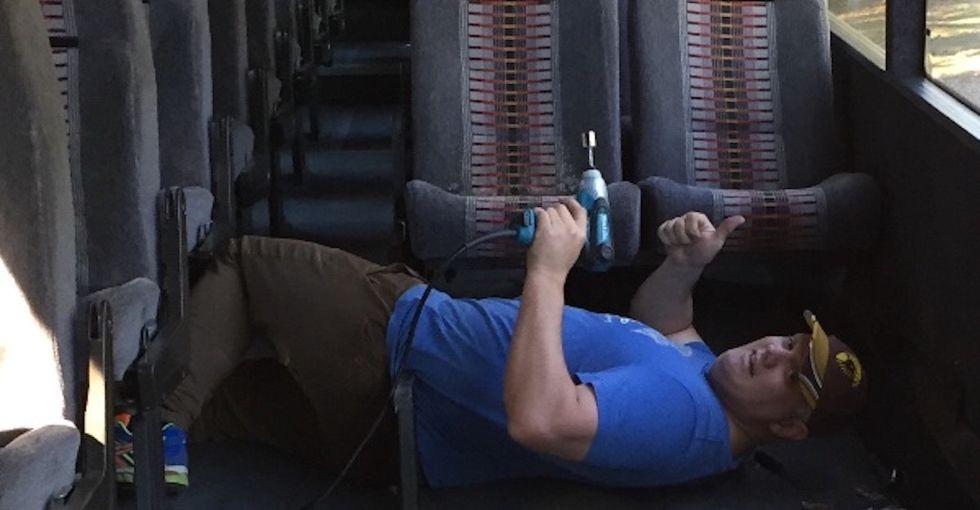 In 1993, Simon Rowe hit hard times, and the only place he had to sleep at night was his car.

Two decades later, and no longer homeless, Rowe started looking for a way to give people who are homeless in Melbourne, Australia — like he had been — a place to lay their heads at night.

He explored a bunch of options, and eventually he decided to buy a charter bus, which he’s calling the Sleep Bus.

Rowe in his first bus. All photos from Sleep Bus, used with permission.

Rowe plans to use a fleet of more than 300 buses to aid Australia’s struggling homeless population.

Over 100,000 people are homeless in Australia right now, and more than 6,000 don’t have a place to sleep. Sleep Bus will hopefully provide these folks with private temporary living spaces to rest while they get on their feet again.

To fund his passion project, Simon set up a GoFundMe campaign to scrounge up the funds for his first bus.

Within a month’s time, the campaign received donations from all across the globe. Wildly, they raised not only enough money for the first bus, but they're very close to fully funding their pilot program too, which Simon plans to launch in June 2016.

Sleep Bus is similar to a shelter, but with some key differences.

The Sleep Bus is designed to give every occupant their own personal space. Every bus will have 22 sleep pods, two toilets, a personal locker for each guest, eight kennels for animals, and a security system.

Parents will also be given control over the lock of their children’s pods, and there will be an intercom system between them. The bus’s mobility will also allow it to set up camp wherever people who are homeless congregate, as homeless populations tend to change with the seasons.

As for the pods, they’re set up more like hotel rooms than shelters — and that’s a good thing.

Each pod will be outfitted with its own freshly washed linens, a charging station for electronics, a door with a lock that each guest will have control over, climate control, and a television. In addition to regular programming, the TVs in the pods will have a special channel running ads for local support services.

“The TV is strategic, the TV is to help people stay calm, stay quiet ... but it’s also about connection as well,” Rowe explained. “It’s for that connection — to catch up on the news, or shows they used to watch, or to find out what’s happening in the world that they may have missed. To start them thinking on the path out of homelessness.”

But a place to sleep is, of course, only one piece of the puzzle that is homelessness.

Rowe acknowledges that Sleep Bus is just one solution to one problem for people who are homeless. They also need clothing, food, somewhere to shower, a pathway to permanent shelter, and — as Rowe pointed out — hygiene products for women. “As a man, I’d never thought of that before,” he admitted.

But he also hopes that the buses will be a good place to start, especially because a good night’s rest is a stepping stone toward aiding the even bigger issue of mental illness among the homeless.

Some reports indicate that in Australia up to 85% of folks without a home suffer from severe mental illness. Lack of sleep tends to make existing mental health conditions worse, and some symptoms of mental health problems can be alleviated by sleep. This makes resources like the Sleep Bus an important piece in solving the problem that is homelessness.

Sleep Bus has a lot of potential — but it all starts with that first bus.

There’s still a lot of work to do until the first buses launch in June, but that hasn’t deterred Rowe in the slightest. In fact, the short timeline seems to have energized him.

"Perhaps a young lad has problems with mom and dad, ends up out on the street,” Rowe said, "We'll catch this person. They won't fall deeper into the cycle of homelessness."

Simon hard at work converting his new bus into a Sleep Bus.

Rowe's unique idea for helping people "sleeping rough" on the streets is one filled with hope, and it has resonated with thousands of people already.

If you're interested in learning more and potentially helping Sleep Bus, you can consider donating on Rowe's GoFundMe page.