This delightful comic shows why salamanders are awesome and need our help. 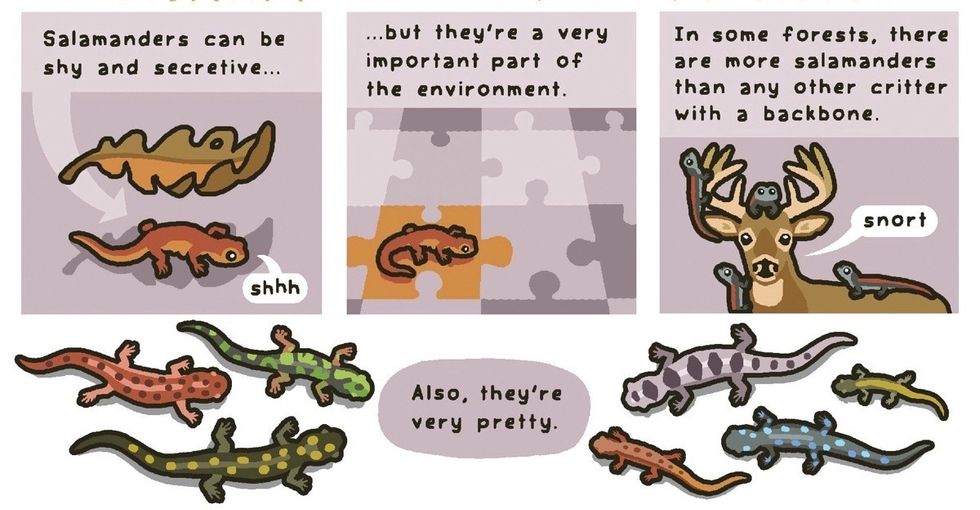 Rosemary Mosco has made comics about all kinds of animals, from agoutis to eels. But she says she's got a soft spot for salamanders.

"I feel like everybody has an animal, plant, or other creature that really clicked with them and pulled them in," said Mosco. For her, it was the blue-spotted salamander.

"They're colorful, long-lived, mysterious, and secretive, with a cute little smile. They belong to a hidden underground world that's right there, out in the woods. I've been hooked ever since."

Mosco is a field naturalist, science communicator, and the artist behind the delightful science and nature comic bird and moon.

Back in 2015, she made an awesome comic about why salamanders need our help.

Comic by Rosemary Mosco, used with permission. Original can be found here.

Bsal is scary for our salamander friends. It isn't in the United States yet, but people are being super careful about it just in case.

Hoping to stop the spread of Bsal, in June 2016 the U.S. Fish and Wildlife Service restricted 200 species of salamander from being imported to the U.S. or carried across state lines.

If you need another reason to love salamanders, they help keep our forests and ecosystems healthy by eating a ton of insects and other creepy crawlies, like ticks and mosquitoes. Plus, they are part of the food chain too and go on to feed bigger animals like turtles, birds, and fish!

"People protect what they love, and I want to help them love salamanders," said Mosco.