This farm team has been converting vacant lots to tiny farm plots all over Minneapolis since 2011. 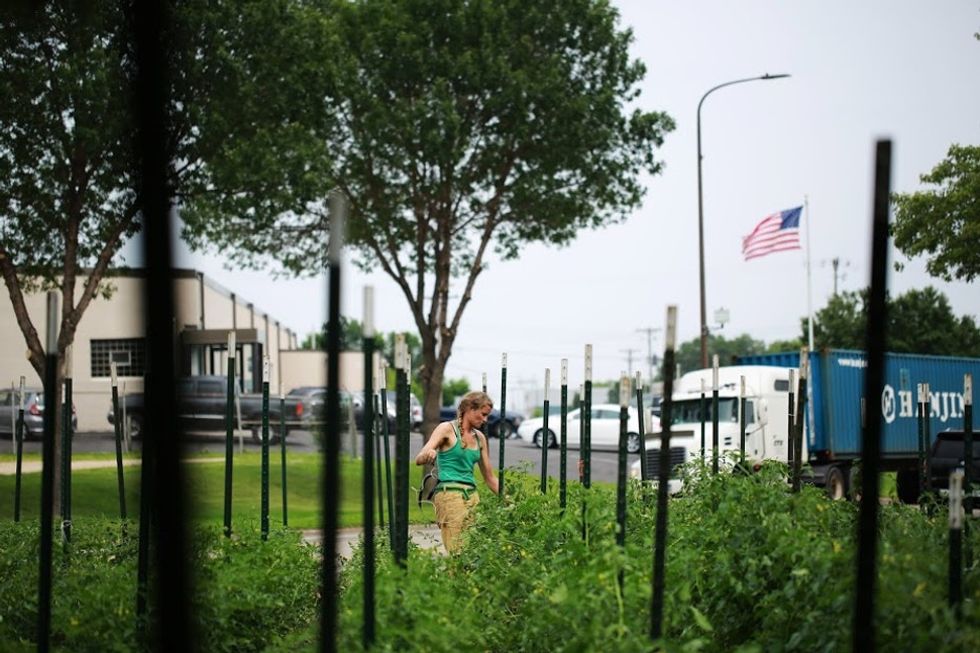 If you ever find yourself walking through the heart of Minneapolis, keep an eye out for something unusual: a farm.

What — a working farm plot in the middle of a city? Yep.

16 different farm plots, to be exact, across Minneapolis–St. Paul.

A Stone's Throw lot in the Twin Cities. Image by Carina Lofgren Photography.

Since 2011, Stone's Throw Urban Farm has been busy morphing vacant lots in the Twin Cities into farms that give back to local communities.

"[Our lots] range in size from 0.11 acres to 0.5 acres," farm employee Caroline Devany explained to Welcometoterranova. "Most ... were formerly residential spaces, but several have had less conventional past uses, such as a bowling alley parking lot and [a] funeral home."

So, tell me again why we don't just convert all our unused urban space into farmland?

Farming in the city is a bit out of the ordinary, so it understandably comes with a unique set of challenges.

Though a bowling alley may sound like a cool place to grow onions (or kale, or oregano), the soil quality of vacant lots is another issue entirely. Many of the plots used by Stone's Throw have soil that requires careful attention and added nutrients.

Stone's Throw uses waste from local breweries to produce compost that can help bring depleted soil back to life.

But being "part of, and accountable to, multiple communities," as Caroline explains, provides the farm with many opportunities for unique solutions to match those challenges.

As a visible part of so many different communities, Stone's Throw tries its best to be a good neighbor — and it has many neighbors. The farm offers a sliding scale, EBT-accessible market stand and hosts volunteer and skill share opportunities for the community.

They also partner with rural farms outside the city (who lack the urban advantage of visibility) in a cooperative called Shared Ground.

Of course, this uncommon land use doesn't come without its naysayers.

The aftermath of the 2009 foreclosure crisis allowed space for new ideas about best uses for land. Areas that had previously housed commercial businesses were suddenly available for new, creative uses. That's what allowed Stone's Throw Urban farm to get up and running — with so many vacant lots, the city was open to using some of them for farming.

An aerial view of one plot in St. Paul. Image via Google Maps.

As a result, sustainable land access is one of the biggest challenges faced by Stone's Throw. In fact, the farm's future may depend on their ability "to better articulate the ways that urban agriculture is a form of development with many benefits to urban residents."

But the Stone's Throw team is determined and optimistic.

And they're not about to let the challenges of urban farming get in their way.

What's more, they're noticing changes in the way the community — and policymakers — talk about issues of food and development. And that gives me hope.

It's not easy to cultivate healthy and just communities, but a little grit and diligence can go a long way. A fondness for weeding probably doesn't hurt either.