This gang of Chihuahuas is why older dogs deserve all the love in the world.

Age is really just a number. Even if you're a dog. 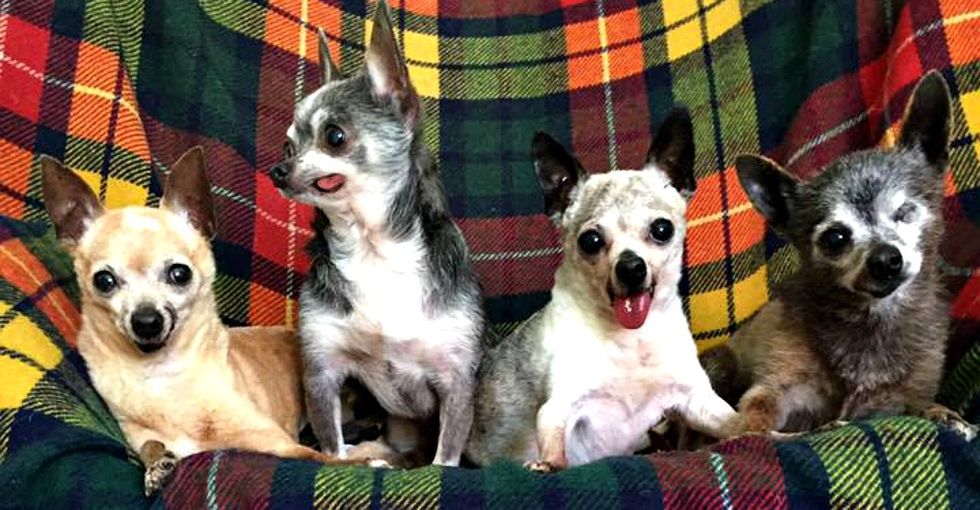 And honestly, how could you not?

The newspaper clipping where Docherty first saw MoMo (she later shortened his name). She held onto it for years.

Even though she had only just moved to Los Angeles, she was so taken with this little face, she simply had to have him. So she headed over to Tiny Loving Canines Rescue (TLC), and with their support, she brought MoMo home.

MoMo had been neglected by his previous owner and thus needed some extra care. Docherty was more than up to the task, and as a result, their bond grew exponentially.

According to Docherty, MoMo's super calm but also a people-pleaser, aka the perfect dog.

"I realized how ideal having a more mature pup was and how bringing him along to work with me was easier than I had imagined," Docherty wrote in an email.

Now she has a proper Chihuahua posse.

From left to right in the top photo, meet Choli, Paloma, Benito (also known as RL or "Really Literally"), and MoMo. Docherty rescued Choli and Paloma from TLC, the same organization where she found MoMo, and Benito/TL from Animal Synergy.

Now that they're together, they're pretty much an unstoppable force of hilarity and cuteness.

And their owner couldn't be happier with her "mature" charge.

Docherty with her four pups and a friend. Photo by Julie Docherty.

They love greeting the mailman.

Mailman reactions... some are more phased than others. Senior rescue security Mo, Paloma, and RL. (Regretfully, Choli got trimmed out of this video, however he remained comfortably licking his paws.)⭐️ #goingpostal

And of course, taking naps. Well, some of them anyway.

Only Choli was interested in participating at this morning's attempt of a group photo. #coldshoulders 🙄

"When he gets to know you, he becomes a fearless rag doll who will throw himself onto you," Docherty said.

And Benito squeaks like a cat when he's excited.

"This is my most recent portrait. Don't I look FABULOUS?"

And finally, Sir MoMo, the original senior Chihuahua, is the lover.

"He's gentle and sweet and loves meeting people, which is pretty special for Chihuahuas who can be a bit overprotective," wrote Docherty.

Sure, it's not the easiest taking care of elderly dogs, but Docherty says the rewards far outweigh the costs.

None of the pups have teeth anymore, and they all take meds for arthritis, but that doesn't stop them from being playful and loving with their human mom and each other.

So if you're thinking about adopting a dog, don't overlook the older ones. They might not be as spry as puppies, but they possess all the cuteness, silliness, and warmth you could want in a dog with maybe just a bit more of a yen for naps.