This glow-in-the-dark bike path shows what happens when you let imaginations run wild. 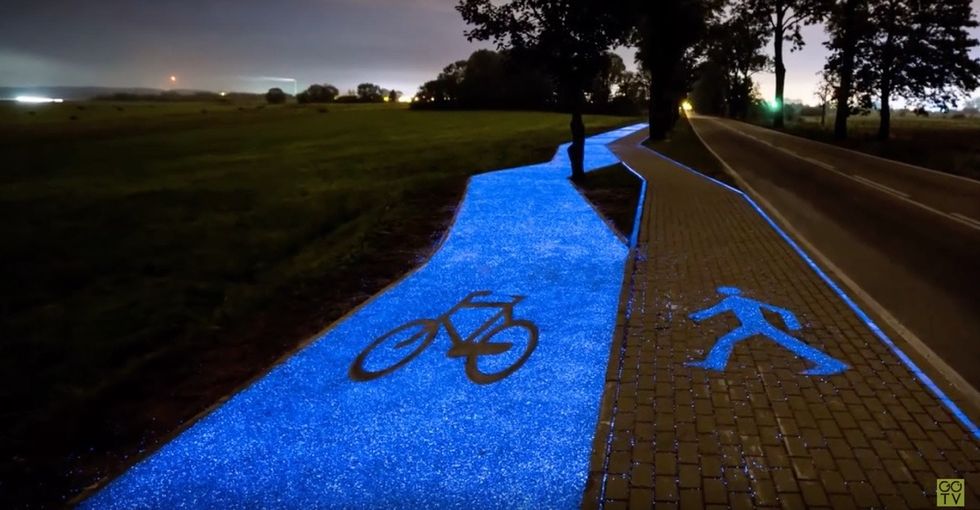 And no, that's not what you see after you die. That's a bike path in Poland that's designed to glow in the dark. It was unveiled near the town of Lidzbark Warmiński in late September.

It glows blue because of special luminophores built into the pavement.

The synthetic materials absorb energy from the sun during the day and slowly release it at night. The company who built them says they can last for more than 10 hours at a time.

The company that built the path said they were inspired by the Netherland's "Starry Night" bike path but decided to take it a step further. While the "Starry Night" path uses electric LEDs, the new blue path needs no electricity whatsoever.

The path is a test run to see if the technology can be used on a wide scale all over the country.

Right now, the track is only 100 meters long. It's currently being tested to see if stands up to weather and traffic and whether they can build it more economically. Currently, the path seems to be more of a novelty than anything else — a way to beautify the biking experience — but if the results hold up, it's possible we could use this glow-in-the-dark technology to help improve road safety all over the world.

(By the way, the company that built this has also experimented with trying to impregnate asphalt with citrus, strawberry, and rose scents.)

Cycling is an awesome way to commute, get exercise, and clean up the environment.

A lot of European cities have embraced the bike, and many American cities are catching on as well.

While we still need to improve our biking infrastructures overall, this glow-in-the-dark road shows that infrastructure projects don't have to be boring. They can be imaginative, innovative, and beautiful, too.