This hit show addressed police violence with a fake commercial that felt all too real. 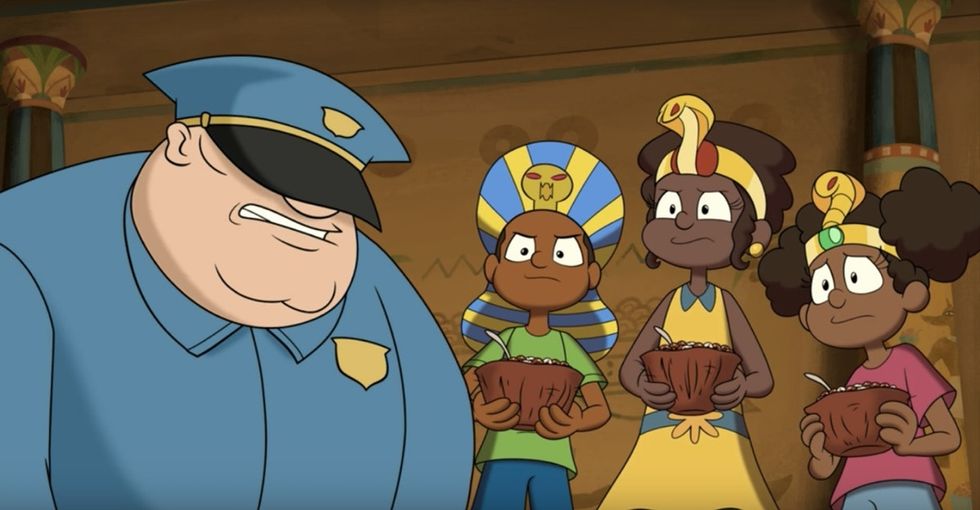 The Oct. 11 episode of FX's new comedy, "Atlanta" delivered on all fronts.

The bold, daring comedy follows Earn Marks (played by Donald Glover) as he manages his cousin Alfred, an up-and-coming rapper who goes by "Paper Boi" (played by Brian Tyree Henry).

But it was the commercial parody for kids cereal Coconut Crunchos that set the episode apart.

In the short spot, a few black children explored ancient tombs (just go with it, kids' cereal commercials are ridiculous). Then, they discovered their treasure: a spread of delicious bowls of Coconut Crunchos. But just as they arrive, a wolf dressed as a mummy jumps out and tries to nab their breakfast.

That's when the commercial takes an alarming turn.

As the wolf attempts to swipe their cereal, an all-business white police officer grabs the culprit and lays him out.

All GIFs via FX Networks/YouTube.

The wolf was handcuffed and roughed up while the children looked on.

The kids tried to reason with the officer — after all, it's just cereal. But he wasn't having any of it. So one of the kids took out their cellphone and started recording the entire exchange.

So much for the most important meal of the day.

While the parody was only 90 seconds of laughing through tears emoji emotions, it was rooted in an all too common truth.

Over-policing isn't just police zeroing in on specific populations or communities. It's about the hyper-militarization of local police forces, school administrators passing the buck on discipline to in-house police officers, and less serious offenses being treated as anything but.

Protesters hold up their hands and chant "hands up, don't shoot!" as they protest the decision not to indict a police officer who used a chokehold in the death of Eric Garner. Photo by Scott Eisen/Getty Images.

Black people are not making this up. We're not exaggerating. Just getting from Point A to Point B can be a matter of life and death.

So, it's no wonder the commercial resonated with so many viewers.

The reactions were swift and plentiful, with many surprised to see the issue of police brutality brilliantly juxtaposed with a kid's cereal commercial.

As such, the joke was nearly overwhelmingly met with praise.

Others cheered "Atlanta" for broaching the topic in such a unique way.

The writers on #AtlantaFX are pushing themselves and the people are rewarding them. We want real topics and issues presented creatively.
— mikeyworldpeace 🐼 (@mikeyworldpeace 🐼)1476295272.0

It's great to see shows like "Atlanta" and "Luke Cage" addressing the systemic issues faced by African-Americans in creative, surprising ways.

The lead characters may have superpowers or live in a slightly off-kilter reality (Black Justin Bieber anyone?) but the topics they're signal boosting are very real. And people of all backgrounds are taking notice. It remains to be seen if they'll take action.

Watch the full commercial for yourself. With or without a balanced breakfast.